Yeah, vultures actually serve a purpose in the food chain.

This is neat. The university of Galway in Ireland is actually leading the educational field in developing an comprehensive and realistic program on sexual consent education.

One of the primary criticisms of the old "no means no" and "yes means yes" slogans and other similar campaigns about consent is that, well, that doesn't really reflect how people, you know, actually behave in the bedroom (or in a phone booth or wherever if y'wanna get crazy, I won't judge). The "Would you like a cup of tea?" UK campaign was probably the best iteration of that sort of thing, but was still essentially limited to the same bounds.

I think most of us realize that sexual consent can be complicated and often involves many different forms of communication, including a lot of entirely nonverbal cues, so I think it's awesome that there's a group out there that's saying "Yes, we can account for this with real education" and actually put together a concrete program that reflects this, as opposed to leaving the "but ambiguity!" argument to the trolls and rape-apologists as has mostly been the case so far.

I dunno if it's possible to boil this down to a core you can use in a public campaign like the cup of tea one to cover the essentials (hey, this may not be possible), but if so the information is here for an incredibly powerful and useful education campaign. 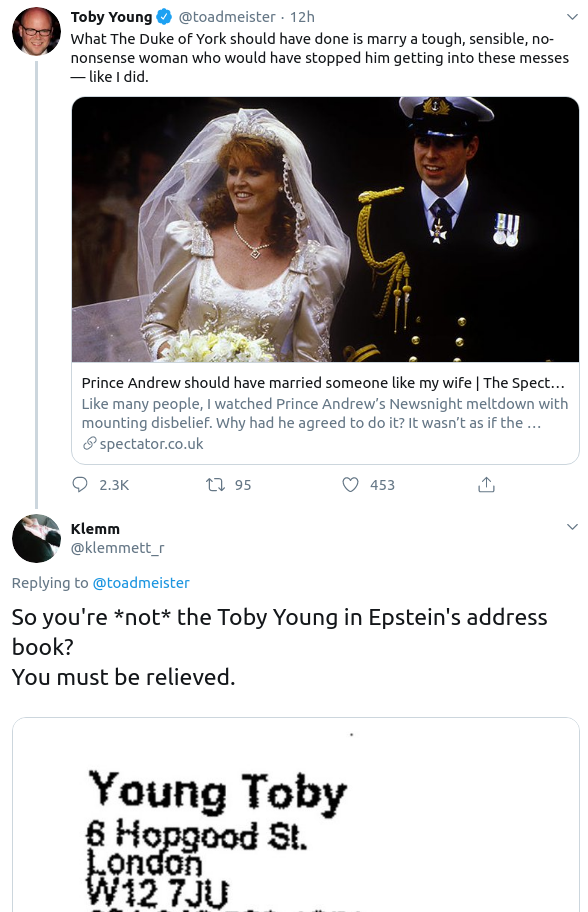 Wasn't the point of that interview to poison any possible jury selection process?
Top

One tweet by Young was in response to a BBC Comic Relief appeal in 2009 for starving Kenyan children.[89] During the broadcast, a Twitter user commented that she had "gone through about 5 boxes of kleenex" whilst watching. Toby Young replied: "Me too, I havn't [sic] wanked so much in ages".[58] He has expressed remorse for his "politically incorrect" tweets.[90]

When your transphobia goes so hard you end up trying to legalize pedophilia.
Top

Oh god I didn't even think of that angle.

Off topic, but I saw a tweet somewhere that went something like "I don't really care about politics. Now, let me tell you how much I hate my boss, my job, my health insurance, and my public transit system."

I do wonder how much of the apparent global hard right wing death spiral is just a desperate retreat from the knowledge that Everything is a Spectrum.
Top

Today I learned that this is service people do (it's a good service even if the subject is creepy and awful!).

Heidi MacDonald has an article up called Warren Ellis: 20 Years of the Bastard, which links Inside the Comic Book Industry’s Sexual Misconduct Crisis—and the Ugly, Exploitative History That Got It Here, by Asher Elbein at the Daily Beast, So Many of Us, a site for firsthand accounts of Ellis's predatory behavior, and Women speak out about Warren Ellis: 'Full and informed consent was impossible', by Sam Thielman at the Guardian.

It's all pretty awful stuff even without getting into detailed accounts.

And Heidi notes that Ellis's pattern with women seems to extend even to relationships that aren't romantic or sexual; she says her own relationship with him was purely professional but follows a similar pattern where he initially praised and helped her but eventually ceased to acknowledge her.
Top

The recent stuff with the CBLDF hurts more, from my perspective; it wasn't just a single creator whose work I enjoyed, it was an organization that has done some real good.

It's described in the Daily Beast article I linked. I find that article particularly edifying because it ties the behavior of people like Ellis, Stewart, Brownstein, et al back to the fundamentally exploitative nature of the comics industry and the power imbalance it's been cultivating since the '30s. (But note that it's not just a high-level view, either; all those links imply varying degrees of CW, but the Daily Beast link goes into detail about the allegations against Scott Allie.)

As for the Guardian:

Sam Thielman wrote:And Ellis himself is as influential as the spaces he created: he could be credited with pioneering the “widescreen” movement in his comic The Authority, which starred ersatz versions of the Justice League. Ellis’s writing style transitions as easily to the movie screen as the name implies, and his work has been used extensively as reference material in Marvel films. (The US president in the film Iron Man 3, adapted directly from Ellis’s Iron Man comics, is named Matthew Ellis.) His comic Red has been made into two Bruce Willis action-comedies. His ongoing Batman series, The Batman’s Grave, promises to influence a new generation of creators of comics, film and TV. And Transmetropolitan, a cyberpunk comedy about a crusading journalist – and perhaps his most famous work - inspired artists, writers, reporters and several of the women speaking out against him.

...this is usually the place where I put my "credit the artists, god dammit" rant, but you know what, just this once I think leaving their names out of the article is okay.
Top

A Satanic Abortion is a religious ritual that is totally indistinguishable from a normal, medical abortion, except that the participant says a few self-affirming words about her bodily autonomy.

If you want an abortion and the doctor tries this bullshit, hand them one of these exemption letters explaining how the law doesn’t apply thanks to the [Religious Freedom Restoration Act].

Now, the religious right could fight this. But if they win…they overturn the RFRA, and Hobby Lobby has to provide its employees with contraception and all the other theocratic exemptions go poof, too.

I think Doctorow is being a little optimistic on that last part -- it's not hard to imagine a Supreme Court ruling that "nah, the Satanic Temple isn't a real religion and the federal standards that recognize it as such are wrong" -- but as always I appreciate the Satanic Temple's tactic of using "religious freedom" laws to promote freedom from religion.
Top

Extremely well-written article by model Emily Ratajkowski about how hard it is to own your own image, and how easy it is for other people to profit off of your image, ranging from paparazzos to fine artists and in between.

I think we're pretty aware that the trope of "being paid in exposure" is a real thing, but it's fascinating and horrifying to see a case where it's actively destructive you professionally and very personally once you get to her level of fame because you're viewed as too famous to have these problems.

Could probably use a content warning for sexual assault there.

At any rate, there's a lot going on there and while I understand the common theme of lacking ownership of her image, I'd say the paparazzi photos, Richard Prince paintings, and Jonathan Leder photos are all qualitatively different examples (respectively: photos taken without her consent; transformative use; "consensual" photos taken under predatory circumstances that should be illegal, then published outside the agreed-upon terms, which is illegal but fat lot of difference that makes if you can't afford the cost of a lawsuit).

Aside from the obvious misogyny involved in men feeling entitled to images of women's bodies (and, in Leder's case, to a woman's body itself), these stories have implications about all sorts of other issues, including copyright, work-for-hire, and the legal system. As usual, publishers are predators, work-for-hire is predatory, and business and law are both rigged systems.
Top
Post Reply
423 posts