Our Boys In Blue

Well I mean it doesn't mean they're going to start killing people.

There's nothing else it could possibly mean. Uh, the police are planning to kill people, you guys.

Nah. Just a cultural milestone in police pride. Society has finally made enough social progress that they feel safe coming out of the closet.

Brentai wrote:Well I mean it doesn't mean they're going to start killing people.

There's nothing else it could possibly mean. Uh, the police are planning to kill people, you guys.

I uh, I think we already know about that particular "secret" plan.

Oh well then it's nothing new to worry about then is it? Phew.

sei wrote:Minneapolis must be running out of brown people.

These signs have started showing up in the Twin Cities: 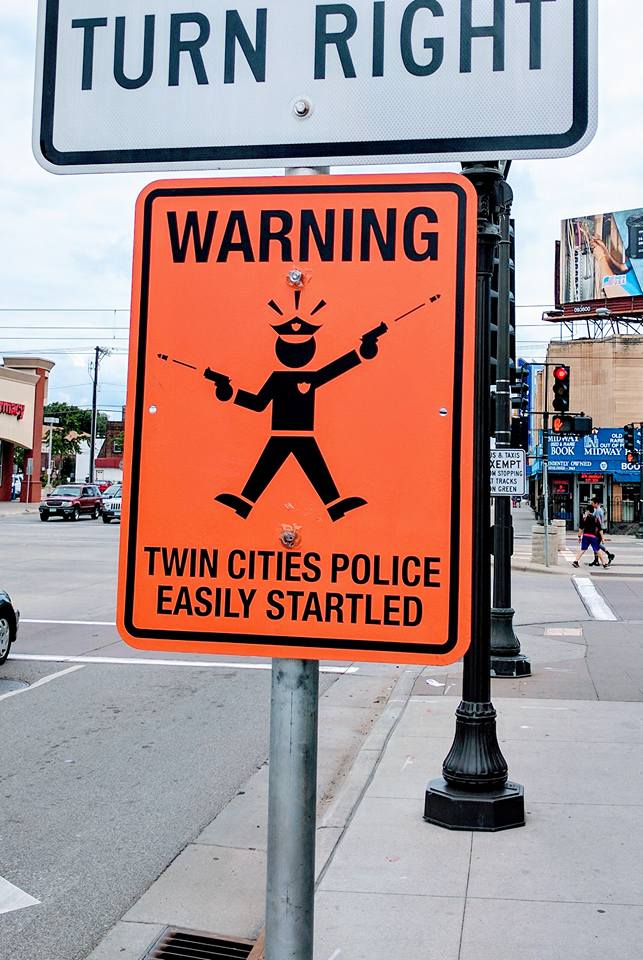 I hate to repeat myself, but the whole phrase is "a few bad apples spoil the whole barrel." And we're way past just a few.

Yet I still cannot shake this feeling of revulsion at the laughter and applause that the actual officers engaged in during 45's tirade.

There are some people in the video, like this one woman over to the right of Trump that you can see nervously laughing and only very lightly clapping because they are in a room of people applauding and he's the President, but it's still not a great look for cops.

But here's the thing, we know a lot of cops are assholes and I honestly think they always will be, even in a society that is healthy. What is more shocking to me is that you have a President who is so populist, he'll attempt to appeal to the basest and least admirable emotions of the police force. As disgusting a display as that whole room is putting on, Trump still manages to be the grossest thing in it by a noticeable margin.
Top

NPR: ICE detains American citizen for over three years without charge or legal representation. When he is finally released, he attempts to sue for compensation only to be denied because he was led in custody long enough for the statute of limitations to run out.

Guess what colour his skin was!

The article also says that similar situations are inflicted on over 600 US citizens per year.

Mongrel wrote:Guess what colour his skin was!

Mongrel wrote:Guess what colour his skin was!

Hm, well I suppose he was probably denied medical attention too.

So, St. Louis is bracing for impact in the Jason Hockley case, putting up barricades and such in case of massive rioting.

If you haven't heard, Hockley was a cop who 1) chased a fleeing suspect, after saying "Going to kill this motherfucker, don’t you know it," 2) rushed out of his car with a personally owned AK-47 pistol, 3) shot the unarmed guy five times point blank and then 4) planted a handgun in the victim's car that only had the cop's DNA on it.

Can't wait to see how the defence gets him off (Hockley waived a jury trial - this is Judge-only)!

O/U on how much of St. Louis gets burned down?

It's Jason Stockley. You got the name wrong.
Top

Speaking of racist cops, turns out one of the Florida "Hot Cops" that went viral in the leadup to Irma hitting may have milkshake ducked.
Top

My initial unthinking gut reaction was "I hope they fucking burn St. Louis to the ground".

I mean fuck off, this is beyond ridiculous.

EDIT: The Judge even waited for the Cardinals to be on a two-week road trip to announce the verdict and to warn all the local authorities (my buddy who does appeals in MO says he got a notification this morning that the State Supreme court would be closed tomorrow and rightly guessed that meant the verdict was coming down today). They knew this was coming and they couldn't be bigger dicks about it.

A couple other facts.

In MO, in a judge trial, the Judge can choose to find the defendant guilty of a lesser charge. So it's not a case of the prosecutor overreaching by asking for Murder One. Stockley wasn't just found innocent of Murder One, he was found innocent of all applicable charges, including Manslaughter.

They didn't even fucking get him on planting evidence, FFS.

Regarding whether the victim possessed a gun to justify his fears of getting shot (despite the only gun in the victim's car having ONLY the officer's DNA on it): "Finally, the Court observes, based on its nearly thirty years on the bench, that an urban heroin dealer not in possession of a firearm would be an anomaly."

"The Court finds the State's contention that Stockley planted the handgun found in the Buick is not supported by the evidence."

Seriously, fuck this Judge with a combine harvester.