Brentai wrote:Or in other words, it's slowed because practically everybody who's ever going to be for it is for it.

No, if that were true, it wouldn't still be growing.

And I say "at least" because support for the inquiry is *also* still increasing.
Top

I guess just say whatever the fuck you want

I know that posting Fox in this thread is cheating, but even so

He's right. We should take the money out of politics.

You know, bribery is what members of Congress do every day, when they take all kinds of money from interest groups … So, I mean, if we're going to call it bribery, then everybody's guilty.

So here's the kind of headline that I find absolutely infuriating.

The Hill has an article titled "Poll: 40 percent of voters say impeachment inquiry is moving too slow."

The Hill's at it again.

Also of note: on even this bullshit poll Bernie is trailing Biden by less than the margin of error.

Right now, unless someone dies or actually listens to Biden, it's looking like Biden v. Bernie with the loser determined by who Warren splits.

It's just too bad vice presidential picks are after primaries. Warren somehow deciding fuck Biden and going as Bernie's VP would just be sooooo gooooood. The idea of Bernie taking Biden as a VP to get more support for the race against Trump scares me.

beatbandito wrote:Right now, unless someone dies or actually listens to Biden, it's looking like Biden v. Bernie with the loser determined by who Warren splits.

That's not a thing in the Democratic primary, unless no candidate wins a majority and there's a brokered convention.

It's not perfectly proportional; there are probably a few scenarios where it's technically possible to win a majority of delegates without quite making 50% of the vote. But, generally speaking, winning the Democratic nomination means getting more votes than all the other candidates combined.

Now, it *is* possible for a split vote to result in no candidate getting an outright majority, and the convention going to second ballot. That would be a gigantic goddamn clusterfuck. But it's also never happened under the current primary system; it's one of those things pundits get excited talking about every four years, but that's precisely because it's such an unlikely occurrence. (I'll grant it's likelier in 2020 than it usually is, but it's still unlikely.)
Top

As far as declaring this a race between Biden and Sanders based on a national poll two months before the primaries start, Presidents Dean and Giuliani would like a word.

The race is still extremely fluid. And we don't have a national primary. The early states have an outsized influence; Kerry's unexpected win in Iowa, and Dean's underperformance in coming in a distant third, completely reshaped the 2004 race.

What happens in Iowa and the other early states will affect how people vote in later ones. For that reason, you're a lot better off looking at early-state polls than national ones right now. The rub is, state polls are less reliable than national ones. If you look at recent Iowa polls, the only thing that they agree on is that Buttigieg is doing way better than he was a couple of months ago, and Biden, Sanders, and Warren are all somewhere in the top four with him. I think any of the four has a solid chance of winning Iowa. (Klobuchar may even have a shot. I wouldn't bet on it, but she's up in the latest poll, and doing about as well as Kerry was in 2003.)

Here are the potential Iowa outcomes I can see:

Biden wins Iowa. Result: the media narrative positing him as the frontrunner gets even stronger; he's going to be hard to beat.

Sanders or Warren wins Iowa. Result: the media narrative becomes "there's a big upset, and this candidate is now the frontrunner." Biden stays in the race for the time being and probably still wins South Carolina, but he's on the back foot now; he's no longer a sure thing. People who were backing Biden because they thought he had the best chance of winning the general see him losing multiple primaries in a row and start to jump ship. He's still got a shot, but it's not going to be easy for him.

Buttigieg wins Iowa. Result: the media narrative becomes "there's a big upset, and this candidate is now the frontrunner," but Mayor Pete's total lack of support from black voters is going to make the Democratic primary a tougher row for him to hoe than the other three candidates in the top four. In this scenario, the Iowa Caucus probably winds up looking like it did for Republicans in the last three elections: a one-off that temporarily breathes some life into one of the lesser campaigns, but ultimately doesn't have that much impact on the nomination.

Somebody else wins Iowa. Result: the media narrative becomes "oh my God, there's a huge upset, and this candidate is now the frontrunner. " I don't know what happens next in this scenario.

It's also possible I'm completely off-base here and something entirely different happens after Iowa than the scenarios I've outlined. I was, of course, completely wrong about Trump's chances in 2016. I also figured McCain was toast at this point in 2007, and I sure as hell didn't see Kerry getting the nomination at this point in 2003. That's kinda the point I'm making: these things are unpredictable. Polls are useful; statistics is a science. But by its nature it's an imprecise one. There's a lot of uncertainty here. We can make some educated guesses -- Castro probably ain't gonna be the nominee -- but our knowledge is incomplete, polls only tell us so much, and even insofar as they're an accurate snapshot of public opinion today, public opinion could be different two, three, four months from now.
Top

Thad wrote:As far as declaring this a race between Biden and Sanders based on a national poll two months before the primaries start, Presidents Dean and Giuliani would like a word.

Worse, I'm basing it on Twitter a year ago.

Warren voters would go either way between Bernie or Biden person to person, but far less of either B-Boy's posse would go to the other willingly.

beatbandito wrote:Warren voters would go either way between Bernie or Biden person to person, but far less of either B-Boy's posse would go to the other willingly.

That's not really what the polls are showing.

Voters’ Second-Choice Candidates Show A Race That Is Still Fluid

As of the most recent polls, Warren voters are much likelier (30%) to name Sanders as their second choice than Biden (19%). Sanders-Warren is 31%, Sanders-Biden is 26%, Biden-Warren is 19%, Biden-Sanders is 26%. With the caveats I mentioned before of polls being imprecise and public opinion being highly malleable at this stage in the game.

And that's just second choice. Where do those third-, fourth-, and fifth-choice voters go if the race narrows to two candidates? That's a complicated question.

As far as voters with no second choice, this polling data is a little older (October), but it's what I could find offhand:

Most 2020 Candidates Have Something In Common: Their Supporters Also Like Warren

That supports your contention that the candidates whose supporters are most likely to be considering them and no one else are Biden (22%) and Sanders (15%), but that also demonstrates that the vast majority of their supporters *are* considering other candidates. It also bears noting that they're the candidates with the strongest name recognition; some of the people saying "I'm only considering Biden" are saying that because they haven't been following the race and don't know anything about the other candidates (and may not even know who else is running).

I suspect that there's some of that going on with Sanders, too, but I also think that his supporters are a lot more loyal than Biden's. Like I said before, a lot of people are supporting Biden because they think he's got a better shot of winning than the other candidates; if he starts losing primaries, that's going to really hurt the perception that he's the strongest candidate. A string of losses could easily snowball, though he's popular in the South and even if he loses I think he'll hang on awhile first.
Top

Thad wrote:As of the most recent polls, Warren voters are much likelier (30%) to name Sanders as their second choice than Biden (19%). Sanders-Warren is 31%, Sanders-Biden is 26%

What the fuck? Seriously, what the fuck? How the fuck can a quarter of the people who prefer Sanders think Biden is better than the rest of the field?
How fleeting are all human passions compared with the massive continuity of ducks.
Top

Again, I think it probably comes down to name recognition. If you can only name two Democratic candidates, it's probably going to be those two, the former VP and the guy who came in second place last time. Sanders-Biden is a counterintuitive combination, but it's worth remembering most people aren't paying as much attention to the race as we are.

TBF I saw someone on another forum say they saw the piece and it was all about how well Bernie's doing. So whether this is just a fuckup or deliberate (and deliberate is a reasonable guess given how often it happens), it sounds like it may be on the part of the person who does the chyrons, not John King.

A previous version of this story misquoted Haskins' tweet. She wrote "lmaoooooooooo," not "lmao." We regret the error. 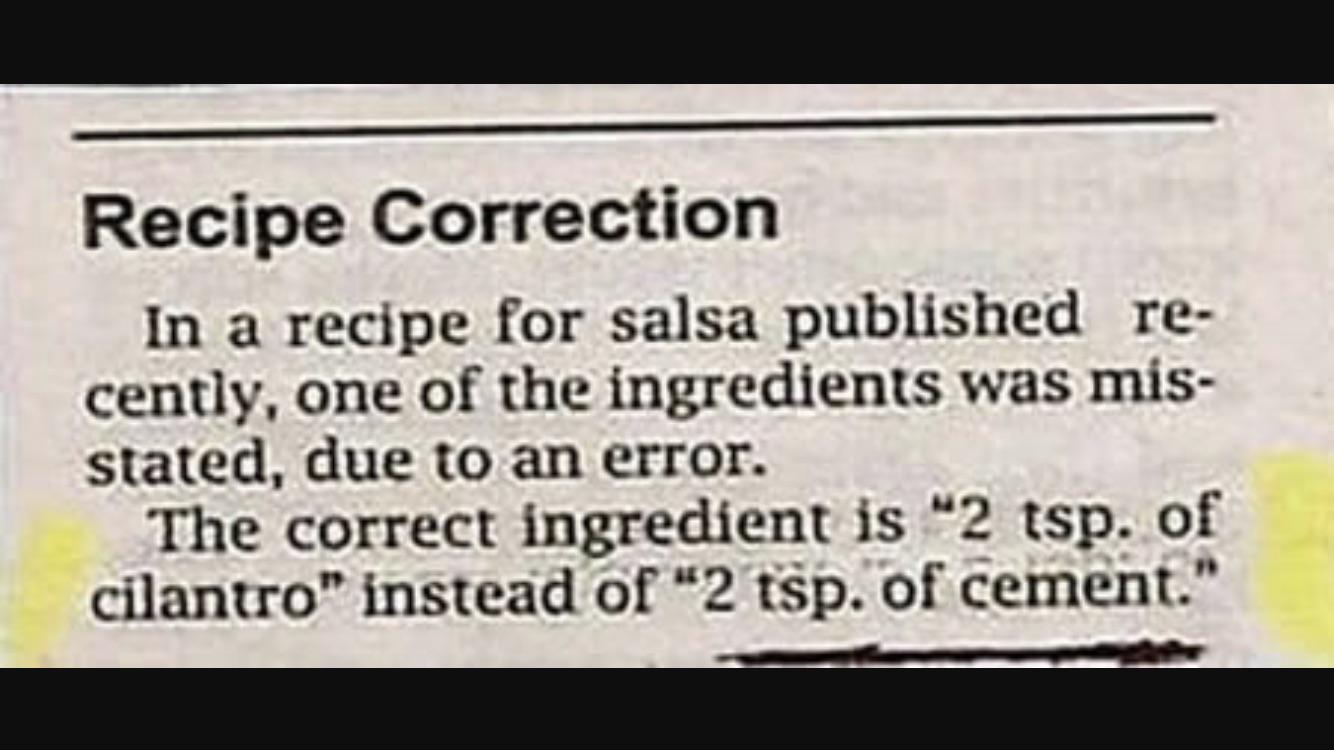 It's funny how this sort of error is such that before the age of machine-corrected spelling, it would have had to have been deliberate.