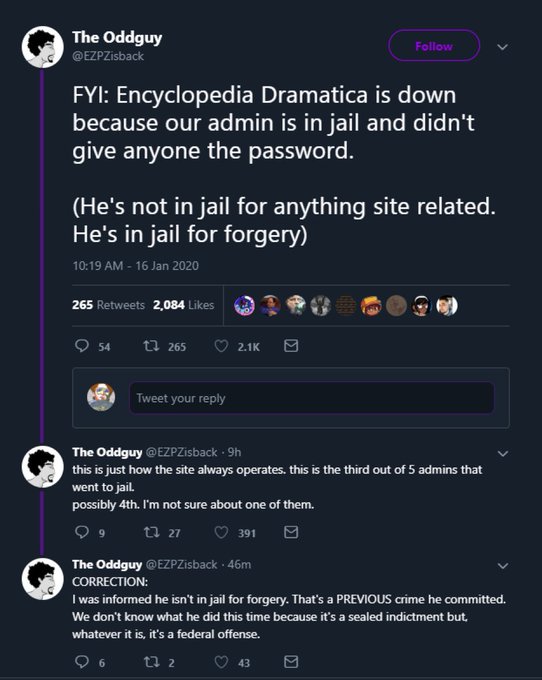 ED being run by literal criminals?

I don't expect this to be topped all year. It's made me so cynically joyful.
Top

It makes no difference to me.
Top

Not the ideal outcome but it's something, and he's still got another trial coming in LA.
Top

Actual quote from a Weinstein attorney: "Harvey's unbelievably strong. He took it like a man."

There are still appeals to come, but he's also still awaiting trial in California. Motherfucker is going to die in prison.
Top

An Australian astrophysicist has been admitted to hospital after getting four magnets stuck up his nose in an attempt to invent a device that stops people touching their faces during the coronavirus outbreak.

I was just coming here to post that same article.
It gets better the further in you read.
How fleeting are all human passions compared with the massive continuity of ducks.
Top

Oh my god I missed that he's in Melbourne. Ahahaha, time to razz some friends mates...

ABC: Engineer derails train in attempt to crash it into the USNS Mercy docked in Los Angeles

Moreno allegedly told officers and FBI investigators that he deliberately derailed the train because he was suspicious of the Mercy's intentions and thought it was actually part of a government takeover, the complaint said.

"Moreno stated that he acted alone and had not pre-planned the attempted attack," according to a statement from the U.S. Attorney's Office in the Central District of California. "While admitting to intentionally derailing and crashing the train, he said he knew it would bring media attention and 'people could see for themselves,' referring to the Mercy."

In an interview with FBI agents, Moreno stated that "he did it out of the desire to ‘wake people up,’" according to the complaint.