I forget, was it Georgia that was judged to have unconstitutionally gerrymandered districts that they had to roll with anyway? Or was it one of the Carolinas? It's a little hard to keep all the ratfuckery straight.

Look, I know it's a shit no-effort meme joke, but I laughed: 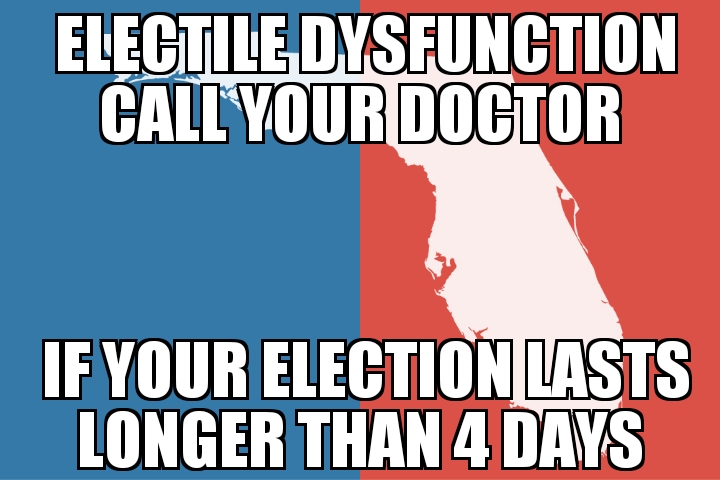 ATLANTA - Several people, including a state senator, have been arrested after a protest broke out inside the state Capitol Tuesday over this year’s election.

The General Assembly was in the middle of a special session called by the governor to approve federal funding for damage caused by Hurricane Michael when protesters started gathering in the Capitol rotunda.

Protesters started yelling, "No justice, no peace," and carried signs that said "count every vote."

"I'm being arrested because I refused to leave the floor of a body I serve in. I'm a state senator. I was not yelling. I was not chanting. I stood peacefully next to my constituents because they wanted their voices to be heard, and now I'm being arrested," Williams said.

In my head while reading that quote I was just thinking "90% she's black", then I clicked through and yup
Top

Bal wrote:In my head while reading that quote I was just thinking "90% she's black", then I clicked through and yup

AZ Secretary of State hasn't been officially called yet, but Hobbs is up by a significant enough margin that Ducey has called to congratulate her.

Say, Trump. You like doing the opposite of everything Obama did, right? Well, Obama gave a cabinet post to our Democratic governor when we had a Republican Sec State, and I hear you're looking for a new DHS secretary...

At any rate, I've never seen Democrats do this well in statewide elections. Senator, SoS, and Superintendent; they lost Governor, AG, and Mine Inspector; Corporation Commission was a wash (one Democrat, one Republican).

I think incumbency probably played a big role in the Governor and AG races (and, for that matter, the SoS and Superintendent races, where the incumbent in both cases was so unpopular that she lost her primary -- so even though the lame ducks weren't on the ballot in those races, it's not as if voters had forgotten about them). But from what I heard of the gubernatorial debates, Ducey just did a better job there than Garcia ("better" here meaning playing to the standard Republican talking points, "my opponent will raise your taxes and open the borders," and staying on-message, while doing a decent enough job playing defense on his weakness, education funding, to shore it up).
Top

I would just like to take a moment to say that Alexandria Ocasio-Cortez's bare-knuckled, two-fisted style of dealing with assholes is endearing me to her like few politicians in recent memory.

Incidentally, it's a better confirmation in my mind of real working-class street-fighter cred than any mere biographical boilerplate could do.

Lady's got a tongue as sharp as a Roosevelt's on her.

The fucked up thing is (I mean, aside from the obvious), now this validates the rationale for anti-ballot harvesting laws.

The vast majority of ballot "harvesters" are church groups who help ensure that lower-income, mostly-minority voters are able to get their ballots in. Accusations that this was being used for voter fraud were much the same as other accusations of voter fraud: an excuse to keep minorities from voting.

On top of everything else that's disgusting about this, it gives people something to point at and say that laws banning ballot-harvesting were right all along.

It's gotten downright cliche to point out that Republican accusations are always projection -- but damn it, it's true. The reason Republicans were so quick to point to ballot harvesting as a vector for voter fraud is that that's what they would do.
Top
Post Reply
113 posts