To be fair the original sale may have included patents or cash that were not sold this time around, but even so, that's essentially a nominal payment just to cover the transaction fees. Tumblr's being dropped like a hot rock.

The first thing you will find when you install the official Jeremy Renner app is a video which I would describe as essentially the Renner-fied version of the infamous Garth Brooks “first Facebook post.” Jeremy attempts to explain exactly what his app does, and in so doing delivers an excellent impression of someone who has never heard of either Jeremy Renner or apps. Also, maybe this was just on my device, but the video seemed to cut out before he held up today’s newspaper as proof of life. A potential bugfix in version 1.9441.2? I’m sure there’s already a Jira ticket being written up.

The second thing you will find upon installing the app—if you have not already installed the official Jeremy Renner app, please feel free to take this parenthetical as an opportunity to do so—is that every push notification you receive through the app looks as though it is coming directly from Mr. Renner himself; you will also soon notice that you receive a push notification every time somebody replies to you. What this means, as you’ve probably figured out by now, is that if you post “Lookin’ good, Mr. Renner!” under a blurry video of Jeremy driving a dump truck and someone named football_jersey97 replies with “There is diarrhea shooting out of my penis,” your phone will buzz and you will receive a notification with the words “Jeremy Renner: There is diarrhea shooting out of my penis” next to a little picture of Jeremy Renner’s face.

Now, I do not develop personalized vanity apps for celebrities. However, if I did develop personalized vanity apps for celebrities, I think one of the things I would try to avoid, just right off the bat before we got to much of the complicated stuff, would be any situation wherein it is extremely easy to make it look like the celebrity in question was personally messaging you about the stream of diarrhea shooting out of their penis.


Zuck gives an address at a private university retconning Facebook's original purpose from rating the attractiveness of female students to a platform designed to promote free speech and right the wrongs leading up to the Iraq war.


Every Single Comment on Facebook's livestream of Zuck's Free Speech address is fawning. 100%. There is not a single negative comment that appears.
How fleeting are all human passions compared with the massive continuity of ducks.
Top

The dumbest idea I ever had was that tech nerds rising to power through the internet would be overall good for society because they'd be introspective SF readers looking to move humanity in the direction of the Federation or Culture.

Nope lol. Turns out every one of these fuckers has the hots for Dagny and Ender.
Top

Make no mistake, none of these guys came up through engineering.

The issue is capitalism, not the current product. It's the equivalent of saying "the issue is we keep letting sociopaths make tools that hurt people for money. Instead let's give them new technology that not even governments know how to deal with and let the sociopaths with no drive but profit decide what to do with them! Problem solved!"

Brentai wrote:Make no mistake, none of these guys came up through engineering.

In Zuck's case in particular, it's a matter of public record (for which he had to pay a legal settlement) that he just stole the idea off of the two guys who did come up with it.

It's a matter of public record for Musk, Jobs, and Gates too.

I can't really say the same about Bezos, but Bezos in his life has never pretended to be anything but Lex Luthor, so he gets a... pass? I guess? On a certain level I can respect a suit being able to admit that he's a suit and he's okay with that. That respect only extends as far as his maintenance outlook, of course...

mharr wrote:The dumbest idea I ever had was that tech nerds rising to power through the internet would be overall good for society because they'd be introspective SF readers looking to move humanity in the direction of the Federation or Culture.

Nope lol. Turns out every one of these fuckers has the hots for Dagny and Ender.

There are a lot of SF stories you could compare our current predicament to. "Foundation, but Hari Seldon is a Nazi" is one of them.
Top

You'd think we'd have codified some version of Nobel's Law by now. "No matter what you build, somebody is going to try to use it to kill people."

Yeah, the tale of two Steves was another example that came immediately to mind.

"Foundation, but Hari Seldon is a Nazi" 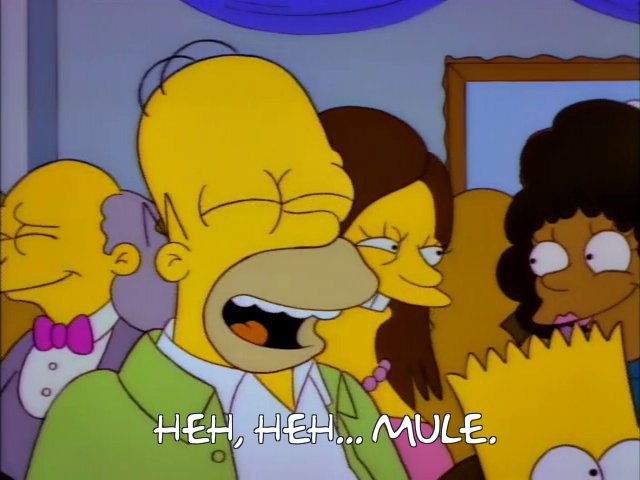 Better than waiting to see if someone builds the Allied Mastercomputer before or after the oceans catch fire.
Top

Fantastic, wonderful! Much better than Cats. I am going to use again and again.
Top

I don't trust Dorsey any farther than I can throw him, obviously, but this is potentially good news. This may come to nothing, but any step towards more open software and protocols is a step in the right direction.
Top

I can't help but see this as a direct result of losing a significant chunk of their Indian userbase to Mastodon after they voiced some concerns about casteism and abuse and Twitter naturally ignored them.
Top

Oh, sure. "Let someone else deal with this" is not only the lazy and obvious solution to abuse, it also happens to be the only one that actually (sort of) works.
Top
Post Reply
177 posts