It's almost a relief to be able to hate and dismiss them again. I was going to swallow the bile and nail their colours to the mast. Hahahanope.

Zara, that is the best one line description of UK politics logically possible.
Top

It's actually amazing how often Starscream is relevant.

Cartoon villains, as an overall archetype, were laid down by people who starved and suffered their way through the First Gilded Age, all the way into Cold War, an era encompassing The Depression and both World wars, to say nothing of any number lesser miserable events. Those artists and writers knew as much as anyone of their era that such assholes are very real.

For a while there, from the 80's onward, assholes got better press, be it professional PR (for the rich and white, this was a natural extension of things like the Southern Strategy), or the actual embrace of villainous values through Reagan-type Social Darwinist arguments, which as we know, became so pervasive that even the Left embraced them until recently (and many still do).

But assholes have stopped caring about pretending to not be assholes, so for some folks it's a brusque reminder that there's no shortage of actual humans (I use the term purely scientifically here...) every bit as bad (and ridiculous) as our Snidley Whiplashes and Starscreams.

Well, that's what I figure, anyway.

It's not that we don't expect people to be as malicious as Skeletor or worse, it's just that we expect real people to be a bit more complicated. But technology has made things easy enough that a completely two-dimensional, instinct driven homo erectus can buy a computer program that makes him seem like he has some sort deeper motivation or plan. It's the Xanatizer 5000.

I'm *this close* to a lengthy digression on Starscream's arc in Till All Are One, but I realize it's not strictly pertinent and that's not the Starscream we're talking about.

It may be interesting to observe, though, that '80s kids have grown up into fans who expect characters like Starscream and Megatron to be complex and multilayered, even as we see real-life villains become ever more cartoonish and two-dimensional.
Top

I was promised a real adulthood and if the world won't let me have one then I'm just going to have to create my own.

I have another metaphor 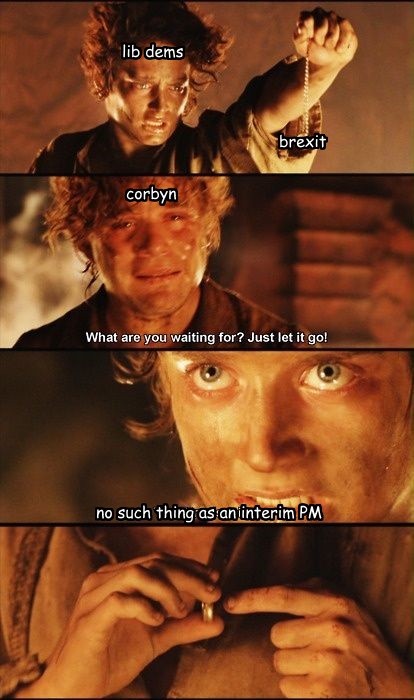 Globe: Leaked official documents confirm Britain to face food, fuel, and drug shortages in the event of a no-deal Brexit

I mean, this is sort of like the leaked information that proves the NRA literally hands out scripts to its spokespeople to read from after mass shootings

No duh, but I guess it's nice to have to shove in the face of fucking idiots

But they have to keep going now otherwise they'll look very embarrassed by it all for backing out.
Top

I remain hopeful that the world learns from a no-deal Brexit. This can include Britain too.

Basically, I want everyone to see what happens when you go full protectionist anti-refugee.

I feel bad about the people who will suffer, and the people who will die (and there will be people who die, as a direct result of medicine/food shortages) but the world really needs concrete, direct examples of why building a fucking wall around your nation and hanging a "keep out" sign is a bad idea.

This is why I'm actually against a deal-Brexit. I don't want it to look like doing this shit can work out. I either want them to stay in the EU and drop Brexit entirely, or crash as hard as possible.

Maybe that's wrong and a no-deal Brexit will only inspire other nations to do the same, regardless of how much damage it inflicts on the people of Britain. I really fucking hope not.

Stepping outside the world and viewing it dispassionately I agree, except I have several loved ones I cannot afford to rescue numbered among those who might die.
Top

Yeah, I'm aware it's an extremely cold take. For the record I vastly prefer a "actually nevermind, fuck Brexit entirely, stay in the EU" result.

I'm just really afraid of deal-Brexit sort of kind of working and then other dickheads pointing at it as an example of how actually being a isolationist nationalist country is fine.

But if somehow deal-Brexit results in less death and suffering but also serves as a warning, then okay.

Or, put another way, if there's any upside to no-deal Brexit, (and this would be the only possible upside) it's "maybe the world will learn something from it."

I mean, that may be too hopeful. Human beings, if nothing else, have historically proven that they don't learn jack shit from, well, anything. I should probably just hope for the least amount of death and misery right now.

Friday wrote:I mean, that may be too hopeful. Human beings, if nothing else, have historically proven that they don't learn jack shit from, well, anything.

We're still trying to figure out, less than a century later, if Nazis are bad. If 80-something years of books, movies, and Ken Burns multi-part documentaries on the subject haven't made that crystal clear to anyone with a pair of neurons to rub together, then... fuck, man, I don't know.

I've learned not to hope for the worst most destructive possible outcome thinking it'll be a hidden blessing, because as it turns out these things don't usually cause some cataclysmic event that everybody learns and rebuilds from, it just accelerates any existing decay and normalizes a new low for the human condition.

Yeah, you're probably right. I should reframe my hope to "if deal happens, then I hope people see the bad shit anyway."

In any case, it seems like any deal which would genuinely prevent potential disaster would have to functionally amount to "Remain in the EU", or at the very, very least "Remain in the Common Market".