Yeah, the assholes didn't even resign as cops, they just resigned from the ETF division.

I can tell there's a lot going on back there, but the end result is I now look extremely stupid for giving them any one of them the benefit of the doubt. Great work.

This thread does a good job of explaining complicity:

Brentai wrote:You think the point is academic but if you're ever going to pull in support from people who have, sometime in their lifetimes, ever had a positive interaction with a police officer, you need to make the distinction.

People who can see the protests and think "well they're not all bad" are too busy scissoring a fence to worry about courting. They'll be just as inactive when an actual civil war breaks out. People who might actually do something don't need to be told to worry about the complicit ones that just don't understand or choose not to act and go with it.

Historically, I don't think trying to make the message palatable to the white moderate has ever worked.

But even if there ever was a time where that would have been the right strategy, I think that time has passed.

Nearly three-fourths of Americans view the death of George Floyd at the hands of a white police officer as a sign of an underlying racial injustice problem, a new ABC News/Ipsos poll finds, a significant shift from a similar question asked just six years ago.

This poll shows a more than 30-point increase in the belief that recent events reflect a broader issue over racial injustice from an ABC News/Washington Post poll from December 2014, four months after the shooting of Michael Brown, an 18-year black man, by a white cop, and five months after the death of Eric Garner, a black man, who died after being put in a chokehold by a white officer. In the 2014 poll, 43% of Americans said those instances showed signs of a broader problem, while 51% called it an isolated incident.

In the new ABC News/Ipsos poll, which was conducted by Ipsos in partnership with ABC News using Ipsos’ Knowledge Panel, only 26% believe the incident is an isolated one.

And, at a time of deep strife and unrest, there is a rare show of uniformity across race and party about the treatment of African Americans by the police.

Majorities of whites (70%), blacks (94%), Hispanics (75%), Democrats (92%), Republicans (55%) and independents (71%) agree that what happened to Floyd exemplifies a systemic rift between law enforcement and black communities in the country.

Just one poll, for now, but it could be a real sign that opinion has finally shifted.

There may not be anybody left to convince. We may be at the point where everybody who can possibly be convinced that there's a fundamental problem of racism in American law enforcement has been.
Top

Yeah, but is everybody convinced that it's their fundamental problem?

Büge wrote:This thread does a good job of explaining complicity:

This is good, folks ^

This could go in so many threads 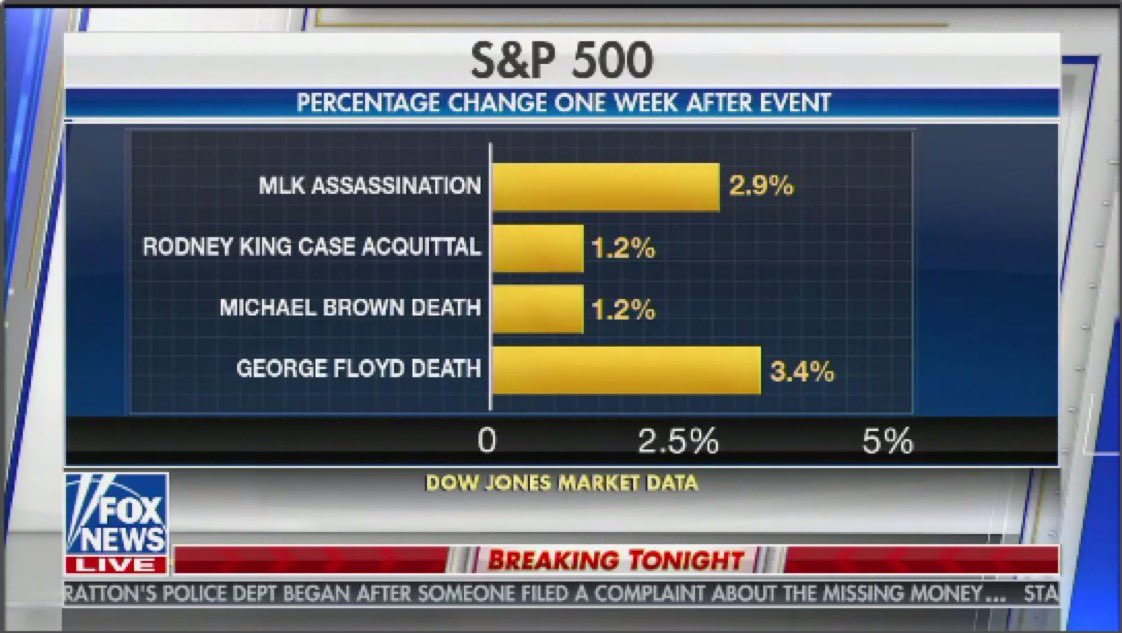 the insane, myopic focus America has on the stock market is probably the single strongest piece of evidence of hurrrrrr capitalism

I mean, other than all the death and misery and treating the working class like dirt and increasing the price of life saving medicines until people die of insulin rationing

I must make two honest confessions to you, my Christian and Jewish brothers. First, I must confess that over the past few years I have been gravely disappointed with the white moderate. I have almost reached the regrettable conclusion that the Negro's great stumbling block in his stride toward freedom is not the White Citizen's Counciler or the Ku Klux Klanner, but the white moderate, who is more devoted to "order" than to justice; who prefers a negative peace which is the absence of tension to a positive peace which is the presence of justice; who constantly says: "I agree with you in the goal you seek, but I cannot agree with your methods of direct action"; who paternalistically believes he can set the timetable for another man's freedom; who lives by a mythical concept of time and who constantly advises the Negro to wait for a "more convenient season." Shallow understanding from people of good will is more frustrating than absolute misunderstanding from people of ill will. Lukewarm acceptance is much more bewildering than outright rejection.

This quote gets posted every so often but I was reading Thad's link and it was in the letter, and I felt compelled to talk about it.

See, MLK gets quoted a lot, and a lot of the shit he said was important.

In my opinion, this quote is his most important quote. This shit? The "White Moderate" shit you see going on right now? I would prefer if they were just fucking openly goddamn Nazis almost. (Not really, but almost.) It's so fucking insane. So. Fucking. Insane.

I have just received a letter from a white brother in Texas. He writes: "All Christians know that the colored people will receive equal rights eventually, but it is possible that you are in too great a religious hurry. It has taken Christianity almost two thousand years to accomplish what it has. The teachings of Christ take time to come to earth." Such an attitude stems from a tragic misconception of time, from the strangely irrational notion that there is something in the very flow of time that will inevitably cure all ills. Actually, time itself is neutral; it can be used either destructively or constructively. More and more I feel that the people of ill will have used time much more effectively than have the people of good will. We will have to repent in this generation not merely for the hateful words and actions of the bad people but for the appalling silence of the good people.

None of that was directed at you. You said "the cops are complicit" and I agreed with you.

I'm talking about the people who are still doing the same song and dance that they were giving MLK. About how the protests are counter-productive and could you please just go kneel somewhere we can't see you and can ignore you.

"If only someone in a position of power would do something to redress these terrible problems..."

I mean, I don't pretend to know jack all about Canada or Canadian Politics, but isn't "looking pretty and paying lip service to the left while actually doing nothing" pretty much Justin's thing?

Sometimes he does things! Sometimes... I mean, at least he's moved the Overton Window, and even if he does nothing many of his statements can be actually used as a legal basis to take the government to task.

But yeah, he waffles a fuck of a lot. Way too much. Never mind the occasions where he's outright done nasty shit, like when the government kept fighting one of the main compensation awards for indigenous children. Fucking CHILDREN!

And using the government's own statements against it in court or in the media presumes the fucking government isn't doing what it's supposed to be doing in the first damn place.

It actually relates really strongly back to the issue of the white moderate. Trudeau's main bugaboo is that he's haunted by how hated his dad was, whereas his dad gave ZERO fucks. Justin wants to be everything to everyone, so he's basically the moderate incarnate. But his dad was a contemporary of MLK who coined the phrase "A Just society" as his goal. I know he had a lot of faults, but there's basically no other political leader I can think of who advocated for that, with socialism as a byproduct. Almost universally it's the other way around; socialists who speak about justice as a byproduct.

I think that actually informs a lot of my worldview in a way. See, Letter From a Birmingham Jail actually helped me to understand what that phrase really MEANT. It also helped me to understand that what people really want in a society more than "fairness" or "equality" is "justice" which looks like a fair and equal society at a glance, but is something fundamentally different.

A lot of people talk about making society more equal, but almost no one speaks of making it more Just. MLK's words about "a negative peace which is the absence of tension to a positive peace which is the presence of justice" is a phrase I think about a lot, like, it literally crosses my mind verbatim several times a week. No justice, no peace.

LOL TD Bank (Canada's second-largest bank, though they're now big in the north-east US too).

They're a presence in the entire US. Sad to say they're probably one of the least noxious financial institutions we've got.

Yeah, they're quite good for a bank.

I wasn't even commenting "LOL evil bank" or anything like that. I just thought it was funny that 2 Wall Street of all places was occupied by a Canadian bank of all things rather than some US or big international bank because I can't ever think of even nationally-dominant Canadian companies as anything other than small time internationally.

I've actually been with them for basically since I've had a bank account without any cause to change this. They've always been the ones to push the services/hours that Canadian banks offer. Like they destroyed the concept of "bankers hours" up here to the point where banks have the same hours as any retail outfit and everyone else followed suit.

What happened was they bought our largest credit union trust years ago and miraculously their culture infected the big dull bank, instead of the usual other way around. The ex-CEO even went on to be a (mildly) leftist technocrat nerd advisor to various federal and provincial Liberal governments.

On the other hand, if CIBC ever comes to the US, man, stay the fuck away

(Caveat: just imagine the phrase "for a bank" is appended to every relevant sentence in this post)


If these protests have done absolutely NOTHING else, it has made the cops the sworn enemies of an entire generation of journalists. And even without professional journalism, this is EVERYWHERE. If you motherfuckers wanted to hide, you done fucked up real good.