Welp, this is a blood bath. I absolutely love Legend of Mana, from the opening cinema down to the absolutely bizarre depths of its interlocking systems, the graphics, the music, even the simplified gameplay from the prior games. It's fucking awesome, and it's warring with Resident Evil 2 for a vote here. Symphony of the Night is a lock for all the reasons that Symphony of the Night should be. It's held up incredibly fucking well and solidified a style of platformer that we're now absolutely lousy with. It would be easy to wag the finger at SotN for the same reasons I did Super Metroid, but it's a little early for that. Likewise, Lunar is a lock for me. It's the JRPG of all JRPGs, with nary an original bone in its damn body, but it hit at exactly the right time in my life to have a grip on my heart. It also pioneered the insane collectors editions we have today, for better or for worse. Jumping Flash! and Threads of Fate are both great, great games that I really wouldn't want to see go out this early, they're just up against some stiff competition. Resident Evil 2 versus Legend of Mana, though. Resident Evil 2 is still easily my favorite game in the "original" series before 4, and slots right in behind 4 in my overall preference of the games. But I think at the end of the day, I'm just more of an insane, quirky, beautiful JRPG mark than I am a survival horror mark.

I never played Lunar, but I played the heck out of the Warlords easter egg on the bonus disk.
Top

Symphony because Symphony.
Resident Evil over Threads of Fate for being more iconic to the era.
Legend of Mana.
Top

I was on the Nintendo side of the console wars so... basically voting to try to eliminate things people like. Like Legend of Mana.
Top

You could also not vote.

But that's not community participation!

I'm okay with this as long as you know FFVIII and CC are the way to vote every time they come up.

Advancing: SotN, Check this out!, By the power of Althena!, Althena, lend me your power, RARRRRGH!, Lyrai
Lose: RE2, Jumping Flash!, Threads of Fate

Lunar 2, sadly, just isn't as interesting as its predecessor. Tenchu was a pretty damn interesting game, but was also kind of janky as fuck. Metal Slug X was pretty much the best port of a Metal Slug game we could get on the PSX, but .. eh. It was just a port, and there have been better and more comprehensive ports for that series.

Pocket Fighter is super fun for a casual throwdown, Bushido Blade literally has nothing else quite like it to this day, and Suikoden 2 is kind of a masterpiece despite localization issues. I don't feel super passionately about any of the six in this round right now, but we'll see how it goes further in the competition.

Owned and adored both Tenchu and Bushido Blade. God damn, what good games. Well, it was Bushido Blade 2. But I played Bushido Blade 1 at a friend's house and it was so cool. We would stand there with our sword tips crossed all silent and then like whoever made the first move i dunno it was supposed to be a showdown-type thing but we were kids and we'd figured out too many cheap ways to win after a while

Tenchu was the coolest fucking ninja game, it was just the ninja game, you're a god damn ninja and everybody talks like they're in a bad kung fu film and nothing makes sense and you eat buns all the time, make sure you know where the buns are cause you need yo meat buns, you're a growing ninja
the best kazz around
Top

Lunar already got it's rep, Metal Slug will get my vote if we ever do best arcade games, and I feel weird voting for a game I still don't know how to pronounce (I've been saying it like taking legal action against opiates) so the rest get my votes.

Having never played Pocket Fighter or Tenchu, I flipped a coin and it came up Tenchu.

Jeez, Friday, just ask me which one of my BELOVED CHILDREN will be RITUALLY SACRIFICED AT YOUR ALTAR, why don't you.

Most things that Suikoden does are done as well or better by Suiko2, except for the truly amazing way that Suikoden doesn't waste your time. Compared to modern-day games it's fast, compared to your average PS1 RPG slogfest it's incredible. No sitting through slow-as-molasses cutscenes, a dedicated menu option to just ignore low-level mooks that aren't worth the time to fight them, multiple characters attacking at once... it's the sort of game that's wonderful for what didn't get put into it.

Xenogears is obviously the total opposite here, but it's such a glorious trainwreck! I replayed it a few years ago and had actual fun with the battle mechanics, after skipping past all the Evangelion fanfic. Plus, you get to turn the tiny green-haired girl into a terrifying destroyer of worlds more powerful than the gods themselves, and play along with the minigame of "just how hard can we pretend that Blanka Rico isn't in this any longer".

Persona 2 has ACTUAL ADULTS (technically) as protagonists (some of them), which is such a breath of fresh air all by itself. Now I want a Persona 2 / Radiant Historia crossover. Dammit.

Front Mission 3 lets you spend more time aimlessly surfing the Internet than advancing the plot. Such realism! It also pulls one of my favorite tricks: Kazuki is the main character on paper, but Emma or Liu are really running the show, and Kazuki's such a dunce of a figurehead that they don't even need to be subtle about it. Goofy Sidekick Ryogo is way more aware of what's going on, as you can see from his succinct evaluation of every Squaresoft RPG protagonist from the 90s: 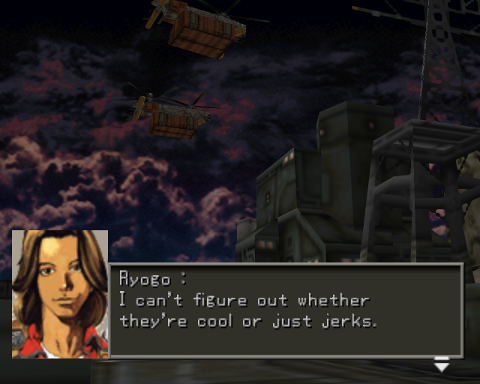 (Also, who keeps chaining ROF Up 1 and Zoom 1 together about five times in a row, reducing any target into a fine pile of metal shavings? Not Kazuki. Ryogo: the hero we always needed.)

Silent Hill is Silent Hill. That might be enough! Adventure games didn't die, they just leveled up into Silent Hill. (And then they died a few sequels later.)

Front Mission 3 is an awesome game with a god-awful plot.

Jeez, Friday, just ask me which one of my BELOVED CHILDREN will be RITUALLY SACRIFICED AT YOUR ALTAR, why don't you.

If it helps, the losers of this match aren't going to be actually eliminated.

FM3's plot is dumb and I'm not in love with the mechanics, but I'm a sucker for world-building and it really brings the pain on a plausible near-future where everything has somehow gotten much worse without really changing. I especially liked how they underscore the arbitrariness of war by casting you on the opposite side based on a throwaway decision at the start of the game.

Xenogears, maybe more than any other game I can think of, is noteworthy for how it compensates for its massive failings, and the promise of what could have been with infinite money. Lahan Village is the best attempt to date to get you invested in irrelevant NPCs in the first half-hour of a game. I actually sort of appreciate what Disc 2 was trying to do, too; it was always supposed to be a story game, so if huge amounts of the back half of the game had to be cut it makes sense to handwave some dungeons in order to tie the story up as best you can.