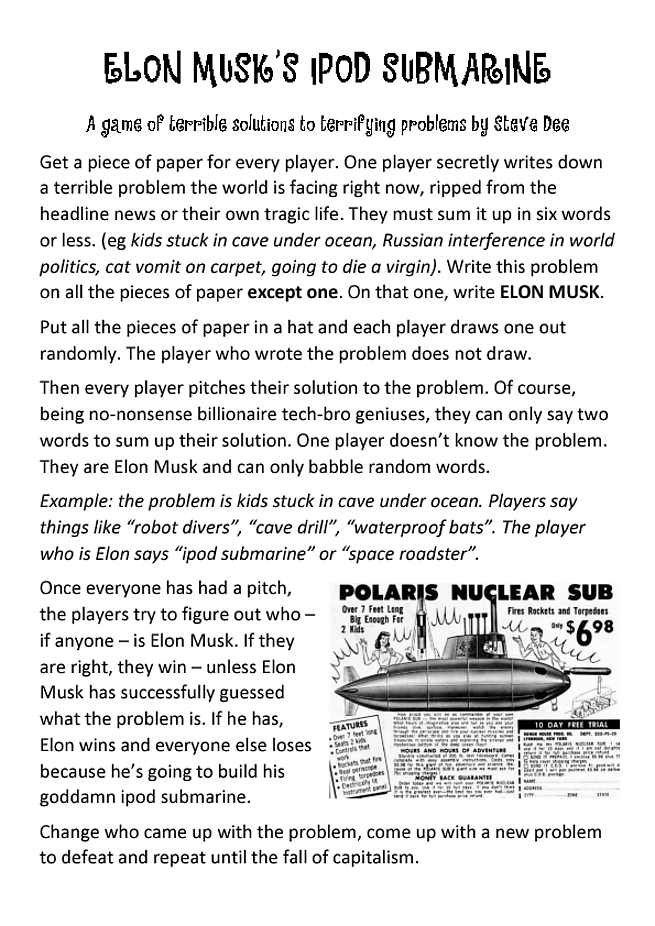 Additional/modified rules for running the game by forum:
1. To join in for a round just type /in in this thread
2. Whomever is writing the problem will be the mod for the round, I will start and it can rotate to whoever wants to run a round as we go along.
3. Round mod will randomly set player order and post in thread.
4. Round mod will come up with their problem, randomly decide who is ELON MUSK and send PMs to all other players (one "ELON MUSK", the rest the real question.
5. Starting with first player, players will post their solution (two words) in the thread. If timing is an issue because you're going to be busy, players can also PM their answer to the Round mod who will post it at the correct time.
6. Each round should last roughly 24 hours. Each round consists of pretty much reading a dozen words and sending one two-word PM, so it's not like this is especially heavy duty (that said, it's us, so if it goes a little over, eh, whatever).
7. After all solutions are public, each non-Musk submits a guess via PM to the Round mod as to who is Elon, while Elon submits a guess as to what the problem is.

End of round scoring:
- If Elon is right he wins the round and gets 2 points.
- If Elon is wrong, anyone who guessed him wins 1 point, 2 points if only one person guessed correctly.
- If Elon failed to guess the problem but no one guessed Elon, Elon wins 1 point.
- Additionally, 1 bonus point is awarded by the Round mod for the best (or most hilarious) actual solution. All players are free to speak up with an opinion about whose answer they thought was the best to try an influence the Round mod's decision. This is a small incentive to prevent non-Elon players from just throwing together two nonsense words barely related to the problem in order to cause others to think they're Elon.
- Points accrue over several rounds... we'll just keep going until everyone gets bored or drifts away, I guess. No one has to play every round either. You can sit out a round if you like. Points are more for keeping track than they are for any ultimate "win".

Notes:
- This is not Wolfgame/Mafia. Other than talking about who you like for the "bonus" point, arguments and cases should not be made in the thread, though ultimately the bonus point is awarded at the Round mod's discretion, (talking about a round after it's over or jokeposts about GUILD are just fine of course).
- Rounds need minimum 5 players to fire. I find 8 is an optimal maximum, but I doubt we'll have 8 every round.
- If you want to play but are not interested in modding that's fine, just say so. I don't mind playing mod more often.
- World problems should be weird/funny/whatever, but they should also be guessable. For example "a worldwide cheese shortage" would be fine "a worldwide brie shortage" wouldn't. Also, please don't accidentally add a secondary effect problem. For example "Anime is banned." is okay, but "Anime is banned, mass weeb suicides." is not.

top 10 reasons why Friday is playing in Mongrel's game

10. Guild
9. Envy was Batman
8. Classic was a vanilla villager
7. Of course Arc was the Flamethrower who was killing everyone
6. Brentai is a regular wolf
5. Kazz murdered the Hoobajoof, now apples are tall, 2x bonus roach time
4. Niku wins, everyone else loses
3. Zedpower can't be the Tiger, he bought the Lightsaber
2. Guild threw his dynamite at a flamethrower, day 1
1. I vote to test myself

I would say yes.

Anyway, this is more than enough for the game to fire, so I'll do some rolling, post the turn order and send out the PMs.

Turn order this round:

PM's also sent. Remember that posted solutions must be exactly two words and guessing does not take place until all solutions have been posted.

(Yes, I sent a seven-word PM. Pretty sure an extra preposition won't break the game).