Alright, let's take a look at our top 12 finalists.

God Hand is a dark horse that is honestly only here because I keep tiebreaking it to be here. But despite that it keeps consistently performing well enough for me to be able to DO that, so.

FFX is, despite its warts (and it has many) a classic Final Fantasy game, one with a very personal story and unique, fleshed out world. I don't begrudge it being here, despite it not being anywhere near my top FF or PS2 game.

Silent Hill 2 is a true masterpiece of game experience, and an entry you could proudly hold up when asked "are games art and if so why and show me some of them." It would actually probably be my pick to win the poll. (Not that I think it will, necessarily.)

Gitaroo Man is a music/rhythm game and one of the best of them. It's fun, it's silly, it's well designed. It deserves to be here just as much as any of the top 12.

Disgaea is like if FFT had Demon Lolis and exploding penguins. Sold!

I'm a little miffed Persona 3 FES is here instead of Persona 4, but it's a great game in its own right and some even prefer its darker tones to P4's extremely heavy emphasis on THE POWER OF FRIENDSHIP.

Katamari Damacy is a wonderful game with a wonderful new idea and wonderful execution. How could you not love it? It's my pick for "most likely to win", but we'll see when it goes up the heavier hitters.

Rez is another classic in that extremely popular music/rhythm genre. Not really much more to say.

MGS2 is here instead of 3, but that's pretty plainly due to the nature of an unseeded poll giving 3 a lot harder of a time. Anyway, we've got Raiden instead of Big Boss here in the final stretch, but that's ok, Raiden turned out to be a pretty cool guy once he got his own game.

Shadow of the Colossus is another "Silent Hill 2" when it comes to video game experiences/art. It's just as emotional and just as well-made. I personally have always preferred Ico to SotC, but there's no denying how well-regarded or well-designed SotC is.

Odin Sphere is another Dark Horse entry, and one that managed to get here with me constantly tie-breaking for it. Very impressive.

Graffiti Kingdom is here because Niku hacked the poll in order to have it beat Persona 4. I guess it's a pretty good game, whatever.

All in all, not a bad top 12. I'd say it's missing MGS3 and P4, but thems the breaks (at least in an unseeded poll). I would say it's also missing DQVIII, but I understand DQ is not for everyone, so that's not surprising. RE4 isn't here either and that's most likely because it's a multi-platform release and people are always going to argue over what platform it should be played on. Breath of Fire V isn't here because Paco was busy with real life.

We're gonna try a new thing, first of all I'll be making specific groups to vote on, and also, it'll be groups of three, vote 1, with only 1 victor. We'll go directly into the top 4 from here, and I'm going to force variety by grouping games into similar-ish types. Sort of. Kind of. You'll see.

Tidus, you've laughed your way to victory so far. But can you defeat a robot girl who wants you to put your DNA in her shiny core?

ffx is very charming and tells a pretty good story for an ff game. i liked the sphere grid.

i fucking love persona 3, but i've never loved it enough to actually finish it? maybe that will change someday. maybe i should go get my vita out right now.

all three of these are Extremely PS2 RPGs for better or for worse, and it's basically a coin flip between P3 and FFX for me, but I lean toward P3 just because I think its re-invention of the Persona series was a lot more impactful than FFX's latest changes to an ever changing franchise.

P3 gets a lot of points in my book for upending two RPG conventions: making the primary plot progression through time instead of through unlocking new territory, and for having a party that really doesn't like each other that much.* Indirect combat control of the other characters was plot-consistent: they're not taking orders from you, only tactical suggestions. The actual implementation of the mechanism wasn't 100%, but "neat idea imperfectly executed" describes pretty much all my favorite PS1/PS2/PSP games anyhow.

* Except Koromaru, who likes everyone.
Top

and for having a party that really doesn't like each other that much.*

and the shared bond everyone eventually develops feels really earned as part of what was probably the best "prelude to apocalypse" run-up I've ever seen in one of these games.

not too proud to say Koromaru Party broke me :(

Next up we have 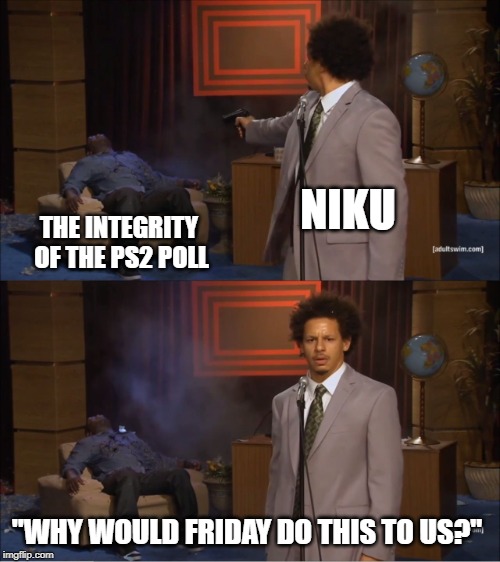 You're all worse than Daenerys.

Last in the round we've got:

THE DARK HORSES GET FUCKING ANNIHILATED BY KATAMARI DAMACY