Vinland Saga is pretty fun. I'm coming into it right after 500+ chapters of one of the most straight-forward, no fear of cliches stories I've ever read, but I think it's got some good jukes. Characters, the plot itself, nothing really resolves or develops as you might expect. Not that there's crazy twists all over the place, it's just that nothing is simple. There was a great bit with the classic "two strong veterans facing off in an indirect fight" where we see both their perspectives and they're both reading each other's moves, but their monologued internal explanation of their enemy's motivations are clearly incorrect and skewed by their own perspectives.

Then there's this great bit.

I just learned that FLCL had two sequel series made and the feeling it filled me with is, I imagine, close to what it would be like to hear a dead grandparent was still active around town.

Not having any idea whatsoever if they're good or terrible, I've been afraid to watch them.

Yeah, I went back in time in this thread after posting it and saw you brought it up two years ago. That adds a lot of worry that they produced two new series in as many years.

Still, while you did correctly report that the director is inexperienced and the writer is brand new to the series, they didn't just get The Pillows back but the original sound director as well, which is arguably the most important role. But not enough for me to open up that Schrodinger's box.

Hi Score Girl (available on Netflix) is actually pretty fucking good~! I clicked on it on a whim and was actually blown away by the quality. I watched all the episodes in two days.

The main character is a 6th grade boy who is growing up during the cabinet/fighting game boom in japan. It has a lot of really good and accurate game footage of Street Fighter 2 (the game most focused on) and a bunch of other shit, including Final Fight, Ghosts and Goblins, Samurai Showdown, Darkstalkers, etc. It also shows some of the early console stuff including more obscure consoles.

Anyway the story is about a mute girl who is pressured by her family to perform and never gets any free time, so she sneaks away to let off steam with video games. She meets and beats up the main character and they fall in love. There are a couple of time skips from grade school to middle school, then high school, to cover more games as they were coming out in the 90s.

It's harem trash with accurate video games. Mostly it's about the arcade culture in 90s japan and it's cool and funny and if you like harem trash and/or video games especially of that era then you're gonna like it. The actual voice actor of Guile stars as the MC's mentor.

The last like minute of this video is the channel's outro, but so was every version I could find.


That doesn't seem like the OP to a series that's about 25% fighting and 75% reflecting on the horrors caused by and / or apologizing for that fighting. Like, I even rewatched the Berserk OP, and that's a pretty mellow rock song and it's all imagery of Gatsu. It shows there'll be violence but focuses on it being a character story. Most of the violent moments in Vinland are certainly front-loaded, so it wouldn't be too hard to get an entire season out of just that, but it would make it weird. Guess I'll have to watch and see how it plays out.

Some minor spoilers I found funny with how they represented scenes:
the sad, super artistic shot of the family around a grave under the aurora is grieving a situation that lead to an incredibly minor character's death, which is not really how this looks (also the only one crying is crying over the loss of 4 sheep, not the death at all)
the cool-looking masked warrior flanked by advisers is kind of bridging two arcs of character development that don't overlap. Also the blonde bearded guy is a priest that was kept alive after a raid because they were impressed how much he can drink.

Wish it was big enough for a wallpaper. By some reddit dude. 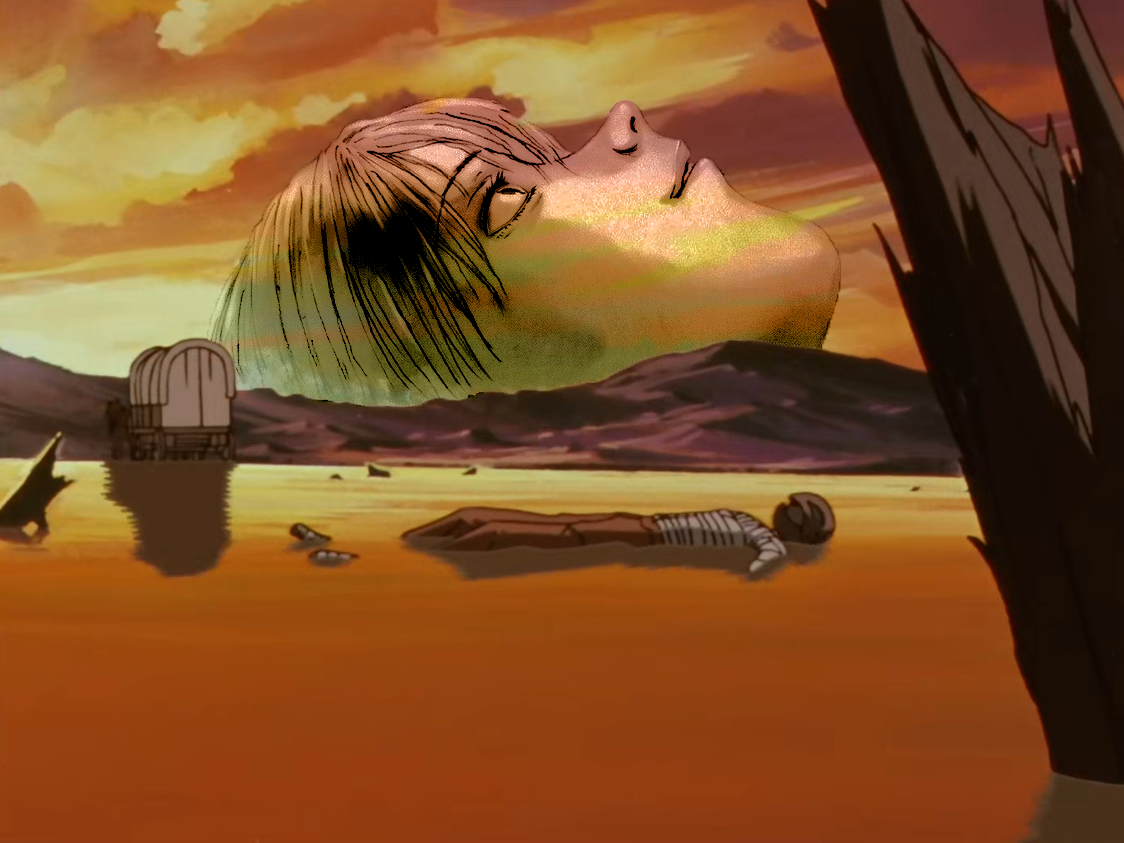 I'm even more surprised that it was the target of an arson attack given that their working conditions are comparatively good.

KyoAni has developed a reputation for high quality animation with a distinctive visual style, and it’s considered one of the more hospitable places to work in Japan’s famously high-pressure anime industry. Unlike most other studios, KyoAni hires animators as salaried employees who aren’t paid per frame.

Gutwrenching
How fleeting are all human passions compared with the massive continuity of ducks.
Top

Early descriptions of his ranting suggest it was a psychotic fan and not a disgruntled employee, so that's... better?

Brentai wrote:Early descriptions of his ranting suggest it was a psychotic fan and not a disgruntled employee, so that's... better?

Yeah, the reports all said it wasn't an employee right away, so that obviously the next guess even if it hadn't been confirmed yet.

I need a unicorn. Not a bisexual switch twenty-something, but a community that can evaluate anime / manga and videogames like stories or art and not like... dumb nerd shit. Not you dumb nerds. It's just there's not really enough of an active community here for fresh stuff, nevermind going back to evaluate one scene in a twenty-year-old story.

Anyway, I started the manga of Ichi The Killer last night and finished it this morning, and it's been a while since I saw the movie but I am confident I'm correct that the manga is just so much better and more brutal, specifically in deeper emotional and thematic ways and not just direct violence.

But anyway I tried to find ANY conversations about just the very last panel of the story, and the closest thing I could find to evaluating the ending was Jijii must have been the rape victim from Ichi's school! which like, if I did somehow miss that's where things were going, I REALLY missed it.

Anyway read Ichi then talk to me about it.

I'm sitting here eating lunch at a diner and I don't why I didn't notice at the time, or more importantly why I'm thinking of it now when I watched the show like 5 years ago, but one thing about Sword Art Online that's kind of neat is that - in sharp contrast to how TRAPPED IN THE TV/GAME/MOVIE genre stuff usually works - the principal characters think the game itself is total shit independent of their current situation. Kirito talks about how the PvP is hugely unfair, Azusa calls the crafting boring, etc. Maybe I should rewatch it with the understanding that the thesis is, "what if you were trapped in a video game, and the video game sucked?"

I don't have anywhere else to put this thought.

I was going to say "What if you were trapped in Cheetahmen?" before realizing that that's actually the plot of Cheetahmen.

Maybe I should rewatch it with the understanding that the thesis is, "what if you were trapped in a video game, and the video game sucked?"

This is part of the reason why I will actually defend episodes 1-14 of SAO, despite all the episodes beyond that devolving into boring shit harem shit.

I mean, it's bad enough that dying in the game kills you, but also the game sucks and isn't balanced. I remember thinking about that when they got to the 75th floor boss and it was literally one-shotting the dps. The only character who could take a hit from it was the fucking designer who had god mode on. And he didn't care because he was lost in his fantasy bullshit where he gets to play as the chosen hero, leader of the best guild on the server, friend to all, who eventually betrays the good guys and ends up as the final boss.

Can you imagine how many more people would have died to get out the intended way at floor 100? Fucking dude was putting them through a woodchipper. He's a massive fucking sociopath.

The initial SAO is really a fucking nightmare scenario.

Also, the Moonlit Black Cats episode is a pretty succinct explanation of why MMOs ruin friendships. Obviously the life-or-death stakes are front and center, but the recurring social theme of my experiences in FFXI has been meeting nice people who can't help me in any way at all. That's pretty hard on everybody!

Started watching the Fruits Basket remake, which is I shit you not a near one-to-one duplicate of the original series. I don't know which one I like more yet. Original had some more charm but a real low budget. Voice actors are the same as before, and are wonderful in the dub.

Still makes me cry though! So, it's the same as ever. I am an absolute sucker for this sappy show and I don't know why every episode always gets me, but it does.
tumblr | twitter | wingnut circus | youtube

why oh why did I sleep on FMA: Brotherhood for so long? This rules.

-Ling fighting for control over Greed by actually being greedier

pacobird wrote:why oh why did I sleep on FMA: Brotherhood for so long?

Because Vic Mignogna is a kiddy fiddler

That's why subs are better than dubs anyway. Unless the japanese lady who actually wrote the manga demanded he be in the english dub or else she wouldn't write the manga.
Top
Post Reply
494 posts