I was joking around with a friend earlier that the only reason they made the blood red was so they could do this scene and the resulting having Aoi walking around in the bare minimum of clothing after.

This was no accident.

Started reading Inuyashiki when news of an upcoming anime adaptation brought it to my attention.

It's by Hiroya Oku, the guy who made Gantz, and is very clearly a story written immediately after as you can see where he's learned to develop the more philosophical side of the story to something that (fingers crossed) may not end up being complete garbage by the end. He's also very clearly bitter about some of that fan reception. 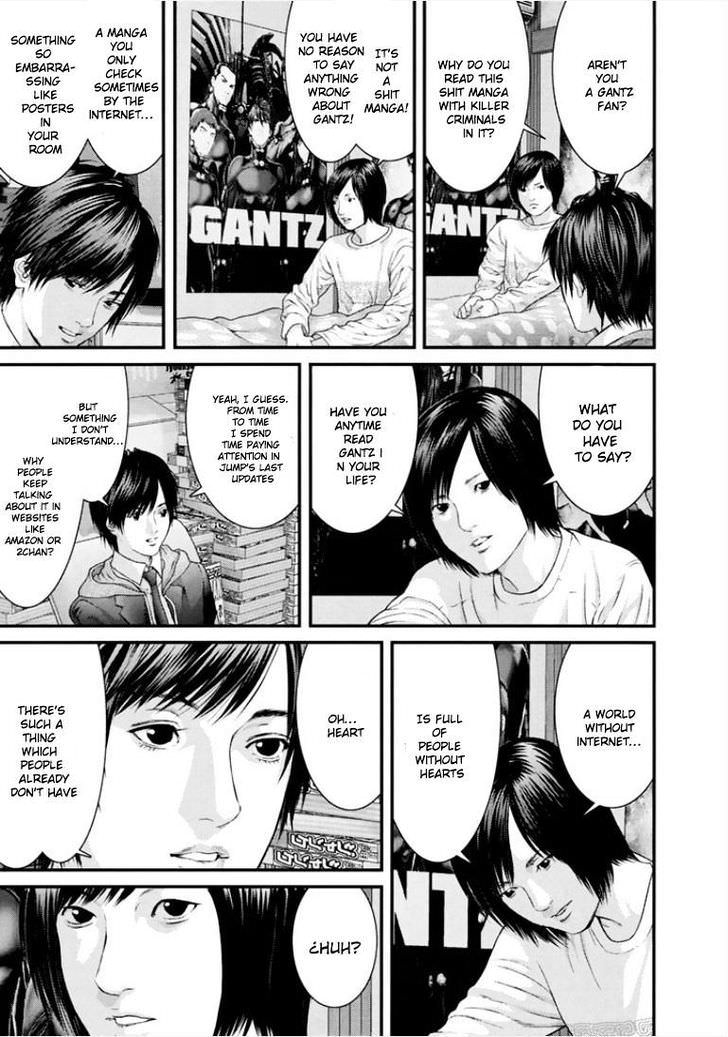 Anyway it's about two people that basically get gantzed but not quite and use the resulting powers way differently. Even though it is pretty directly slapping you in the face with them, there are a lot of very well done parallels to illustrate that the characters may not necessarily be good and evil. It's also really fun in a dumb way a lot of the time. 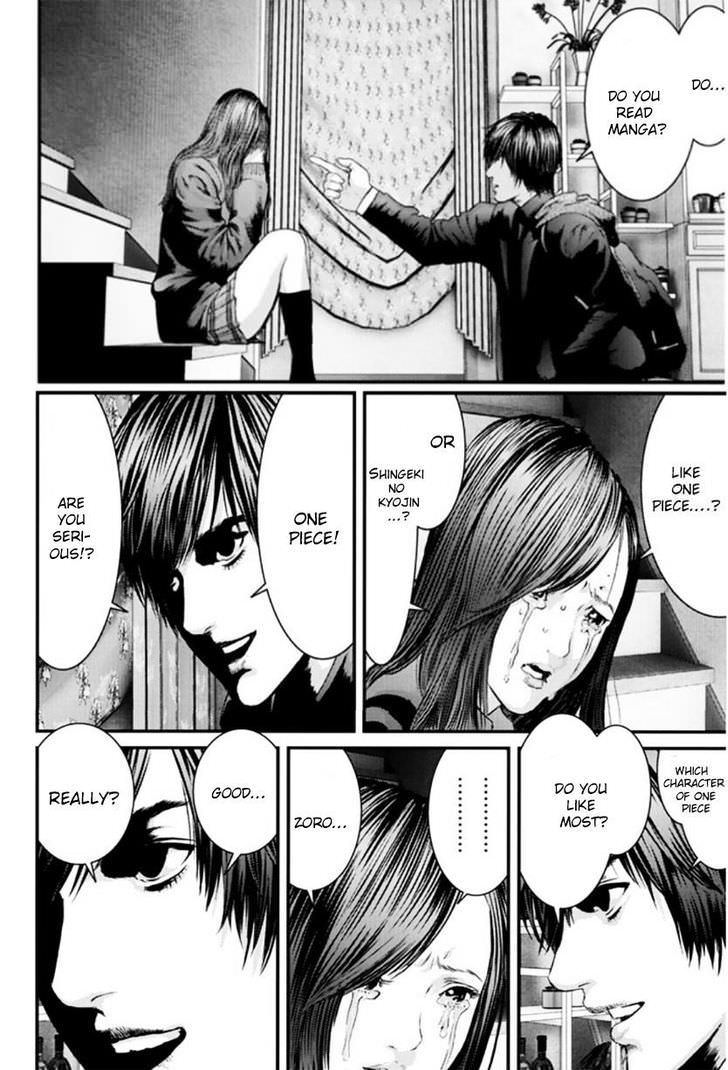 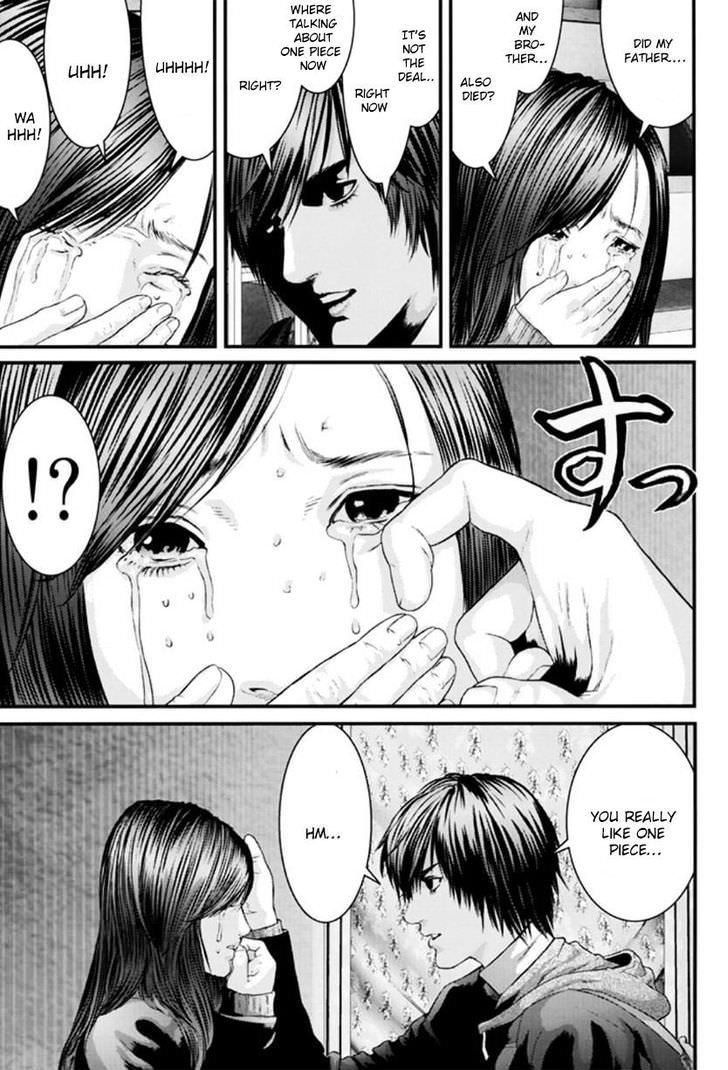 Fun fact: I did not check the translations on the site I ripped these pages from and I legitimately can't decide if these are worse or better than the official English.

Well now I want to see how bad the official translation is.
Top

TA wrote:Net-juu no Susume, or Recovery of an MMO Junkie, is pretty fun and cute so far.

Went to watch it.

Whether Yaginuma perceives his comments as discriminatory or not, they have had a chilling effect on Jewish fans of his work, including Anime News Network senior reviewer Rebecca Silverman. Silverman was a fan of Recovery of an MMO Junkie, even placing it in her top five anime of 2017.

"I feel sick that I named it one of my best shows of the year, and I wish I could take it back," Silverman said. " I know that there are some people who would say that it would be overreacting, because it takes more people than a director to make a show successful, but I can't stomach praising the work of someone who would deny or praise what was done to my culture."

Yeah, the article Lyrai links says there's some waffling about whether or not Yaginuma just doesn't understand English very well or the significance of what he's saying, but then they went and checked his Japanese tweets and statements and yes, he understands perfectly well.

I thought the studio had divested itself from the director at this point, but I haven't been paying that much attention to the story after the news originally broke. I don't know if that makes anything better or not, but hey at least the manga still exists.
Top

The article is from february and it does have the links to the follow up stories about it, the gist being that they did divest from the dude.
Top

Holy shit you guys, the last five or so chapters of Attack on Titan have basically been good enough to make up for all the boring bullshit in the middle.

Attack on Titan is over, there's nothing to care about anymore.

So I hearrrrrrrrrrrrd that near the end of Attack on Titan, it's revealed that the race of people that can turn into titans had like holocaust-jew armbands and were subjugated by the nazis because of their super dangerous power. Then they overthrew the nazis and imprisioned them on the island on which the show takes place. So like, the nazis are the heroes here?? And the jews are a legitimate horrible world-conquering threat to humanity that should've been stopped by the nazis back when they had the chance??

Anyways in other news, I hear there's a new Full Metal Panic, so I'll be all over that shit. Hopefully it's more Fumoffu than Second Raid.
tumblr | twitter | wingnut circus | youtube

* May not actually be surprising.

I don't know if it's changed a bit for the show, and honestly revelations get phoned in often enough that it may not even still be true in the manga, but basically The choice was to be wiped out or hold up on the island. The actual "founding titan" royal family passes on the titan power every generation and the new inheritor gets to decide if they want to use the power to start a new war, but have thus far been kept docile by inherited memories of war.

But that total batshit part is even weirder because yes, on the mainland they force all Eldans (the race that can become titans) to wear armbands and live in ghettos and the secret police are terrible to all of them. But also all the titans that attack the walled city are from those ghettos because the basic punishment for eldans is to be brought to the island and abandoned for some reason. That's only after using a special medicine that turns them into brainless titans, because even though the unique titans that all change back-and-forth from people to titans and have special powers on top of that are inherited, for some reason there's also a man-made serum that can make only people from this one race into mindless titans permanently? And the ruling powers apparently have a whole production system just so they can torture the world's most oppressed people?

Basically, yes, the the author wrote his creepy WW2 imperial fetishism into the narrative hardcore. It's Not Good.

Look, I don't think AoT is the most spectacularly written (or drawn) story, but that article is only barely above "Zootopia is racist because groups with a history of violent dominance makes me think of black people".

Yes, the direct imagery of these ghettos and the oppressed people are clearly drawing lines to the Jews during WWII. Yes, the entire world already has very Germanic themes which makes that first thing even worse. But outside of that, most of the legitimately comparable implications get thrown out the window pretty quickly, and there's at least a decent attempt at making it a story of war and tragedy, where there really still is almost no romanticism (except that two of the most loved characters are super cool stoic killers).

There has been speculation on the possibility of antisemitism in AOT for quite a while.

Okay at this point this is more a defense of story telling than anything else.

Büge's article feels more journalistic, but I'm not seeing a connection to the post that links it. That's a well presented and responsibly, if not officially, cited (from the story and life) article about how the mangaka seems to be heavily influenced by questionable imperial sources. Then it goes on to talk about how AoT's story is incredibly anti-imperialist and anti-war. It doesn't mention jewish people or antisemitism at all.

That actually kind of helps my point. The imperialism and oppression we see as a western audience has clear links to the German occupation of Europe (look I don't know my terms super good) and to eastern audiences it has clear links to the Japanese occupation of Korea. The actual connections are surface deep, with some names and imagery, and as someone who reads the story, and understands storytelling to a basic degree, that means he's doing a good job of presenting an emotionally charged experience.

Don't get me wrong, if he does have a secret twitter full of hate speech he's an asshole, and if the story actually starts presenting its themes with a worrying bias it seems to want the reader to agree with, it'll be shitty. But as it is, it seems like an artist that was inspired by history writing a story that reminds people of history, so pretty much just doing a good job.

I mean, I'll say this - it sounds convoluted as shit, as is the anime way, enough so that it's not really a clear "jews are the bad guys" thing.

So it looks like the Eldans are the heroes, actually, right? Since they got conquered on the mainland by the nazish Marley Empire, who then sealed up the on the island and were forced to fight members of their own race from the mainland (in mindless titan form)?

No getting around all the Nazi imagery, through. The guy clearly loves that nazi aesthetic, enough so that he created his entire manga universe around it.
tumblr | twitter | wingnut circus | youtube

Yeah, Wehraboos have been a thing in Japan for ages now.

In most cases it's idiots who mistakenly think the Nazis were the most capable army relative to their enemies in world history and just got outnumbered (wrrrrroonnnnngggggg), who love the aesthetic (that Hugo Boss, man... who can resist?), who think of the fact that they were allies and identify with common cultural traits like obsession with quality, or who just plain don't understand any of the racial and social conflicts.

In the past, this tended to mostly create obsessive model-makers who built nothing but Panzers and Tiger tanks. But some certainly do go on to be actual fans of Nazi ideology. More worrying, it seems like this contingent is growing as WWII becomes ever more distant and the re-militarization movement swells in Japan.