Destynova wrote:Anyone aquainted with the virtual idol group Hololive? Well get your ass over to TvTropes to learn more. In the meantime, here is a cute anime dog girl playing Doom 2016

Oh, some of us know ALL too well:
Top

I figured vtubers was a trendy thing, since I've seen a few here and there playing DOOG and Tetris. Didn't realize they were all one company's work.
Top

For any Seattle area residents that miss their commute, the regional transit agency has you covered: silent cab-view video of the light rail line, end to end.

It's weirdly enjoyable as a background distraction.
Top

when does the chemical brothers song start?

It's interesting how full train ride videos have become a minor popular thing. I think it started a couple years back with some of the more interesting/adventuresome/famous routes, but I think a ton of rail lines now have end-to-end, 1:1 time-scale cab video.

Not something I'd watch myself, but I can see how just tossing that on might be relaxing for some folks, and course there's always train nerds.

I AM HERE REQUESTING MORE INFO ABOUT CANADIAN CULTURE

So in regards to the Newfie joke, is that a thing? I was under the impression that Newfies stereotype/rep was that they were super nice/kind, not dumb. Or is it both?

It's both. Newfie jokes usually play off more of a bumpkin sort of dumb than just outright stupid. Though I gotta say, hearing a Newfie joke sounds like a bizarre relic of a long-gone time, like if you heard another American making Jens Jensen jokes about Swedish immigrants or something.

Like, I heard them when I was a kid, and they'd been around forever, but I never hear them anymore and haven't for years. They've died down to pretty much just "that old guy at the office ALL of whose jokes are horrifically dated, no matter whether they're offensive or not".

Though maybe that's not true in Alberta or the other prairie provinces, where you still see a lot of Newfies going for work.

That some of those are considered only Canadian baffles me, like kerfuffle, gong show, or deke. Really? Those are ours? 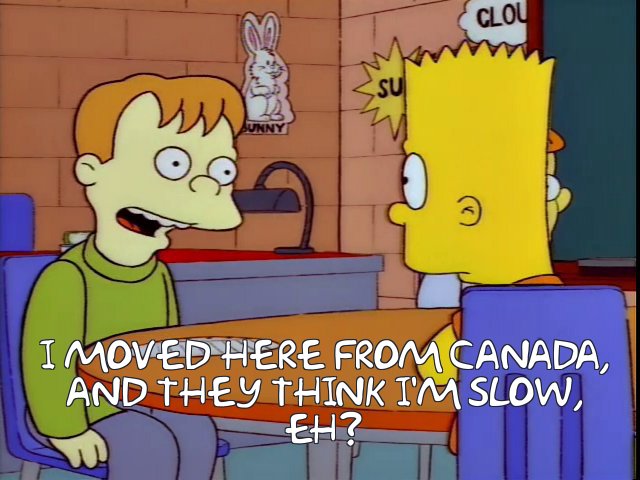