Companions will now cost 3 to put into your hand from your sideboard, and that ability may only be played as a sorcery.

Imagine WotC printing a card that was so horrifically overpowered that they, instead of banning it, increased the mana cost by 3.

That is how fucking badly they fucked up.

Now imagine a dozen of them in the same set!

My favorite story about mana costs is Rancor, which was sent to the people that print as either 1G or 2G (R&D couldn't decide which was better) but somehow got read as G and printed as such.

Which turned out to a great thing, because Rancor rules.

Mongrel wrote:Now imagine a dozen of them in the same set!

I mean, from a cursory overview it only seems like two of them are sufficiently powerful to require this? Most of them (not Keruga or Lutri) saw fringe tournament play, but only Lurrus and Yorion have broad impact on every format.
Top

The Dog-Cat card is already great (FUCK THE HATERS), but the fact that this is a combo is just plain MAGNIFICENT. 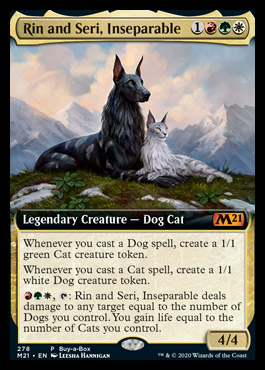 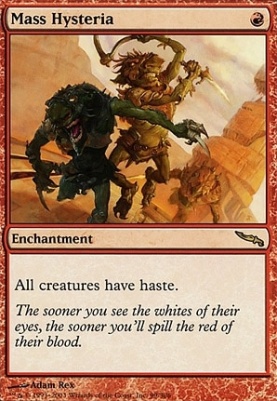 I don't think this was a huge faux pas and certainly we know it was done innocently enough, but this is such perfect Clueless MaRo.

I mean the ultimate goal is a world where people don't have to think that way any more.

Also, god dammit Mongrel for the post above that.
Top

Also, WotC finally took down the Gatherer entry for Invoke Prejudice (black KKK robes art, multiverse ID 1488, drawn by old-school neonazi Harold McNeil), as well as a bunch of other potentially-racially-insensitive cards (that are old and irrelevant in every format) like Crusade and Jihad and Cleanse
Top

I mean, it took a former editor of CFB and Magic event coverage provider posting a google doc laying out a whole lot of evidence of WOTC's discriminatory practices in hiring staff, connecting with artists, the way they monitor content creators' work, and interacting with contributors in general, to do that.

Striking those cards from the database is... well... it's not so much a start, as it is...

Let me put it this way: say the state of Magic is a messy room. This is WOTC turning on the light.

I mean, I'd say that Zaim Beg turned on the light, and Wizards has now pushed just enough mess around to have a place to sit down and survey the rest of the mess? Like, it's a good thing, but waaaaaaaaaaaaaay little/late.
Top

Is a joke where a daughter complains her mom is racist and dated in her views now racist? Legit question, not sarcasm. I guess the implication that "This card you might play yourself is a racist creature" is problematic, and invalidates/goes against what's actually quite good, inclusive flavour text on the original card itself. So in this specific situation it's clearly bad.

All other problems aside, I'm not sure how I feel about removing cards from Gatherer, because, uh, those cards still exist and are legal for play in the formats where they're legal for play (including digital ones). They're not a monument you can tear down and throw in the river, so NOT having them in Gatherer sends what message exactly?

EDIT: Oh, they are banning them!

Today, we will be changing the multiverse ID and removing the Gatherer card image for the card Invoke Prejudice, originally printed in 1994. The card is racist and made even worse by the multiverse ID it was unfortunately codified with years ago. There's no place for racism in our game, nor anywhere else.

But to that point, it should never have been published nor placed in the Gatherer. And for that we are sorry. The events of the past weeks and the ongoing conversation about how we can better support people of color have caused us to examine ourselves, our actions, and our inactions. We appreciate everyone helping us to recognize when we fall short. We should have been better, we can be better, and we will be better.

To that end, we will also be removing a number of other images from our database, including:

"We have removed this card image from our database due to its racist depiction, text, or combination thereof. Racism in any form is unacceptable and has no place in our games, nor anywhere else."

Additionally, these cards will be banned in all sanctioned tournament play.

There's much more work to be done as we continue to make our games, communities, and company more inclusive. Know that we work every day to be better and that we hear you. We look forward to sharing more of our plans with you as our games and organization evolve.

Okay, that's consistent at least. And the gatherer entry still technically exists, so they're not pretending they were never made. Seems fine.

I'll probably regret learning the answer, but what horrible bit of history did Stone-Throwing Devils link up with?
Top

mharr wrote:I'll probably regret learning the answer, but what horrible bit of history did Stone-Throwing Devils link up with?

Muslims throw pebbles at a pillar representing the Devil as part of the Hajj (pilgrimage). The card is basically saying the Muslims ARE the devils.

Also, I'm not sure, but I believe that exact term has been used as a mocking slur toward Muslims in the middle east, particularly among Israeli settlers against Palestinians. That's an old memory from a discussion of the card from like 20 years ago though, so that might not be accurate.

mharr wrote:I'll probably regret learning the answer, but what horrible bit of history did Stone-Throwing Devils link up with?

It's an offensive nickname for Muslims:

This whole twitter thread goes into detail about what the reasoning behind each card's ban was.

Edit: Ah. Mongrel beat me to it. Still, the thread's a worthwhile read.

n.b. that Twitter thread is an external source's explanations for possible reasons, not WotC's reasons.

Hopefully future generations will look back on this era and understand that going full Dickwolf is step one on an unremittingly stupid road to civil war.
Top

Grath wrote:n.b. that Twitter thread is an external source's explanations for possible reasons, not WotC's reasons.

Welp. So much for what might've been an interesting format.

mharr wrote:Hopefully future generations will look back on this era and understand that going full Dickwolf is step one on an unremittingly stupid road to civil war.

I think that's the idea.