Soooo I ended up buying it full price. I'm out of games and MAN did I want to play this.

I'm about halfway, and so far, I like it a lot. It is at least as good as VC1. Slow start, but it really picks up at the 1/3 mark and goes strong for a good long while. I like some of the dramatic decisions they've made.

Where I am in the story right now, it's slowed down and is kinda dragging a bit. A lot of "we're stuck here, have to escape" or "we have to survive this weather" segments.

Missions have been enjoyably challenging. Still bugs me how bad the AI is in this game, since they're constantly run in front of tanks until dead. Makes it so all you need to do is park your tank in the right spot and wipe out half their force as it tries to approach.

Anyways, I'm very impressed by the soundtrack. Hitoshi Sakimoto did it for VC4 as well as VC1 (and Vagrant Story, FF12, FF Tactics), and it really is above and beyond the call of duty for a title like this:

Can definitely hear the FF Tactics in this one:

They DO play a few tracks way, way too often, which annoying. Whenever your turn is over and the enemy turn begins, it starts the same song again, so, you get sick of that fast. Same with the "things are dismal and depressing" song, which I'm getting over and over at this point in the game.
tumblr | twitter | wingnut circus | youtube

I suppose I should finish 2 sometime. I did pay for it.
Top

I like it OK. A Persona story in the VC universe.

Way too repetitive, though.

Maybe I'll get around to 4 eventually. It's got Denuvo, though, right?
Top

Thad wrote:It's got Denuvo, though, right?

That's why I haven't bought it yet.

Okay I'm in the final few missions. I'll say that the mid-game drags in a way I don't love. I also have not enjoyed fighting most of the "boss" characters in this game.

That said, I still adore this cast of characters. It constantly reminds me why I like this series, and fairly often the actual missions will validate my love for this series by letting me create three or so teams of two and execute multiple objectives at once. Can't get enough of these characters working together to accomplish objectives on the battlefield. The way the characters color the gameplay parts is wonderful, and I only wish there was more interweaving/boosting/co-operative powers available.

Anyways, IMPORTANT NOTE ON VANCEY THE DRUNK: Turns out the only way to get her Squad Story is to first unlock "Gertrude", a hidden hoity-toity nobility character that will only join once you have 1,000,000 gp in the bank. So yeah, you have to fucking grind skirmish missions or whatever till you get her, which blows. I ended up just repeating the final skirmish 5 times, since that one can be won in a single turn.

Once you get Gertrude, the Squad Story with her, Vancey, and that random darcsen kid who idolizes Raz is unlocked, and you finally get to change Vancey's turn-ending "Hammered" trigger into a "Former Elite", which buffs fucking everything and turns her into the battlefield goddess she deserves to be. 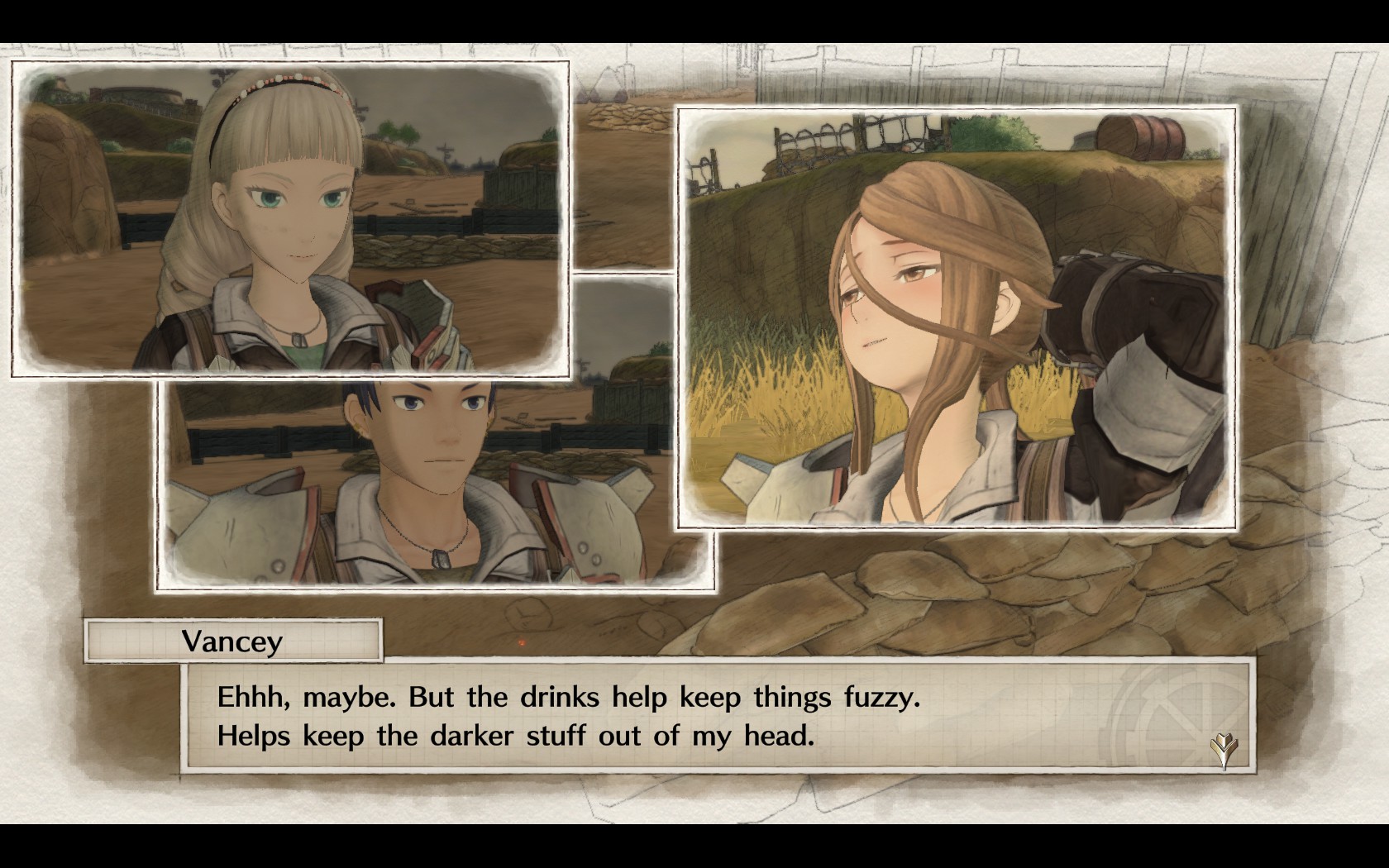 I also love Gertrude, so, I'm ready to complete the final mission now. 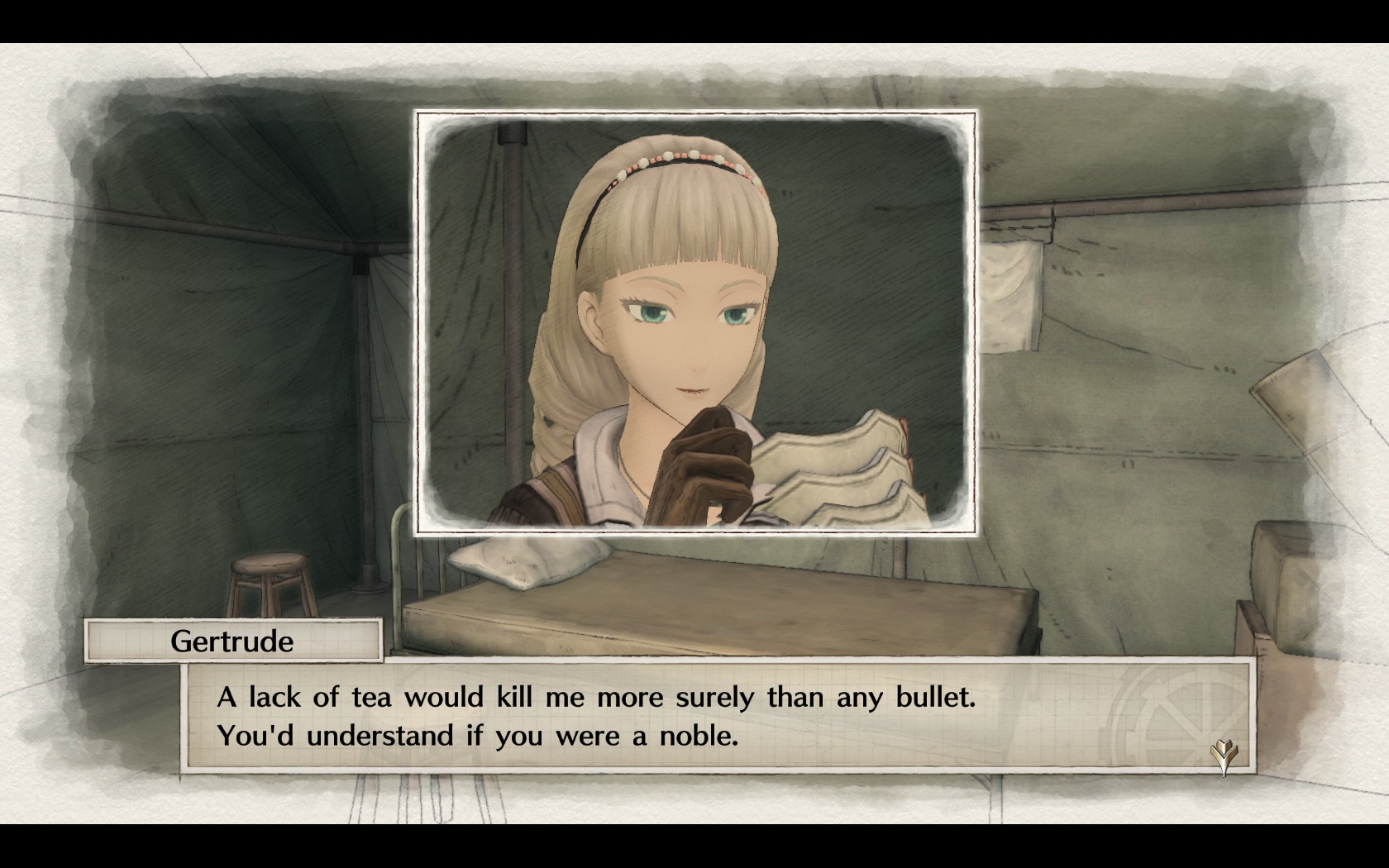 Spoiler for the endgame, so I'm going to spoiler tag out this whole part:

There is an absolutely wild story element they introduce where your secret superweapon boat actual contains a ragnite atomic bomb, called the A2 bomb, which you're determined to detonate in the Imperial capital, killing "millions." This is framed as this wholly just act that is the "only way," which is mind-blowing to see in a Japanese game about anime WW2.

Almost positive they're not actually going to detonate it, because it's also revealed that the A2 bomb is an Akira-like little girl, but like, just the entire idea seems buck wild.
tumblr | twitter | wingnut circus | youtube