I would say the really important links beyond the ones mentioned (and party members, obviously) are Sun (for lots of money and otherwise easier negotiations), Star (for party-swapping and easy escapes when ambushed), Moon (for keeping all party members leveled), and Strength (to break the fusion level cap).

I'm nearing the end (I assume?) but it looks like a missed out on maxing one of the evening confidants since they dont' seem to be available anymore. TOO SAD, especially since it looks like I'll max everyone else.
Top

That kind of stuff really chaps my ass. To this day I never picked up FFX-2 again when I got to the final chapter and activated every sidequest but one thanks to missing an optional dialogue prompt or something in the penultimate chapter.

Earlier, I mentioned that missing the SINGLE dialogue prompt on one day for the Death link was what finally broke me when playing P3. I just stopped once I realized.

Cleared the game. 66% trophies first go. Not planning on NG+. I just don't have the time and I already got all the important things, the confidant plots, done anyway.

After sleeping on it... I really, really liked this one. The core theme of rebellion was unpacked in very interesting ways, and as everyone who ever saw a trailer for this game stated, it has style for days that counts for so much. Using the death and recasting of a voice actor to smokescreen plot swerves was great too, though in retrospect I feel stupid for not being more disturbed by how the Velvet Room appears.

There's a lot to mull about mechanically too I think; If we take the writing and put it to the side, how exactly did they keep a turn based JRPG feeling so *fresh* to me beginning to end? Obviously the presentation and quality of life features that speed up combat enormously helps, but that only goes so far. I think part of it may be how social links impact gameplay in such a huge way. Going through Star and Tower especially left me giggling when I unlocked new perks with just how *crazy* new options in combat they give can be.

fuck you you can't make me choose

and so i didn't

Turning down Empress was brutal.... loved it. Fortune is my favorite that I didn't pick. Priestess was my pick, but her confidant story was only OK.
Top

Priestess is good if only because I imagine it makes the interrogation worlds more awkward.

"I wanted her code name to be Rider."
Top

You know those items from vending machines that decrease attributes in exchange for something else? Use those liberally. Use them on a party member you don't use much (Star-Swap them in) or who you're not sure will stick around for long. Just use one, guard until Futaba mentions the status ailment (I think she has ~2 lines for each per person?) repeat.
Top 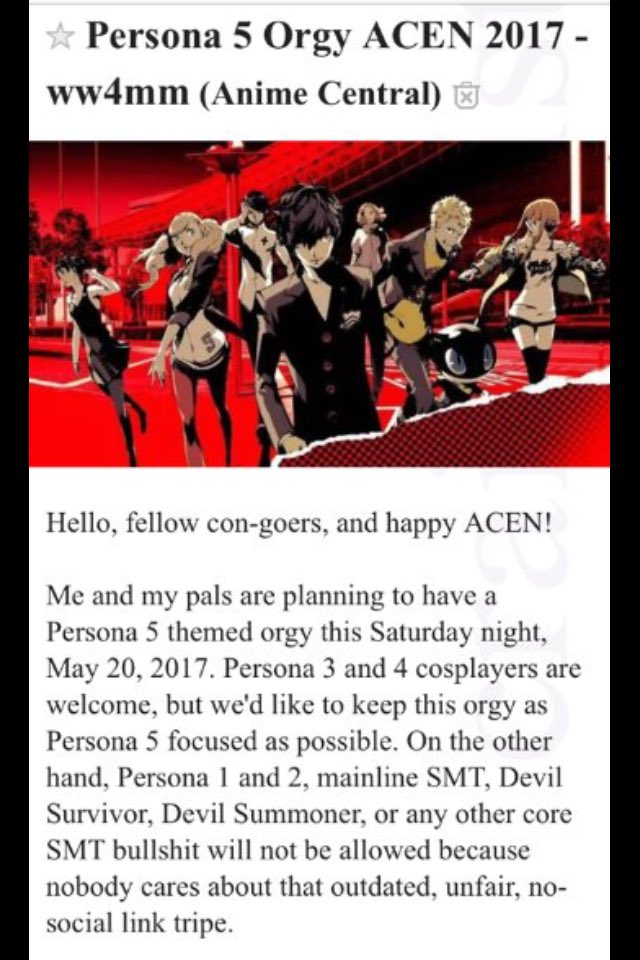 : I sacrificed my world so yours could continue to exist. I saved ALL of your ungrateful butts. And now I get to wreck them.
Top

I've been trying my god damnedest to bring back Serendipity for an entire week now and the game refuses to let me go to the DVD store. It's like 5 days overdue now. I almost got there today but Morgana scolded me for not pawning that counterfeit olympic medal to the arms dealer ASAP, so I figured I had to do that first, but then the arms dealer made me hold a fucking loaded .45 in a paper bag so the cops wouldn't find it on him, which meant I had to go straight home again!
tumblr | twitter | wingnut circus | youtube

luckily as someone who also got dvd-fucked, i can tell you on good authority that the first time you have a late rental they will just make you promise to NEVER DO IT AGAIN with no charge

Okay you know what??? I'm just going to keep the fucking DVD, fuck it. Fuck this.

Well at first I was all about the Panther, but she got old fast once the game made me feel bad about Makoto getting in trouble. Then there's the punk doctor and the shogi player. I think I like the shogi girl, which I'll call shogirl, but I'm not sure. Then there's maid mom teacher. Futaba is a little grill, let's not touch that and Haru has stupid hair. Sae's shadow looks like a Kim Possible villain, so I don't know what to think about that. But just to be a contrarian I will say Ms. Usami because even though she looks angery she seems like a pretty chill woman so maybe I got a chance with her.

I just (spoilers for late game) stole Shido's treasure (btw: expect me to misspell Japanese names) and now I'm waiting but where does the game go from here? I mean, a bigger threat would be something like a devil showing up and causing chaos or maybe taking down something bigger than a Japanese politician, like the American president? The Pope? I liked how grounded the non-metaverse stories have been so far and might be disappointed for the game to go all weird all of a sudden. I expect Akechi to still be alive, but that would be too obvious. I can't imagine anything the game can do now to not be stupid, but I have come this far and I cant stop. Hopefully the game wont end with me putting Jesus in the electric chair so I can get the holy grail so I can teach Satan how to use a circumcision attack, which is the only thing stopping God (showing up as a giant naked woman) from stealing the youth of Japan's future. Oh shit I'm going to hell now just because I played Religious Pokemon.

PS: I've delivered all my dvds late and never had to pay extra, not that it matters because I'm now swimming in money thanks to spending too much time in Mentos, the freshmaker.
Top
Post Reply
162 posts