HOW WAS YOUR DAY

I don't know memes, but that is a good birb.
Top

My heat went out some time yesterday. It was 65 f when I went to bed, this morning it is about 56 f after running a space heater in my bedroom all night. It was a low of 7 f and a high of 16 f outside. They're coming to fix it and no pipes burst, so not a post for shit days. But I'm still really cold.
Top

There's an alleyway graffiti war going on in our neighbourhood currently. Since we're in Greektown, it's being carried out entirely in Greek, to the point where they're only using blue and white as colours.

For some reason this amuses me entirely too much.

The business end of the dog is making sounds that would prompt you to grab a bugout bag and flee the state if coming from the local chemical plant. If I never post again you know the general shape of why.
Top

A friend was using Google translate and came across this gem: https://www.google.com/search?q=vis+a+vis

The gem is when you ask it to translate French to English.
Top

Mongrel wrote:A friend was using Google translate and came across this gem: https://www.google.com/search?q=vis+a+vis

Google search results are customized per user, and i'm not seeing what you're seeing.
Top

Mongrel wrote:A friend was using Google translate and came across this gem: https://www.google.com/search?q=vis+a+vis

Google search results are customized per user, and i'm not seeing what you're seeing. 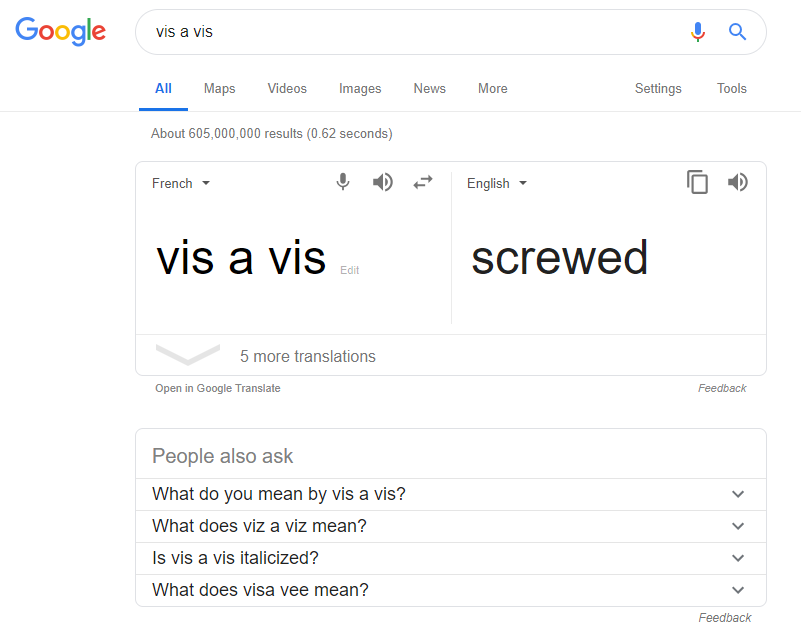 I went to the store and there was a tiny 8 week old puppy and I got to cuddle it for like 20 minutes. It was so sleepy and cuddly and fluffy. ;__; He booped me with his tiny nose.

Oh yeah and the day began with someone walking into my office and bringing me a mimosa and ended with an opera. Good day, this one.
Top

What is best in life? To cuddle your puppies, see them scamper before you, and to hear the opera while drinking a mimosa.

Shut off water. Discover I have failed to put washer in piece that connects to toilet. Attempt to remove.

This is harder than it sounds. There are three components -- connection to pipe, connection to toilet, and connection to hose that connects to bidet --, and getting one of them to turn while the other two remain stationary is extremely difficult.

Get some rubber gloves so I can grip more effectively.

Eventually manage to dislodge connector from toilet. Insert washer. Reconnect. This is much harder than it sounds. The first time, I connected the bidet to the toilet and then the pipe to the bidet. But I can't disconnect the pipe fixture now; it's on too tight and I can't remove it.

Eventually I work out a system where I screw to the right, then hold the connection stationary while I move the middle piece back to the left, then repeat until it's as tight as I can get it with a gloved hand.

This process goes on for awhile, culminating in my getting a pair of pliers. I can't tighten the connection any more than it already is, and in fact when I try to tigthen it more I actually rotate the piece inside the toilet tank that it's connected to, which causes it to loosen and the little bit of water at the bottom of the tank starts leaking out.

Eventually I get it to stop leaking but by this point my fingertips are raw, my side hurts, and I decide that I am clearly in over my head and need to get somebody who is actually competent to come in and fix this tomorrow.

Fortunately, we have two bathrooms.

I explain all this, in abbreviated form, to my wife when she gets home.

We return. She says "I have to go to the bathroom."

When you have one working toilet, sometimes you need to be more specific than "I have to go to the bathroom." In this instance, if she had, for example, said "I am going to hire a team of Sherpas, set up base camp, and expect to return after snowmelt," I could have said, "Hey, can you let me use the bathroom first if you're going to be in there awhile?" But that is not what she said.

So I unload the groceries. And she is still in the bathroom.

I put the groceries away. And she is still in the bathroom.

I start preparing a flatbread pizza. I preheat the oven, go outside and pick some rosemary, cut up a couple of tomatoes and green onions, and lay out a piece of flatbread, and she is still in the bathroom.

I go out back and piss on a tree.

I come back in and the flatbread is on the floor. A piece of it is missing, in a shape suspiciously similar to a dog's jawline.

I decide you know what, fine, we have more flatbread; I am not going to try and salvage the flatbread that the dog chewed on and then left on the floor. At least I hadn't put any sauce, cheese, or toppings on it yet. Dog can have remainder of piece she took. I tear it into pieces, put them in her dish, and sternly tell her "This is not a reward for your behavior." This feels satisfying even though dog does not understand any of those words.

Get second piece of flatbread; make pizza. It comes out pretty well actually.

Wife and I watch True Stories, which I bought back in November but haven't had a chance to sit down and watch yet. (Saw it once about 15 years ago.) It is a delightful film. Here is the music video for Wild Wild Life.

As I was loading that video, my computer locked up and I had to do a hard reset. (I have some weird intermittent problems with watching videos on YouTube. I'm thinking I'll do a rebuild and ditch OpenSUSE in favor of Antergos, which I'm running in the living room and has worked pretty well for me, but I'm waiting until the next generation of AMD graphics cards come out first. Navi, I think?) But miraculously, this post survived!

* There is a kind of tape you're supposed to wrap around plumbing fixtures before you connect them to prevent leakage. This was not mentioned in the bidet manual but would have been good to know!

* Maybe I should stop trying to fix things myself. I'm barely competent to build a computer (the USB3 slots on my chassis do not work because I managed to pull the wires out of the connector), my experiences with soldering have mostly served to prove that I am not good at soldering, my phone reception is spotty ever since I opened it up to try and fix the power button and knocked the antenna loose (and still wound up having to pay someone else to fix the power button), and now it turns out I am not competent to perform even the most basic plumbing installations. Maybe this is a time in my life where I should accept that I am not very good with my hands and let other people take care of these things for me.

* True Stories is a delightful movie, David Byrne's brain is a wonderful place to spend ninety minutes, and it serves as a good reminder that this shit is small potatoes and I am still capable of joy.
Top

Yeah, we had a toilet break in our house a couple years ago. At the time I was working at The Home Depot (only a true veteran of the orange apron knows to include the article) and I had assembled more than a couple of display toilets, so I figured this would be a breeze for me. Somehow despite watching an instructional video before beginning the process, I STILL managed to omit the plumber's tape during the process. It's now my first purchase any time we move.
tiny text
Top

Thad wrote:The wonderful thing about working above a TV station is that you never know what you're going to see when you come in. Oh, hello, alligator!

Today it is some sort of tiny ungulate. Possibly a pudu, or a baby antelope. I thought it was a puppy at first.
Top

I tear it into pieces, put them in her dish, and sternly tell her "This is not a reward for your behavior." This feels satisfying even though dog does not understand any of those words.

I'm flashing back to Guild and Guild Hall

(and then later it just turned into "private board" anyway)

"Guild, *what did you do* while I was away pissing in the backyard because I am bad at plumbing?" seems like a pretty rich metaphor to mine.
Top

Yeesh. Mongrel, atog and I have a toilet that leaks every time you flush it.

Me too, but I didn't when I woke up yesterday.
Top
Post Reply
713 posts