A place for my stuff

A place for my stuff

Now that I've got a plethora of flash carts and modded consoles, I don't need most of my older-gen games to be out and accessible anymore. I don't want to get rid of them (sentimental attachment/some of them are worth pretty good money and likely to continue to appreciate) but I'm ready to put them in boxes and tuck them away somewhere.

NES, SNES, Genesis, and N64 games are close enough to the same dimensions as standard DVD cases (length and width; not depth, obviously) that I should be able to use DVD storage boxes for those. Plus all the games that are on DVD (or aren't, but use DVD-style cases, like GameCube). But what kind of box?

Simplest solution: plain cardboard media box. I think BCW is the same company that makes the comic book boxes I buy, so I e-mailed my local comic shop owner to ask if he can order those and what they'd cost buying from him. Downside: they're not exactly pleasing to the eye.

Next step up: a photo box, something like this: 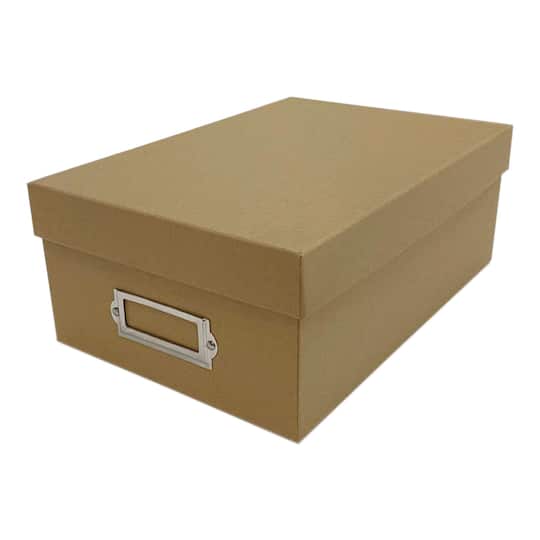 Looks a little more appealing; the problem is that they're not designed specifically for DVDs and I have to find one in the right dimensions, which turns out to be harder than it sounds. (I've got a bunch of them that are VHS-sized, which are a little wider than I'd like for DVDs and games.) It would be a lot easier if I could just walk into a store and look around, but alas.

A step up from that is the Snap-n-Store, but it costs significantly more than a photo box and I don't feel like the metal bits are worth the markup.

I like the look of the transparent plastic Really Useful Box, but for some damn reason the 22-liter box only appears to be available in the UK. The 26-liter looks like it might work, but if my millimeter-to-inch conversion is right it's about a quarter-inch wider than the 22-liter version, and also it doesn't seem to be available for sale anywhere except the Really Useful Box website, where shipping doubles the price of the thing.

Anyway. Anybody have any bright ideas or suggestions? How do you store your old games?

And then once I've got all this figured out, then I guess I get to figure out the CD and portable games.
Top

My games are currently: DVD boxes stacked in an old cube-shelving unit, cartridges in box-drawers in said shelving, CD cases in a box under my bed.

However I found this: https://www.containerstore.com/s/iris-m ... d=10009241 which probably isn't as nice as a Really Useful Box but might do the trick?
Top

I use some IKEA boxes that are the perfect depth for IKEA bookshelves – which seem to have been discontinued, or at least I can't find their like on the website now. Now I'm going to have the same problem you are! The CD size boxes were ideal for GBA/DS/3DS cases, too.
Top

Got ahold of some more of those 5x7 photo boxes; they'll do for now.

And this is just the apotheosis of First World Problems, but man, nothing like spending weeks trying to figure out where all my SNES boxes are stored, finally finding them, and then discovering none of them have the manuals with them and now I'm going to have to figure out where the hell those are.
Top

Not sure how long it'd take but I could escrow some Useful Boxes and mail them on from Scotland.
Top

Appreciate the offer. The overseas shipping costs are probably too much to be worth it, but I'll keep it in mind.
Top

On a related topic: inventory.

I've been using Comic Collector for my comic book inventory for years. I don't like it very much -- images don't work in Wine, so it's one of the reasons I have to keep a Windows laptop around; there are gaps in its listings (the farther back and the farther outside the Big Two you go, the likelier a book is to be missing, but there have been times it doesn't have a particular variant cover on a recent comic or some shit like that); some of its entries are inaccurate (it insists that iZombie is called "I, Zombie", and muddles up things like Archie's original 4-issue Sonic the Hedgehog miniseries and the main series); and the interface is just clunky -- but it's the only program I've found where I can scan the barcode on a comic and (most of the time) the comic will come right up.

There are some open-source collection inventory programs, but they just don't work as well; GCstar doesn't support barcodes at all and Tellico will only take ISBN numbers (so collections sold in bookstores might work, but the barcode pattern used on monthly comics doesn't).

So, that in mind, I tried the free trial version of Game Collector, by the same company as Comic Collector, because I wanted to have a more complete inventory of what games I have and what's in the boxes (manual, map, customer information packet, Nintendo Power ad, dust cover, etc., just in case I want a complete listing of everything that's in every box without having to actually open them up). IME it does not work very well!

The most baffling thing is that I tried scanning a couple SNES games' barcodes, and it told me the game wasn't found but pulled up its cover art. Like, I have no idea what's even going on there; clearly there's a hit for the barcode, clearly it's a correct hit, but...somehow the cover art is matched to the barcode but not the game's title or any other metadata? Shit's weird.

So I can add games by typing in the titles; I get a weird error message but they do get added to the collection. Though by the point I'm adding a game by typing its title, I'm getting no benefit at all from the barcode scanner, so I may as well be using one of those other programs, that are free and run on Linux.

If you're scraping games, Tellico won't let you search for a barcode but GCstar will. The downside is that it doesn't work very well. I found that barcode searches produced completely wrong results when using GameSpot as a scraper (multiple games listed, but none of them are the right game, or even the right platform), and while they worked for scraping Amazon, Amazon didn't have all the metadata (such as release date) and filled the "description" field with whatever description somebody hocking a used copy of LttP put in their listing.

So barcode searches are pretty much a bust, so I may as well just type full titles. Which, y'know, not really a big deal; I don't have nearly as many games as I do comics, and the ones I'm currently working on boxing up (NES/SNES/N64) are a relatively small subset of that collection anyhow. But I still haven't decided whether I'd rather use Tellico or GCstar or just a damn text file.

I've been thinking for years that I really should look into writing my own scraper for GCstar or Tellico and see if I can make them actually work competently for the kind of scraping and inventory management I need. One of the problems is that it's hard to find an online DB that's thorough, accurate, and scraper-friendly (not just "can be scraped" but "management is okay with scrapers and won't break them").
Top

...I wonder what the hell happened to my copy of Mega Man Soccer.

Though I can understand why I never noticed it was missing.
Top

My CBG said his distributor doesn't carry those BCW DVD storage boxes, so I ordered one online. I'll see if I like it and if I do maybe I'll grab a bundle on eBay. (There's a guy selling 10 for $100, which looks like probably the best deal I can get, but I'm not going to spend that upfront before I at least try one out.)

It occurred to me that hey, I've got hard drives attached to both my Wii and my PS2 at this point; there's really no reason I shouldn't just rip my PS2/Wii/GC collection and stash the discs away somewhere. Already did it with my Wii U, PSP, [strike]and PSTV[/strike]. Not sure if I'm ready to take the time to softmod my 2DS yet, but probably worth thinking about. Maybe look into doing it for the 360, too. (Probably not the PS4 or Switch while they're still receiving regular firmware updates; I'll just have to keep the media for those handy for now.)

(ETA I was misremembering about the PSTV. I have a flash card for it but I've never actually set it up. Only have three games for it anyway so it's not like they're taking up a ton of space even though I have them on physical media. I'd still like to get it working at some point. Maybe if I ever get back to P4G I'll try playing the hack that's got the English text with the Japanese voices.)

I've got most of my NES, SNES, and N64 collection boxed back up with box protectors. Want to get started on the Game Boy games but retroprotection.com and videogameboxprotectors.com are both out. I e-mailed both sites and they're expecting a shipment soon, so fingers crossed on that.

Then I'll have to figure out a place to *put* the GB boxes, since I'm back to "find a box that's the right width" problem.

(ETA2 Oh yeah Game Boy boxes are probably close enough to CD jewel case dimensions that I can use something designed for those.)
Top

The BCW box is a little wider than I'd like for NES/SNES/Genesis games. It's about right for standard-size DVD cases, and snug for oversized boxes (DQ8, Last Story). SegaCD jewel cases don't quite fit but that's okay because I only have 4 of those anyway.

I probably don't need to order 10 of them, but their advantage over the 5x7 photo boxes I've been using for NES/SNES games is that they're a little bit taller, so that if I were to stack multiple boxes, the storage box would be holding all the weight. The 5x7 photo boxes aren't quite as tall as the NES/SNES boxes, so if I were to stack them, it would be the game boxes holding the weight. So I'll think about it; maybe the BCW boxes are the way to go even if they're a little too wide.
Top
Post Reply
10 posts • Page 1 of 1