"Bernie Humanizes Citizens of Other Countries, And Why That Should Terrify You!"

The last tweet in the thread also appears to imply the NYT thinks the Soviet Union is still a thing that exists today?

The 500 million dollars things is so weird to me, because you don't even need to know math? And yet it's a super common mistake that people make over and over.

If anyone's curious, if you redistributed *ALL* of Bloomberg's personal wealth it would give every citizen of the US approximately $175.

Which is still like... imagine he cut everyone in the US a cheque for $100? He'd probably still lose, because, well, he's Michael Bloomberg, but it would be funny if someone actually tried that tactic.

Friday wrote:The 500 million dollars things is so weird to me, because you don't even need to know math?

It runs deeper than abstract math, I've known people that honestly believed they'd get fat if you cut their pizza into too many slices.
Top

The Globe's got a "Cases" "Recoveries" and "Deaths" ticker on their front page now and I'm not entirely sure how I feel about that.

Covid-19 has upended things so badly that the Globe has gone so low as to publish a Maggie Wente column. Truly, the worst timeline.

WaPo going all out with some incredibly irresponsible horseshit misinformation here.

When historians tally up the many missteps policymakers have made in the response to the coronavirus pandemic, the senseless and unscientific push for the general public not to wear masks should be near the top.

The evidence not only fails to support their stance but definitively contradicts it. It can take a while for official recommendations to catch up with current scientific thinking. In this case, such delays might be deadly and economically disastrous. It’s time to make masks a key part of our fight to contain, then defeat this pandemic. Masks that are effective at “flattening the curve” can be made at home with nothing more than a T-shirt and a pair of scissors. We should all start wearing these simple, homemade masks whenever we’re in out in public.

At the height of the HIV crisis, authorities did not tell people to avoid condoms. As fatalities from car crashes mounted, no one recommended avoiding seat belts. Yet in the face of a global respiratory pandemic, people who should know better are encouraging Americans to avoid using respiratory protection.

Like... holy fuck. NO. NO NO NO. The point is to conserve masks for health care workers because there's not enough for everyone.

If we had unlimited amounts, sure people could jam them on their faces all day to reassure themselves, since that's all they'd do given that most people I've seen with masks usually wear them in a way that renders them completely ineffectual anyway (hey, I'm no expert but I'm pretty sure they have to cover your nose, and pulling them aside to vape for a couple minutes isn't going to help either).

Jeremy Howard is a distinguished research scientist at the University of San Francisco, founding researcher at fast.ai and a member of the World Economic Forum's Global AI Council.

This guy knows literally nothing about the way N95 masks work (important: cheap ones are basically useless if they get damp, so the worst ones are only good for a couple hours).

And hey, neither do I, but mercifully I know quite a few people who do. Ones with actual medical or pharmacological training, not fucking Rando McTechbro here.

Thanks to that article, I'm already having arguments with normally-intelligent people who are pointing to experts at "smartairfilters.com" because they found a Cambridge engineering paper (with no medically-qualified people involved at all) online, rather than the surgeon-generals and CDC-equivalents of virtually every affected nation and every medical professional I've spoken to or read.

the amount of misinformation is fucking amazing honestly

but yeah fuck you wapo

The NYT, WaPo, and MSNBC all reported on Tara Reade last night. You know, now that the primary is over and all. 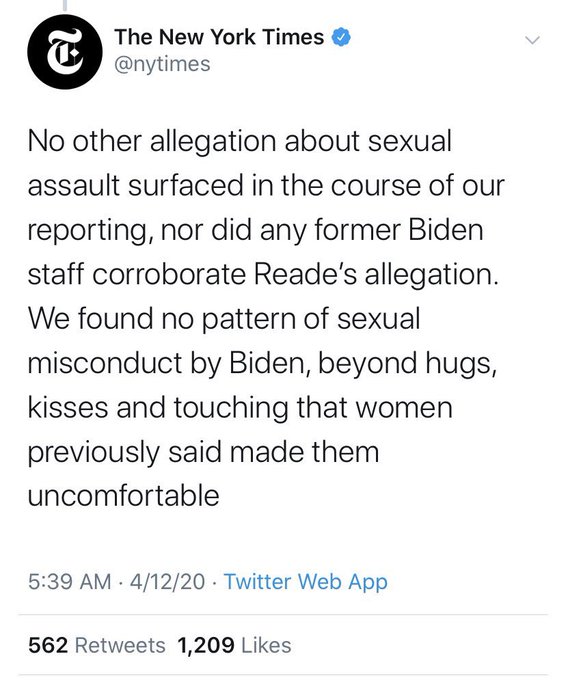 My client has committed no rapes whatsoever, with the exception of the times when he put his penis inside some women despite their objections. 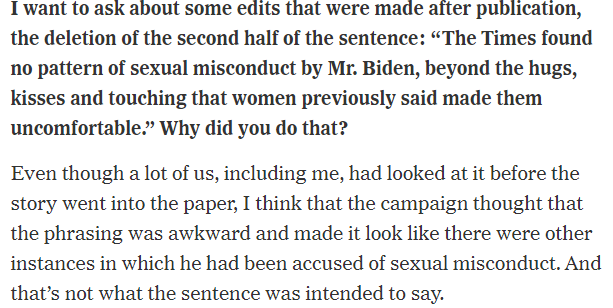 oh no not the campaign

It's been said many times, anyone who watched the media lining up against Bernie to bolster Biden and thought those kid-gloves would carry through the general is a deluded idiot.

Cillizza is, at best, an overpriced embarrassment CNN has chained itself to. He treats politics like a game played for his entertainment, rather than something that affects the lives of everyone in the country. His Twitter feed is a mess of played-out memes that make his reaction to any given event as predictable as a talking doll with a pull string. Though he’s treated as an expert on the American political establishment, his analysis comes with the naivete of a newborn child.

In short: Cillizza is bad, and his impeachment analysis shows just how bad.

Chris Cillizza is the David Brooks of Chuck Todds.

I've reached a point where I can tell a Cillizza article by its headline, because it looks exactly like those headlines on Looper that make me recoil in disgust even though, y'know, I like Chris Sims and would probably be interested in whatever his latest insights on Batman are but I just can't bring myself to click on something that says "17 Things About Harley Quinn You Probably Didn't Know, Because Fuck You, You're an Ignorant Motherfucker Who Compulsively Clicks On Headlines That Actively Insult You, You Dumb Bastard" or whatever.

There are a lot of perspectives in the media that I find deeply offensive and harmful, from the self-serving misinformation of right-wing talk radio and Fox News to the smug, condescending "balance" of the New York Times, but Cillizza is just a special kind of vapid dullard. I won't go so far as to say he's unique -- I'm pretty proud of that line about him being the David Brooks of Chuck Todds, if I'm being perfectly honest -- but he's vapid and insipid in a very specific way that nobody else can quite match. He's far from the only motherfucker who treats politics like it's a sport, but there's nobody else who's quite so eager to assign events in the news a goddamn rating depending on how much he was personally entertained by them.

Trump's latest coronavirus press conference; 3.5 stars; Trump said a lot of things that were plainly not true but on the other hand the White House Press Corps really looked bad when they I can't even finish this joke, I'm not very good at parodying this style of prose because when I try to get into that headspace I just fly into a rage, as you may have guessed from my attempt at a Looper headline. I just hate this shit so much, you guys.
Top

tl;dr a YouTuber broke containment and got onto cable television and you won't BELIEVE how hard he OWNED public discourse!! (Must watch... AMAZING!)

You're in the neighborhood, though that sounds more like a Ben Shapiro headline to me. The thing about smug shits like Shapiro is that at least they have a position and care enough about it to be smug about it. (I mean, say what you want about the tenets of national socialism, Dude; at least it's an ethos.)