The Democrats Will Also Shit Themselves.

The Democrats Will Also Shit Themselves.

Politico: Donna Brazile is making some explosive allegations, that the 2016 Democratic Primary campaign was indeed rigged by Hillary, that Debbie Wasserman-Schultz was essentially an empty-headed figurehead under Hillary's complete control, and that Hillary left the party in even worse financial straits than she took over.

The core of the allegation is that Hillary forced a bankrupt Democratic Party into a not-technically-illegal but unprecedented funding agreement that gave her campaign effectively near-total control of the party machinery over a year before she was the nominee. It also stripped many local and state campaigns of vast sums of money.

I think "rigged" is an exaggeration; the DNC simply doesn't have that much power or influence. The DNC's fuckery is unseemly, and it needs to be addressed (and now is a much better time to address it than a year in the past or future), but it didn't swing 3 million votes.

That said, it sure looks like Pérez is purging Sanders supporters, which suggests that fucking no one has learned anything.

That is, except Democratic voters. Donations to the DNC are way down, and fortunately that's because people are choosing to donate directly to campaigns.
Top

Yeah, even Brazile is straight-up saying "This is not illegal". But ya know, if it smells like a turd, I don't care whether it's against the law or not to eat it.

In any case Brazile is obviously not without bias here (I don't think it would have changed the outcome either), but the problem isn't accuracy, it's a nasty fight spilling out all over the place.

Mongrel wrote:The core of the allegation is that Hillary forced a bankrupt Democratic Party into a not-technically-illegal but unprecedented funding agreement that gave her campaign effectively near-total control of the party machinery over a year before she was the nominee.

Ah yes, this breaking Politico reporting from... two years ago?

Doesn't seem like the Sanders campaign was too concerned about it at the time, since shortly thereafter they set up the same agreement with the DNC.
Top

Brazile is saying that that agreement was misrepresented.

The two claims not present in the 2015 story are that 1) There was a "secret" adjunct agreement whereby Hillary was given effective control of the Democratic party in exchange for the funding agreement (thereby gaining a massive advantage over other candidates), and 2) The agreed-upon balance of funding in that agreement was not observed and that instead almost all the state and local funds from non-battleground states became a sort of slush fund funnelled to her campaign, when much more of that money should have stayed in the state and local races they were technically raised for.

How much of that is true or accurate, well, I guess we'll see. But yes, the agreement was fine if taken at face value, which it was at the time.

Yes, they both signed joint fundraising agreements, that's not the issue. The issue is that Clinton used her JFA starting from the moment it was signed to take control of the DNC and funnel all the money that was supposed to be kept reserved for the eventual candidate, and for down-ticket candidates in every state, directly into her primary campaign as soon as it landed. Which is why, as Brazile says, less than half of a percent of the state-specific funds raised for state campaigns stayed in state campaigns, the other 99.5% getting funneled through the DNC to the Hillary Victory Fund and Hillary For America.

Joint Fundraising Agreements are a way for candidates and the DNC to hold joint fundraisers, and split the proceeds. Bernie signed one but didn't exercise it, because he got his campaign money from small donations instead. Hillary used it as an excuse to use the fundraising apparatus of the DNC to raise money and siphon it all for herself, bankrupting the DNC, starting a year before the primaries were over, and the people in charge of the DNC all let this happen. That is the issue.

In a more lighthearted vein, I'm still not tired of this meme: 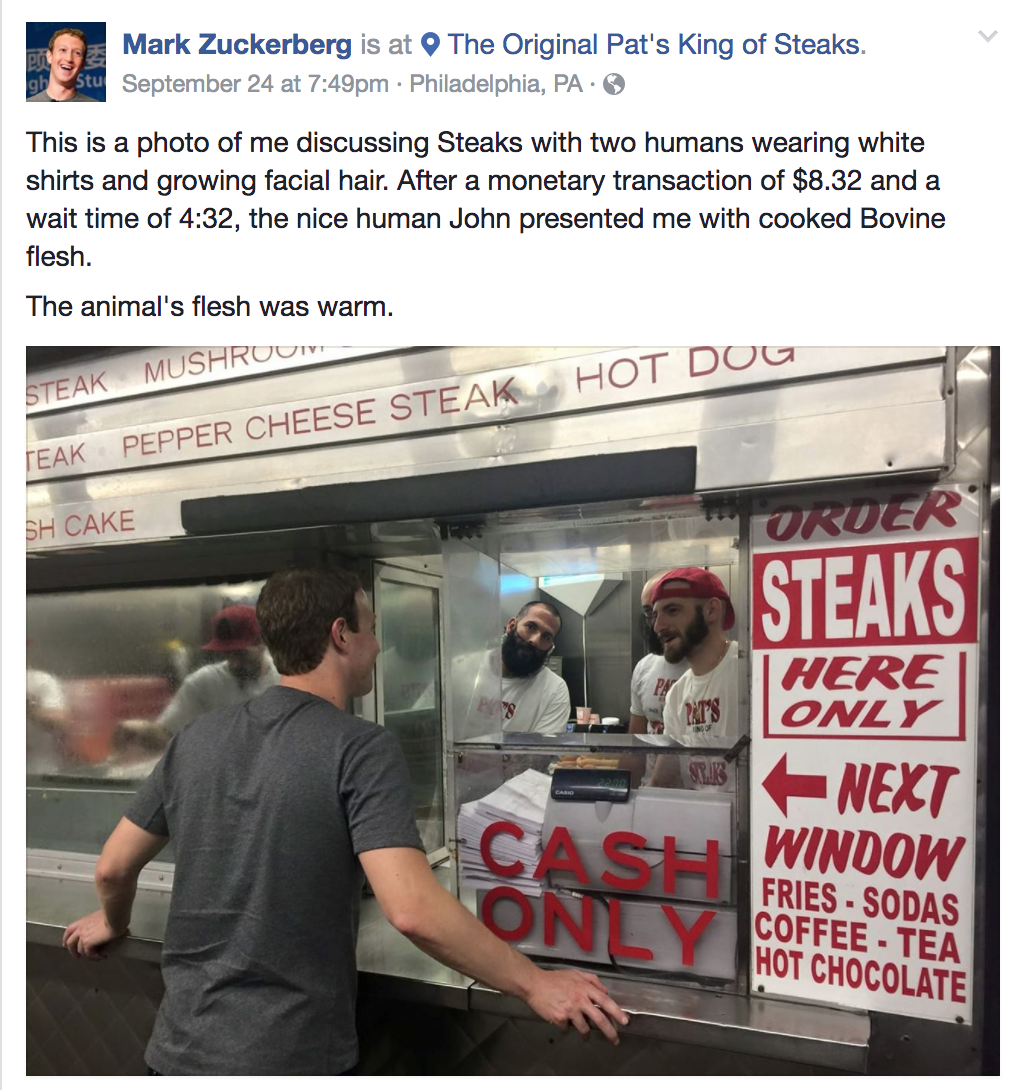 Not quite as good as Ted Cruz being the Zodiac Killer, but it's up there.

Sean McElwee at the Outline: Nothing in moderation: Democrats need to move farther to the left to regain power.

Our results suggest that the punditry has erred greatly in encouraging moderation. We averaged support for each policy across the districts, to measure the average across the districts. In the average DCCC target district, fifty-nine percent of the public support allowing a woman choose whether she wants to have an abortion and 57 percent support a path to citizenship. More than half of individuals in the average district either strongly or somewhat agree that white people have advantages because of their skin and 73 percent support a higher minimum wage. Less than half of the public in the average district believe that the government should prohibit spending on abortion (the so-called Hyde Amendment).

In addition, these districts are favorable towards climate policy, with 64 percent support for a renewable energy mandate and 68 percent support for the Environmental Protection Agency regulating carbon in the average district. Far from running away from gun control, Democrats can safely support an assault weapons ban, which has support among 61 percent of individuals in thes average district. Democrats can abandon “tough on crime” rhetoric, because 63 percent support for ending mandatory minimums. Even examining only the most contentious districts, a progressive Democrat would be on the right side of all ten issues modeled.

What we discovered here is along the lines of what Skovron has found in past research. In a study from March, Skovron and David Broockman found that Democratic state legislators regularly underestimate how liberal their constituents are (as do Republicans, who believe their constituents are far more conservative than they are in reality). Democrats simply aren’t confident that the voters support them on policy positions that we typically consider liberal, especially in areas like gun control and abortion, despite extensive data suggesting voters agree with Democratic positions on these issues.

I would disagree with his nomenclature. I would say that these are moderate positions, and that the punditry and the Democratic leadership have grossly misunderstood where the political center is.

Rhetorically, at least, the Democratic Party seems to be moving to the left; every possible presidential contender in the Senate has signed on to co-sponsor Sanders's Medicare-for-All bill. Of course, as we've seen among the Republicans, it's easy to posture when you're in the minority and know your bills aren't going to pass; it's no guarantee that your position will remain consistent once you've got a majority and your actions have consequences. Still, it's nice to see the Democrats moving in the right direction (or rather, the left one).

Gillibrand is probably the most visible example right now of a formerly conservative Democrat who's moved sharply to the left. Her role in pushing Franken out also demonstrates that she's both willing and able to push the party leadership into taking a position it doesn't like but which is popular with the public.

It's going to be an interesting couple of years.
Top

Hell, it's not a hypothetical. The Clinton years led directly to Bush, which led to a fairly big left swing into Obama, which led to a MASSIVE right swing in Trump. It's only natural that what people now want is an equally massive left swing.

The swings getting bigger is a bit worrisome though.

They're a symptom of a destabilizing middle class, which is the surest historical marker of a buckling civilization.

It's more complex than that, because the swings are also causing (as well as being caused by) the transition from a middle class civilization to a have/have not society. There are also other forces at work that eat away at stability, such as global warming, terrorism, increased worldwide nationalism, etc. They're all linked to each other, of course.

Anyway, my hope is a massive enough swing to the left will help heal (and prevent) some of the problems (and upcoming problems, like water) that the left's passivity and the right's aggressive hate-fucking have caused.

I do think there's a swing to the left on a number of important issues, universal healthcare probably chief among them. (The push for a paid Family Leave Act is an example that hasn't gotten as much attention, and the mere fact that the Overton window has expanded to even talking about UBI is a sign of the times too -- though I'd say as much as anything that's because it no longer takes any imagination to picture a world where everybody who drives a vehicle for a living is out of a job.) I'm just not so sure that this particular list -- higher wages, abortion access, gun control, etc. -- is the best illustration of that. These aren't positions that have recently become popular; these are positions that have always been popular but which politicians have largely treated as controversial.

(It is fair to say that these things have become more popular. The WSJ says that in 2013, 61% of Americans supported a $10.10 minimum wage; the survey I linked says 73% support a higher minimum wage (though not specifying exactly what that wage should be.))

I continue to believe that Clinton and Obama's triangulation was a mistake, and other Democrats' imitation of the same even moreso. Clinton and Obama were popular more because of their charisma than for any particular policy views; I think both of them could have moved a lot harder to the left and not lost many points on their approval ratings. (And, y'know, maybe spared us 15 years of gay people being treated like second-class citizens, gutting welfare in favor of putting more black people in prison, and a fucking global financial crisis caused by investment banking deregulation, Bill.)

So really, I believe there are two things going on here: yes, the public is moving to the left and embracing positions that were previously controversial. But the public has always been farther to the left than politicians and pundits thought, and many of these "controversial" positions were never that controversial to begin with.

A lot of Democrats do seem to be getting the message that this is where public opinion is going. The DNC isn't. The result of this is that people are donating directly to candidates and not to the DNC. This is a positive result.
Top

To be fair, I blame that one a bit more on Alan Greenspan. At the time everyone seemed to think he was a goddamned wizard who could do no wrong, and Bill was probably just as enraptured as anyone else.

With a primary election in California next Tuesday, I better find out who to vote for in this insane jungle bullshit. It would've been nice to, like, get sample ballots.

Not really a Democrat thing, per se, but I figured this was the least incorrect thread.

If you're confused, look at the author.

Who the fuck said "Hey, let's ask the guy who ran as the pro-war Democrat in 2004 what the Democrats should do to win elections"?
Top