Errata Update III: Some Honey in your University

This is the faction that most players probably picked when they were growing up, and was one of my favourites when I was young. No, not just because anyone who enjoys heady science fiction knows that BOOSTS TO YOUR SMARTS SKILL MAKE YOU SMARTER - it was nice seeing a Russian who broke most of the molds. It didn't hurt that he's a little - easy on the eyes.. 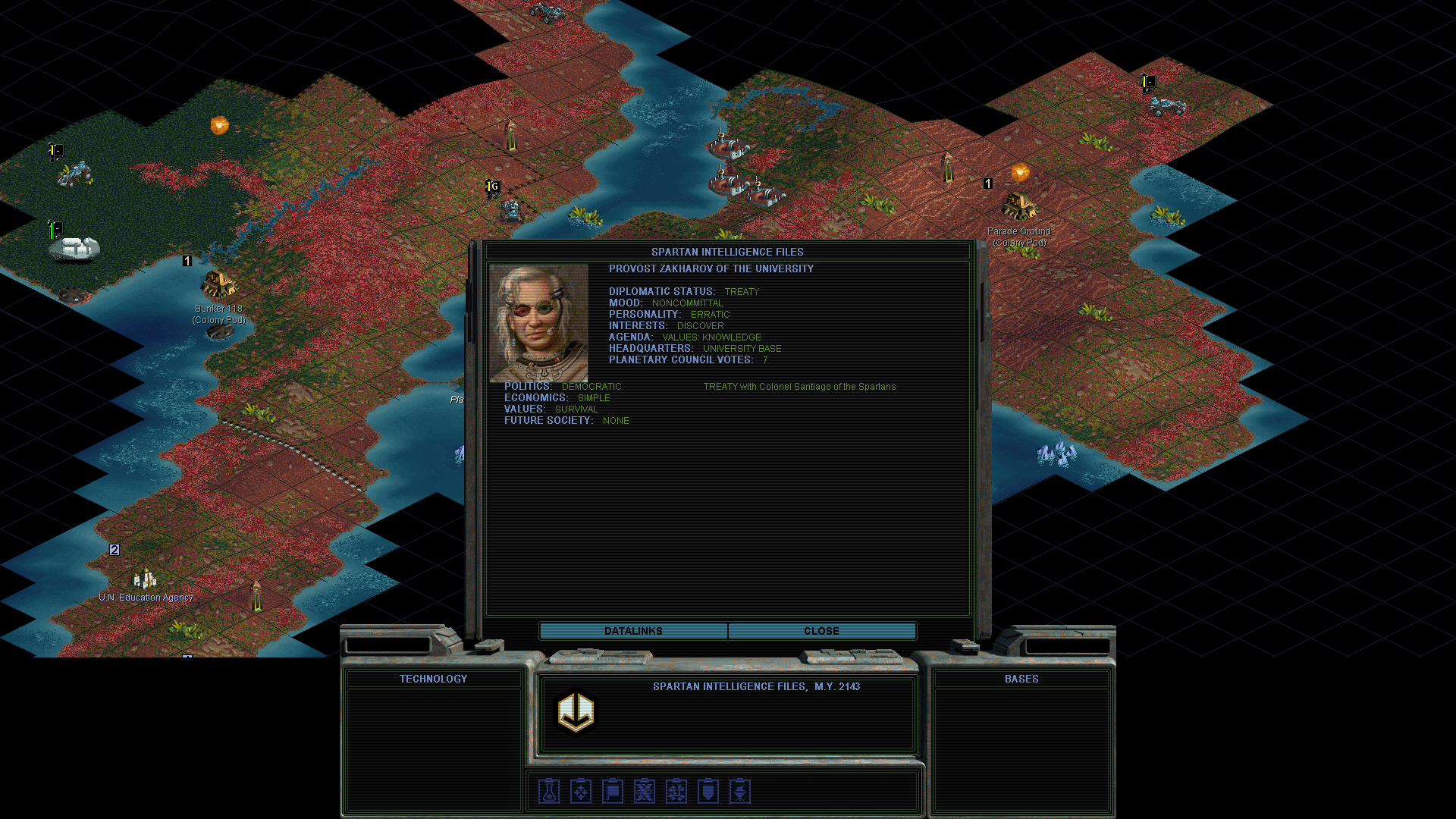 Proshka, as you can probably imagine, likes knowledge. So much so that the University is structured as just that - a University. Rather than having armies, it has security forces; each base is a fortified research facility - and it might be best to think of the University itself as a 'campus with a state.' 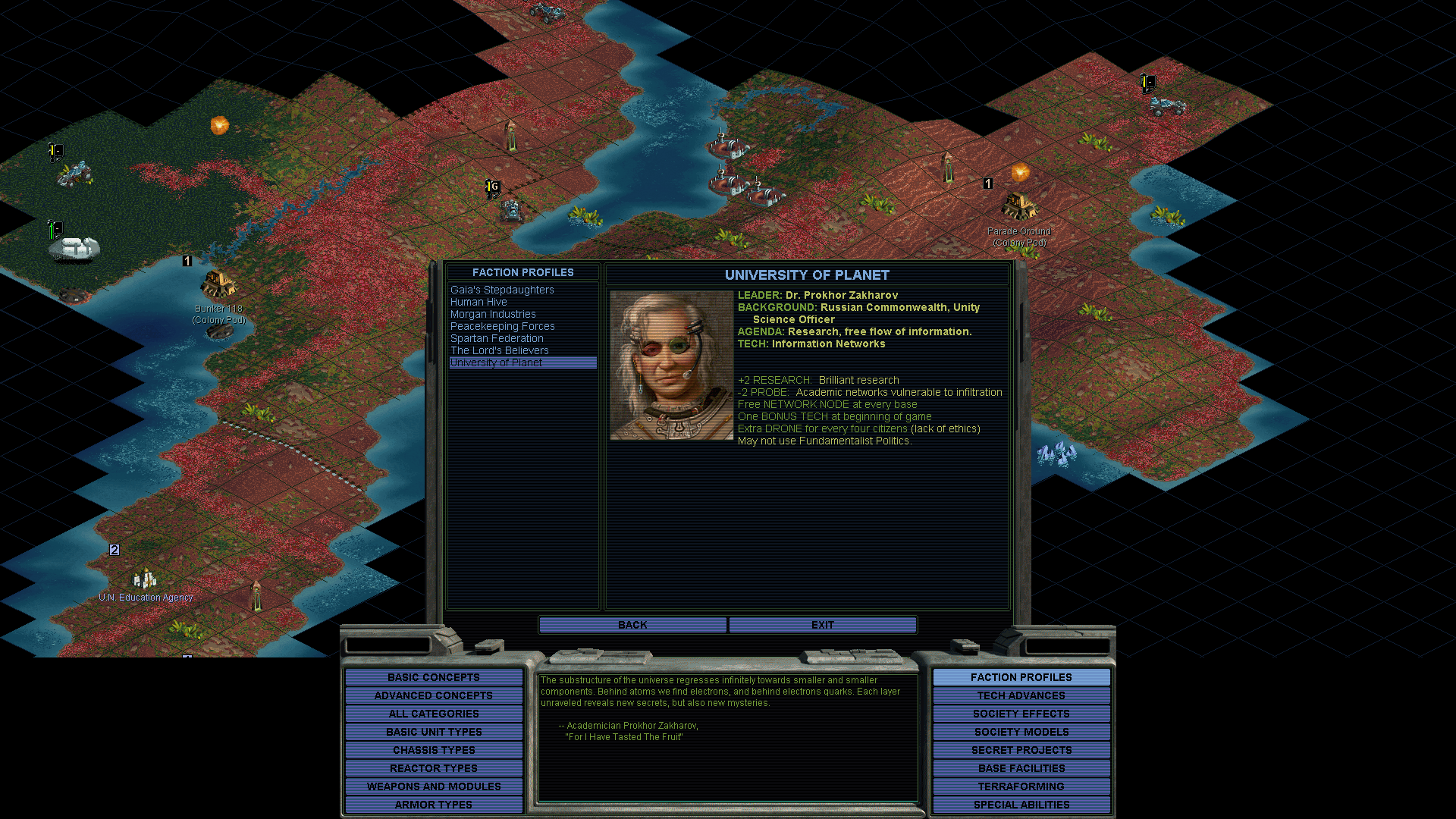 Most notable is the +2 research bonus. While not as flashy as some of the other bonuses out there, it's also one of the most globally effective; all else remaining constant, the University will always have a 20% tech discount. Whew!

But the penalty it faces is a steep one, too. We haven't even touched on probe teams yet, but this -2 penalty means that even a newbie probe team can probably find a few drunk researchers to extort. And skilled social workers with far-researching networks? Why, they might be very good at getting University types to spill their secrets...

Another bonus that can't be overlooked is the free Network Node at every base. That's a free building of permanent value you will never, ever have to build unless you destroy it, or it's destroyed by enemy bombardment. And it makes your research bonus even stronger! Geeze, who wouldn't want to live in this techno-utopia -

The fucking manual wrote:Extra DRONE for every four citizens (lack of ethics)

Hmn, okay, that sounds a little worrisome. I'm sure it's nothing, though.
Since... If the plebes want to be a problem, you can always have them nerve-stapled.
Nerve-stapling?

That red button. The one I mentioned last update.

What does it do?
Why - removes all ability to physically feel.
Oh, and prevents your populace from rebelling... Or becoming talents.
It's also considered an atrocity, and will unite most other factions against you...

But, if they're not contributing to research projects, what good are they?..

As ever, Proshka's profile - without commentary. Commented below for those who don't like going to other sites.

When skirmishing ended was brought back to Moscow to a high-ranking R & D position in the Russian Republic Ministry of Defense. Used a trip to a conference in Germany to transfer to the United Nations team responsible for developing planetside technology, U.N. Alpha Centauri Mission. Recommended unconditionally by high-ranking U.N. official for position of Chief Science Officer on ship; selection proceedings security locked until five years after launch.

Psych Profile: Technologist
Cognitive ability exceedingly high; genius level. Worldview driven almost exclusively through logic. Poor ethical judgment and inability to weigh in emotional factors; moderate deficiency in social functioning. Puts strong reliance on tools and his ability to use and adapt them; this, over human values, represents ultimate good. Ability to work as part of a team towards definable goals invaluable to mission, but poorly defined sense of ethics and tendency toward self- aggrandizement must be closely monitored by ranking superior.

Hmn. I wonder if these Psych Profiles are reliable..? But if so, it seems that a lot of these fellows have had...
Interesting lives...

But in closing, my own thoughts. I value Zakharov's pursuit of knowledge and willingness to push at the edge of what is considered common wisdom. The idea of being surrounded by books and intellectuals with no responsibilities save the furtherment of knowledge is a tempting one, that I think all dreamers must have considered at some point... If not, perhaps, grown out of.

Of course, he is not my favourite faction leader. That belongs to another. But I do love him...

Now, rather than a mechanics talk... A discussion!
We've discovered our first Social Engineering Policy, Democratic.
As highlighted by Xenophon, above... 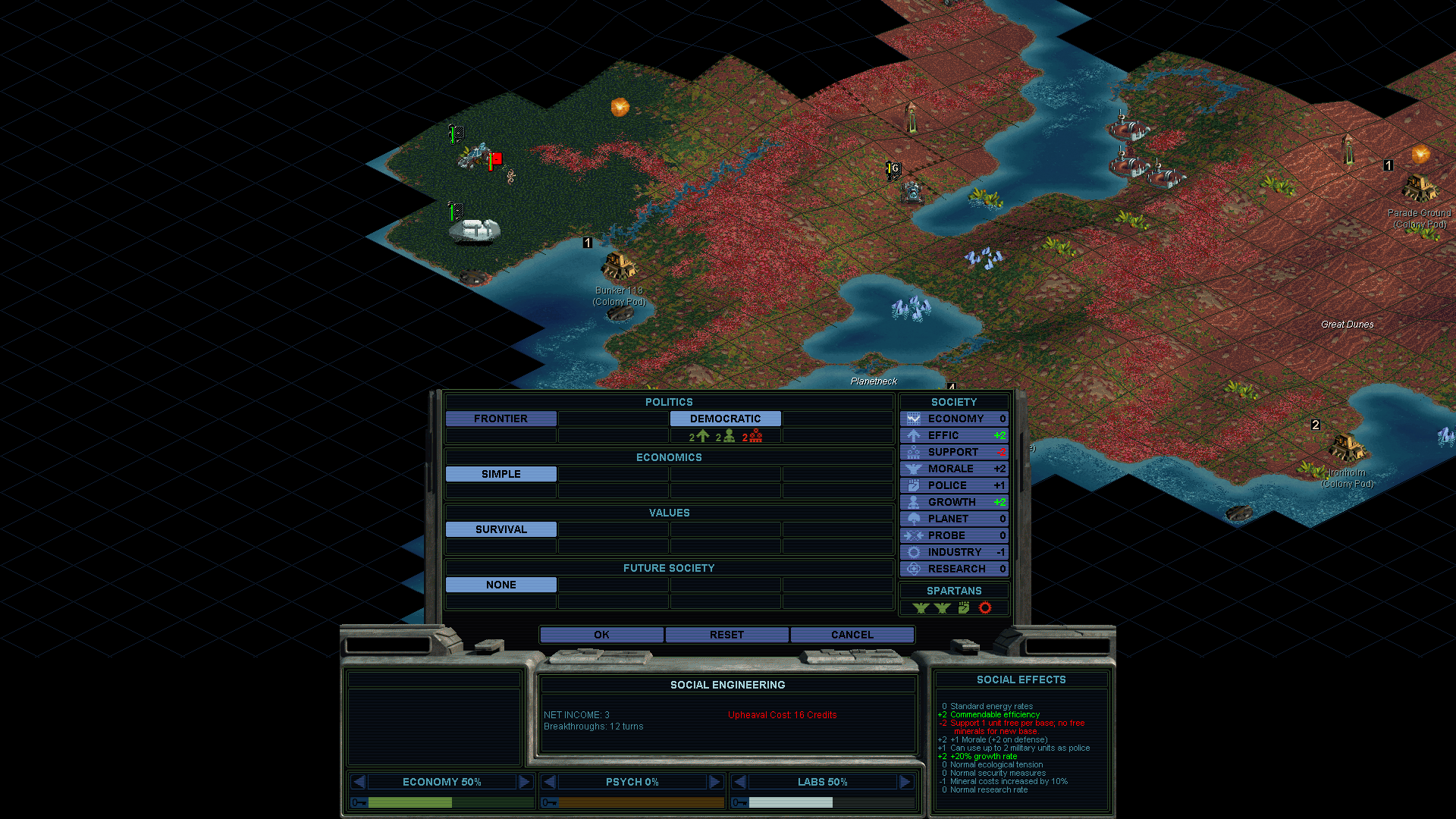 This would slightly hamper our ability to support a large army... For now.
Similarly, we would see an immediate boost to our efficiency - which means we can expand farther with less worry of waste - and our growth; happy people and a welfare net combined with increasing leisure time meaning that...

However, I don't think it's really up to me to decide on that choice unilaterally... At least not yet.
If you feel strongly about Democracy - or waiting for some other model to come along...
Why not contribute your thought on the matter?
Top

Wait, wait, wait. Wait wait wait wait. We've made contact with two different species of nerds already, and nobody's been shoved into a locker and shot through the aorta with lasers yet? And we're being given a referendum on democracy? Holy shit, we have a chance to put on crimper on Santiago being Santiago! Yes to Democracy! Yes to Sparta! A thousand times yes! Maybe we really are survivors!

Well, okay, the jury's still out on that last one, given that the first dude who got his mind fried by the local fauna was among those who talked me into climbing in this particular capsule. Inauspicious, that.

But hey, most of us are still kicking, and other folk in other regions appear to be doing well. I don't know about anyone else's morale, but mine's as high as it's ever been.
Top
Post Reply
22 posts