Like most normal humans, I stopped watching the Simpsons after the 9th, 10th, 11the etc. season.

But as Thad's mentioned, they still produce a few great moments every now and then.

Oh Gods damn it all. Fuck you, Disney.

"The closure of the animation company Blue Sky Studios by Disney has left its final film, a feature adaptation of the Noelle Stevenson comic Nimona, unreleased despite being nearly completed."

<beatbandito> oh good lord jesus
<beatbandito> has anyone seen the trailer for the invincible series?
<beatbandito> the voices are almost all miserable. And also it's really pushing the idea that it's cool because it's like a superhero story, but with BLOOD
<beatbandito> they also seem to have darkened the skin of a character that is nothing but an irredeemable asshole for most of the series, and I have a feeling may not get the redemption in this version
<beatbandito> also the character that turns out to be a gay joke (and is the only lgbtq representation in the story that I can think of, even as a joke) sounds like big gay al

> The Walking Dead
> Edgy superheroes with BLOOD!
No thanks.
Top

Grath wrote:> The Walking Dead
> Edgy superheroes with BLOOD!
No thanks.

Invincible is a comic with a lot of astoundingly problematic moments, but overall a good and meaningful story (like, really overall, abstracted at best for most of the run). In the right hands it could have been an incredible, topical series. This does not appear to be the right hands.

Like, all together there's probably an entire volume of just the drawn-out, edgy violence that ultimately says less than this one page: 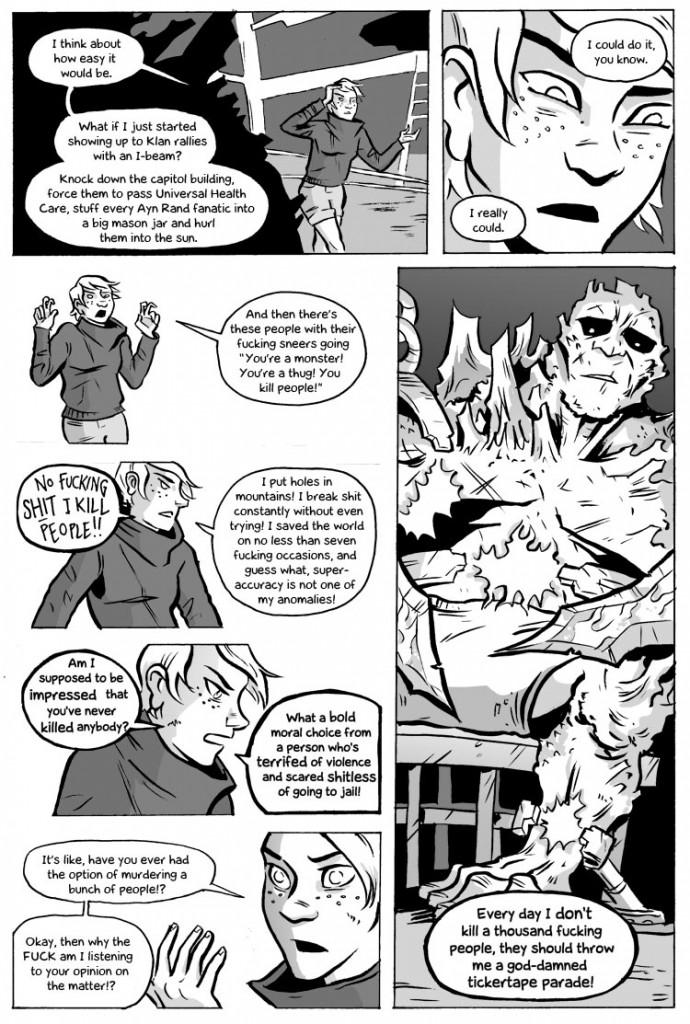 I read...maybe the first three trades? I really liked the first one, then the second felt like it was built too heavily around PLOT TWIST and graphic violence. (ETA: I checked my bookshelf and I've got the first five, and the ultraviolence/plot twist I was thinking of took place across volumes 2-3. So I guess I hung on a little longer than I remembered.)

I liked the first teaser quite a bit, the one that was just Mark and Noah playing catch. Second one didn't really do anything for me and yep, looks like they're leaning pretty heavily on the whole graphic violence thing.

The voice cast is solid; I'm seeing a good deal of celebrities in there like JK Simmons, Seth Rogen, Gillian Jacobs, and John Hamm, but I'm also seeing a lot of experienced VAs like Mark Hamill, Grey Griffin, Mae Whitman, and Kevin Michael Richardson. I can't say as any of the line reads in the trailer impressed me except for the ones by Simmons, but it's also a bunch of rapid-fire out-of-context snippets, so I don't feel like there's enough there for me to make a judgement on the voice acting.

Users browsing this forum: No registered users and 18 guests