Let's all go to the movies~

I'm not a fan of Cats but I have a certain respect for it. It's pretty much the purest example of musical theatre. It's not bogged down with unnecessary distractions like a plot, or characterization more complex than "old" or "fat". It's all about the singing, the dancing, the costumes, and the makeup -- and, assuming you're watching a competent production, all of those are excellent. It's all style, no substance -- and even if it's not my cup of tea, I recognize it as perfect at being what it wants to be.

That movie trailer sure looks like it's exactly inline with what I think of the live show. Can't see me paying full ticket price to see it in a theater, but I bet it'd be fun to watch stoned sometime.
Top 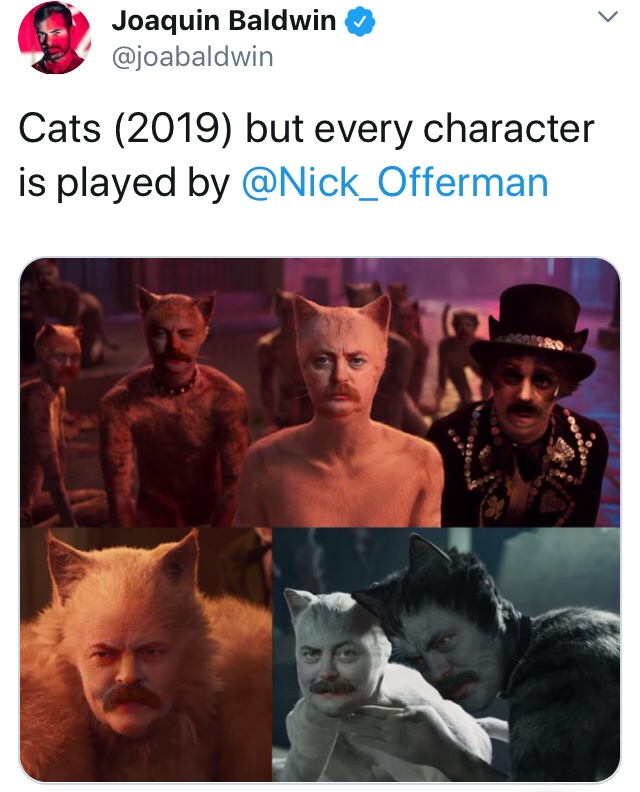 pacobird wrote:i am grateful to cats for making it so i never actually have to explain why i hate the sing-through musical (which i have previously called Really Bad Opera) so much

I'll still go to bat for Rent*, but the older I get the more self-conscious I am about it.

* not the Chris Columbus movie**

Other upcoming Marvel movies: The Eternals, Shang-Chi, and Blade.
Top

please use the full and incredible titles, THOR: LOVE AND THUNDER and DR. STRANGE IN THE MULTIVERSE OF MADNESS 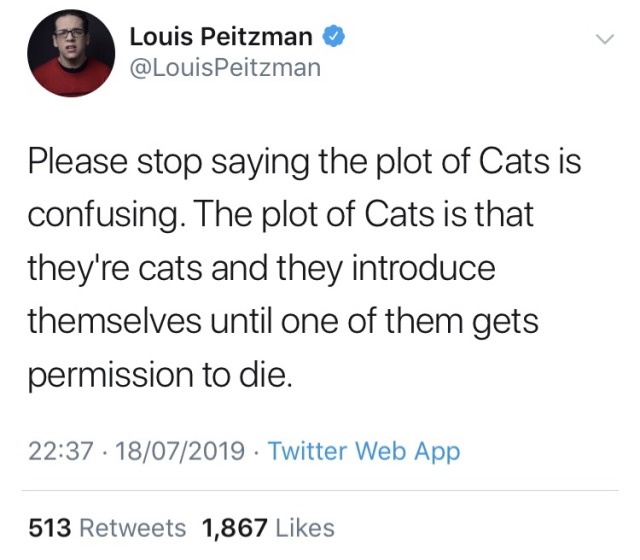 Saw UHF in the theater on Tuesday and The Wild Bunch on Wednesday.

I sure do like having an Alamo Drafthouse in the neighborhood.
Top

I can't ever go back to a normal theater ever again.
Top

I still go to regular theaters pretty frequently. I've got a niece who's too young for Alamo, and a nephew who's just hitting the point where he's old enough (took him to see UHF on Tuesday; that was his first time there), so when I take them out to a movie it's usually Harkins or AMC.

Alamo's definitely my preference. But there are other options that are acceptable. Harkins does some pretty cool shit too. I keep meaning to make it to their monthly Ghibli movie and then forgetting.
Top

Saw King of the Monsters finally. Overall, didn't like it much, but it had a lot of things in it I kind of liked. There's potential there, I'm just not particularly hopeful later movies will embrace the weird rather than go safer.

Spoilers below this point:

The fact that nuclear weapons are again and again used for good, saving the day, drives me insane. In this one, Ken Wantanabe's character, who carries a watch that was stopped by the Hiroshima bomb, ends his arc by bringing a nuclear weapon into Godzilla's chamber and detonating it to super-charge him to victory. Like, "thank god we have nuclear weapons" keeps being a thing and I loathe it.

"US marines save foreign mother and child in Rodan attack"

I figure the whole "blowing up a nuke in Godzilla's face to recharge him" bit is an homage to some other kaiju saga movie where they do that. It's the only reason why anyone would decide you need to fucking detonate a bomb in his face (and destroy the ruins of Atlantis) instead of, like, take the fissile materials out of it and shove them up his nose or something.

I like to imagine the US military's just been working on a REALLY dirty bomb, one that's like, as much radiation as you can leak out of the fucking thing, for no other reason than that they had to spend a certain amount of money to meet their budget year after year. At this point absolutely every war crime weapon has gotten greenlit and now there's just bunkers of these things, with your high-rad dirty boi bombs boxed up next to your oxygen destroyers and your smallpox tornado machines.
tumblr | twitter | wingnut circus | youtube

Hobbs & Shaw is a deeply silly movie and I thoroughly enjoyed it.
Top

Early reviews do seem to swing wildly from, as The Beat's headline quotes, a "bold reinvention of superhero cinema" to "irresponsible propaganda". The general tenor seems to be "King of Comedy/Taxi Driver but filtered through the current zeitgeist of incels becoming radicalized and murdering people."

I haven't seen it. I'll probably see it eventually, but I don't know when and I don't know what side I'll come down on. (My own bias is that the Joker shouldn't be a main character and shouldn't have an origin story beyond "Batman knocked him in a vat of chemicals", but that's kinda beside the point.)

I do bristle a bit at the notion that "satire doesn't work" if it's too subtle. Taxi Driver is a great goddamn movie, no matter how many idiots got the wrong message from it (up to and including John Hinckley Jr). There's always going to be some contingent of schmucks who don't understand satire, no matter how broad or obvious you make it. (I occasionally post in the Techdirt comments as Chip, a sockpuppet who hates government regulations and loves eating leaded paint chips. Here is a post where I say "All regulations are bad! I should be allowed to use DDT while watching the lake burn and eating delicious, delicious paint chips if I wanna!" And here is the reply by a person who does not understand that the post is a joke. And here is a lengthy response to a post where Chip refers to his education at Smilin' Jim's Unaccredited Forth Grade Acamedy. You want to produce satire that's so obvious nobody can possibly miss the joke? There's no such thing. Trust me, I've tried.) You can't really blame Palahniuk for the dipshits who've co-opted "snowflake", any more than you can blame the Wachowskis for the current popular usage of "red pill".

On the other hand...when Scorsese made Taxi Driver, he had no damn clue somebody was going to watch it and decide to shoot Ronald Reagan. The Wachowskis sure as hell didn't intend for anyone to see The Matrix and take it to mean that men need to fight back against a feminist conspiracy.

This is an instance of somebody making a movie that's quite clearly based in real-life terror and violence, and wrapping it around a famous character from pop culture who's already attracted a following of...exactly the sort of unbalanced young men the movie bases him on. What's the Zaphod line? "Ten out of ten for style, but minus several million for good thinking"?

Art should be timely, art should be provocative, art should reflect the state of the culture that produced it...but man, the very stuff that makes this movie timely makes it seem like maybe not such a good idea right now. There's really no way you can make a movie like this and not understand that its targets will accept it unironically as a rallying cry. I don't know about "propaganda", but "irresponsible" seems about right.
Top

But then I think, shit, isn't the logical conclusion of that argument that toxic masculinity should be off-limits to satire? And that doesn't seem right. And there is something to be said for the argument that if the Joker movie weren't out there for numbskulls to misinterpret, they'd just be misinterpreting Fight Club and Taxi Driver and The Matrix and Rick and Morty and, y'know, The Dark Knight. And for God's sake, anybody who's willing to take the fucking Joker as a role model is quite clearly somebody who's just willfully missing the point. Four-year-olds know the Joker is the bad guy. You don't really need the movie to come out and tell you that this guy is not a good guy; he's literally one of the most famous villains in all of fiction.

You know, I just thought of something.

I remember watching Batman '89 on VHS. My gran was puttering about, sort of half paying attention to it.

And she was really incensed by the scene where the Joker goes to the art gallery and defaces the paintings.

The violence didn't bother her; most of it was cartoonish and over-the-top, and the rest was gunplay of the sort you see in all kinds of PG-13 movies. But the thing that bothered her about the art gallery scene? Somebody could see that and get the idea to imitate it. (I'm sure now that she was thinking of Laszlo Toth and the Pieta.) So hell, there's Gran worrying about people imitating the Jack Nicholson Joker thirty years ago. I guess there's always going to be a concern that people who are unbalanced are going to be inspired by something they see a charismatic character do in a movie.

I dunno. I think it's a good debate to have. And I suppose in some ways it's a debate that's as old as storytelling.

And on some level it's probably just an argument about whether the film is competently made. Which I can't speak to, because I haven't seen it.
Top

If nothing else, the movie serves as a warning as to how fucking serious the problem of a shitload of lonely unsocialized depressed young men are.

No, really. If you don't believe me, wait a few days for another one of them to gun down a double-digit amount of people. Which is just as likely to be me or someone I love from here or real life as anyone else. So believe me when I say I want society to stop treating them as a joke and start treating them for their disease.

Or maybe the movie will just be another convenient scapegoat. Politicians and the media sure do love their narratives about how pop culture is responsible for mass killings.

Remember all the bullshit speculation about how the guy who shot up the showing of Dark Knight Rises might have been imitating the Joker? I'm sure not looking forward to another round of that.

There does seem to be a growing awareness that incels/MRAs/*Gate are a recruitment ground for violent, unstable young men (the SPLC has classified them as a hate group). And maybe Joker helps with that; I'm certainly a believer in pop art's ability to communicate social issues in a way that resonates with mainstream audiences. But aside from incels missing the point of the film, it sure seems like there's plenty of opportunity for politicians and news media to miss the point in a different way.
Top
Post Reply
1273 posts