Willie Nelson shrugging "mischievously like a kid in the back of the classroom" is so perfectly Willie Nelson.

So TIL this guy was the first dude to ever build a mixing console of any kind that integrated a computer system with an inline audio console. Eventually, his home system was a wild Frankenstein's Monster based on the original console (upgrading the compter from a big studio box to a Commodore 64), plus MIDI, a Fairlight II, and a Moog 3C. Dude was basically Soundwave.

He mostly just did sound engineering for other bands while also selling his mixing consoles, but like Alan Parsons he couldn't resist eventually having a go himself. This was his highest charting hit and it's pretty nuts.

There's a boxed set with a number of (AFAIK) previously-unreleased Weird Al tracks, and honestly this one feels like it could have been recorded last year as easily as prior to Polka Party.

Pac-Man played on the Dr. Demento show a few times back in the day but got hit with a C&D, which is the reason Al started asking permission before doing parodies. It did get an album release on Dr. Demento's Basement Tapes No. 4 back in 1995, but that album is long out-of-print.

Some of the other songs on the Medium Rarities album got previous releases too -- there's the single version of My Bologna; Headline News was on the Permanent Record: Al in the Box box set; the Spy Hard theme and the karaoke version of Since You've Been Gone were both on the Gump single CD; Homer and Marge was on The Simpsons: Testify; his cover of Beat on the Brat was on Dr. Demento's Covered in Punk anthology.

But there are songs he's never released.

Some of them are other songs that ran on Dr. Demento in the early days, like It's All Billy Joel to Me and Won't Eat Prunes Again.

Others are songs he's performed live.

And here's a medley that includes Laundry Day and Chicken Pot Pie but whose uploader has prevented embedding. The first time I saw him live was on that tour, at the Arizona State Fair. (It was also the first time I ever asked a girl out.)
Top

Oh shit son, how had I never heard this


Watch this space for further developments
How fleeting are all human passions compared with the massive continuity of ducks.
Top

Every time I'm about ready to drop BoingBoing from my feed reader over whatever "some right-wing piece of shit criticized Trump" video Frauenfelder's sharing this week, somebody posts something lovely and weird and reminds me why I haven't yet.

To wit, David Pescovitz: Neil Young and Devo's deeply weird early version of "Hey Hey, My My (Into the Black)"

This insanity was recorded in 1978 at San Francisco's Different Fur music studios as part of the dream sequence in Neil Young's film Human Highway (1982). From Shakey: Neil Young's Biography by Jimmy McDonough:

"In the wee hours of the morning at Different Fur, Young and Devo collaborated musically for the only time on an ultra-twisted version of a new song called 'Hey Hey, My My (Into the Black).' (…) 'I didn't want to sing about Johnny Rotten,' said Booji Boy's alter ego, [Mark] Mothersbaugh. 'So I changed it to Johnny Spud. And I inserted a line — 'Rust never sleeps.' The slogan (…) dated back to Devo's graphic-arts days, when they were promoting an automobile-rust-proofing outfit. 'We saw 'Rust never sleeps' as referring to corruption of innocence, de-evolution of the planet,' said Mothersbaugh. Neil Young would nick Booji Boy's impromptu mumbling both to rework the new song and for the title of his next album.

Young would interpret the line in his own way. 'It caught my ear,' Young told Mary Turner in 1979. 'I thought, 'Wow, right off they wrote better lyrics than I did. I can relate to 'Rust never sleeps.' It relates to my career. The longer I keep going, the longer I have to fight this corrosion.'" 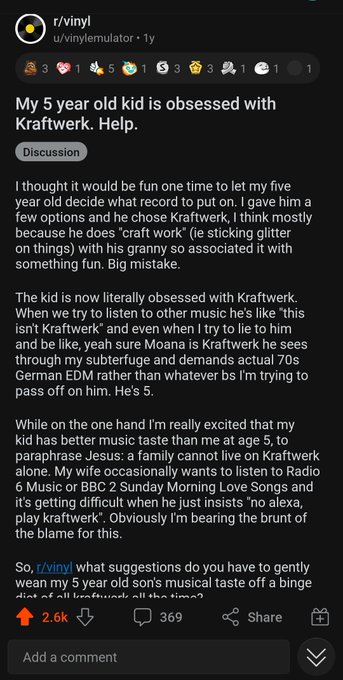 This is accurate. Discuss.

Very true. One Christmas I got a cassette of "Mad About Cartoons", which had a bunch of classical pieces that featured in beloved cartoons (and also Ren and Stimpy). It had stuff like The William Tell Overture, Anitra's Dance, Largo Al Factotum, and The Ride of the Valkyries. I'm pretty sure I wore that tape down to the wheels. 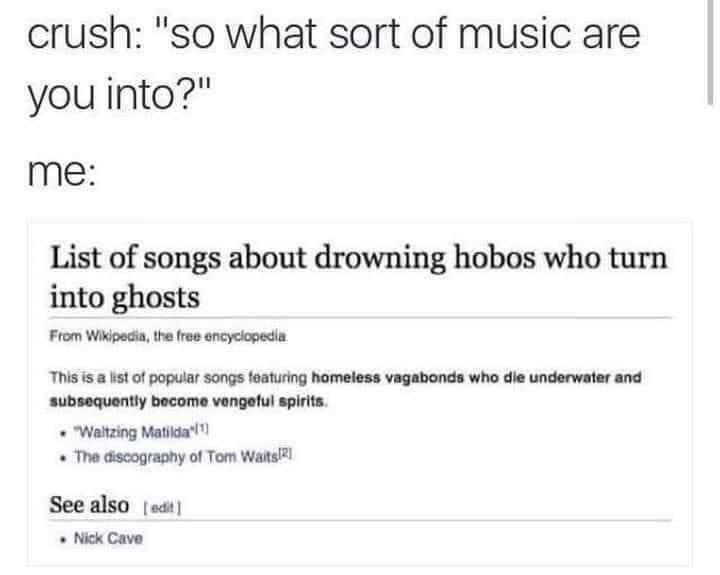 (It's Start Me Up, so, y'know, probably NSFW lyrics despite being a popular Stones song from forty years ago.)
Top

Somehow I didn't have this one in my .mp3s of the album and so forgot it even existed.

First time hearing it in maybe 20 years, still a fuckin' banger. And true, of course.

Charlie Parker stories are often really fucking cool, but this one is particularly so.

(whole set's great on that last one)