The story of how the IDW comics came to depict Arcee as both trans and gay is kind of fascinating but pretty messy.

It started early in the IDW run, where everything was rebooted and everyone was getting a new origin story. Writer Simon Furman decided to address Arcee's role as the token lady Transformer by explaining that Cybertronians are, by default, genderless, but a mad scientist turned Arcee into a female-gendered Cybertronian and caused her to freak out and become homicidal.

It was, as the kids say, problematic.

Subsequently, Furman left the series and a new group of writers were brought on for a soft relaunch they called "Phase Two". The main three writers were John Barber, James Roberts, and Mairghread Scott. Scott wrote a pretty good blog post about the Furman story, why it was offensive, and how she and the other two writers intended to address it.

All three writers introduced a number of new female Transformers (explaining that the reason we'd never seen them before is that none of them were from Cybertron, they were all from other planets that Cybertronians had colonized millions of years earlier, unbeknownst to the current generations of Cybertron).

Barber took Arcee's origin and massaged it into something less jaw-droppingly misguided. Arcee is trans; it was her choice to transition; and while she was subsequently tortured by a mad scientist, that's not the reason she identifies as female.

Barber still depicted her as something of a violent loner, to start with -- the Snake-Eyes of the group -- but one of the major character arcs over the course of his run was having her open up. She meets Aileron, a Transformer from the planet Caminus, where the Primes are literally worshipped as gods. Aileron is religious and naive; over the course of the series she and Arcee each sort of become a little more like the other. Aileron learns a few painful lessons about the world -- such as, Optimus Prime isn't a god, he's just a guy -- while Arcee learns to open up, trust people, and become part of the community rather than an outsider. And then eventually 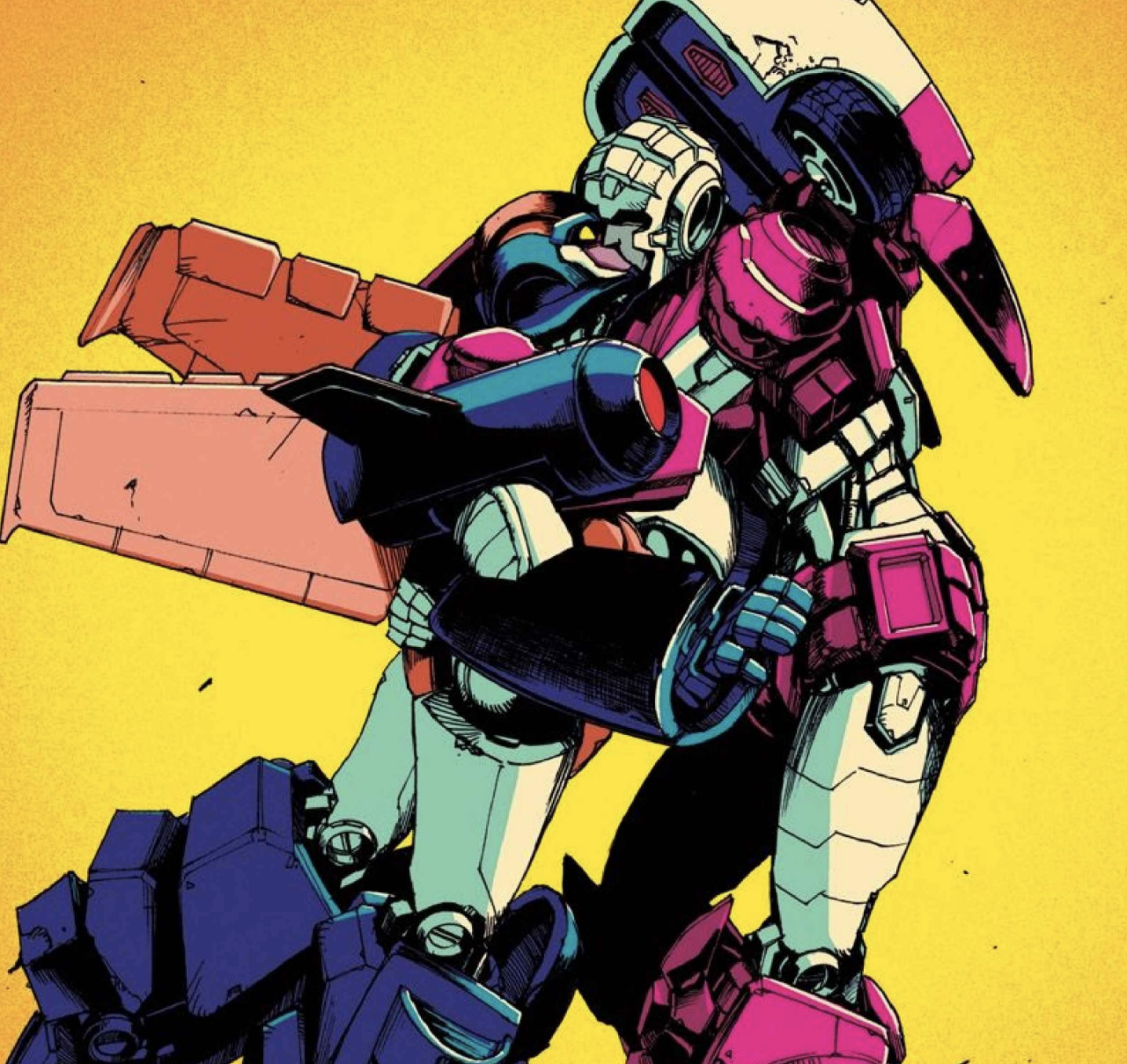 Anyway there was a big continuity reset after that and the Transformers/MLP crossover isn't canon anyway (it opens by gently making fun of fans trying to figure out where crossovers are supposed to fit into continuity), but between Arcee flirting with Rarity in Transformers/MLP and having a female partner in Transformers Galaxies (not Aileron this time, somebody new named Greenlight), it would appear that Arcee liking the ladies is one piece of continuity that has survived the latest reboot.
Top

I clicked on Scott's profile and at the top it's Starscream looking into the camera while smug because she's a Starscream fangirl because is it even possible to be a female transformers fan and not want to marry Starscream?

I really don't understand his appeal its fucking weird

Starscream is ambitious and motivated, but probably wont outhink or beat you in a fight. He's perfect.

Friday wrote:I clicked on Scott's profile and at the top it's Starscream looking into the camera while smug because she's a Starscream fangirl because is it even possible to be a female transformers fan and not want to marry Starscream?

That's a reblog of a poster named transformers-fangirl, but the image on the right is from a comic Scott wrote (Till All Are One #2, art by Sara Pitre-Durocher, colors by Priscilla Tramontano).

I really don't understand his appeal its fucking weird

Scott gave Starscream some real depth and complexity in Till All Are One. He's struggling between his ambition and his ego and his desire to be something better, to really do good in the world. He's the President of Cybertron at this point -- and, it should go without saying, got there through deceit and murder -- and now he's torn between his natural desire to hold onto power by any means necessary and to actually be a good leader who makes a difference to his people.

(He's probably also nagged by the realization that his ego has gotten in the way of his desires; in particular, Megatron turned himself in, was prepared to accept whatever judgement the Cybertronian justice system rendered against him, but then Starscream had to stand up at his trial and do a bunch of self-serving grandstanding, which pissed Megatron off enough that he changed his mind and cited an obscure provision of ancient Cybertronian law that allowed him to request an appeal to the Knights of Cybertron and go shuffle off into another comic book to join Rodimus's crew looking for the Knights. Megatron is, at this point in the story, free and having adventures in space entirely because Starscream didn't have the self-control to shut the fuck up and take the win.)

Starscream's also got a couple angels on his shoulder pressuring him to do the right thing. There's Windblade, who's recently become an important figure in Cybertronian leadership as a representative from Caminus and a city-speaker (ie the only person who can communicate with Metroplex) and, through a series of misadventures, winds up inside his mind and sees there really is a part of him that wants to be better. Starscream is also haunted by the ghost of Bumblebee, acting as his conscience and constantly nudging him to do the right thing instead of being such a bastard all the time. Starscream thinks Bumblebee is a figment of his imagination but it turns out later he actually isn't; he somehow got trapped on some other plane of existence and is able to communicate with Starscream but nobody else.

Scott said that her template for Starscream is that he's the victim of an abusive relationship. I don't think she meant to imply any kind of romantic connection between him and Megatron, but the result is similar: Starscream has trust issues because he's been mistreated.

Till All Are One builds to a climax where Starscream is running for re-election against Windblade and Elita-One. And then he goes up on the debate stage and confesses. To everything. The murders, the double-dealing, all his crimes. The series ends with Windblade as President of Cybertron and Starscream in prison.

Barber finished up the storyline in the Unicron miniseries, which ends with Starscream sacrificing himself to defeat Unicron, whining the whole time that he's never going to get the credit he deserves -- and then, in the epilogue, a recently-resurrected Bumblebee is seen conversing with Starscream's ghost.
Top

Barber finished up the storyline in the Unicron miniseries, which ends with Starscream sacrificing himself to defeat Unicron, whining the whole time that he's never going to get the credit he deserves -- and then, in the epilogue, a recently-resurrected Bumblebee is seen conversing with Starscream's ghost.

Wait, let me get this straight, and forgive me if my canon is wrong here, because I saw this shit a long time ago and like I said, while I enjoy the occasional Transformer I would not really call myself a fan.

So in the original, Generation 1 timeline/universe, Starscream's ghost/immortal spark shows up in Beast Wars to possess Waspinator and feeds the Predacons a line of bullshit about how he sacrificed himself to destroy Unicron in order to get the Preds to trust him, when in fact of course he dumped Megatron out the side of a spaceship, took over, and was subsequently vaporized by Megs when he came back as Galvatron. (Here's a hint!)

The fact that they made Starscream's bullshit lie into how he actually goes out now is fantastic.

I haven't watched that episode of Beast Wars in probably more than 20 years so I'd forgotten that detail, but well-spotted; that is a great callback.

Speaking of Beast Wars, I haven't even gotten into Rattrap's role in this story, which is basically as Starscream's Starscream, the slimy, amoral lackey who does his dirty work while not-so-secretly plotting against him -- though it turns out that's because he's one of the good guys after all, and has been sent by Optimus to keep an eye on him. Starscream occasionally laments Rattrap's lack of ambition in never trying to betray and overthrow him.
Top
Post Reply
46 posts