Friday wrote:Romero's most important work, Night of the Living Dead, showed that this trope is true even when there are literal monsters at the door.

I believe, honestly, that people want this trope to be discredited not because it's lazy, but because they just want to hang on to that inner belief that "people are good at heart. Deep down, they're good."

Nah bro. They ain't, and if 2020 was your fucking wake up call, then you were hopelessly naive and ignorant of all history. Which you were, because we teach that people are good, and we teach that history was clean. So it wasn't entirely your fault, but read a fucking book please.

OTOH, 2020 is an illustration that Romero was wrong, that the entire zombie apocalypse genre he created is wrong, that for the most part people don't turn into desperate, uncontrollable id monsters when a plague threatens their civilization. Indeed, for the most part the people doing real harm aren't the people saying "Fuck it, absent the laws of society I'm going to murder and rape and hurt other people with impunity"; they're the people desperately trying to preserve the status quo and act like everything is normal and go about their daily routines, and become angry when that's threatened.

Most people aren't like that, though. Most people are doing the best they can with the hand they've been dealt. They're trying to do what's best not just for themselves and their family, but for their community and everybody else around them.

(I ain't being my old 20-something edgelord self. I don't believe that people are bad anymore either. They're just people. You guys are a good example of a group of people that I do believe to be good at heart, and I have quite a few irl friends who I think that about too.)

Maybe. I'd say the human behavior we've seen these past months do indicate that, on balance, there are more people who are good than people who are bad. But the bad ones sure have an outsized effect.
Top

I'd say the human behavior we've seen these past months do indicate that, on balance, there are more people who are good than people who are bad. But the bad ones sure have an outsized effect.

Yeah, I agree with this. It's just I think that people were shocked to discover that 30-40% of the population is so ignorant, stupid, or outright bigoted and corrupt that they would back a man who is so incredibly obviously shitty.

I definitely have a very different belief about fundamentalist Christians than I did before 2016.

I used to think they had awful, corrosive views but at least those views were sincerely held.

Now it's clear to me that all the moralizing really is pretextual, and it really is just that they hate women and minorities. Simple as that.

The irony is that this makes my worldview a lot more like theirs -- simple, lacking in nuance, seeing one side of the political spectrum as altogether evil and an existential threat, people who can't be bargained or reasoned with but must be defeated at all costs.

That's an extremely disquieting headspace to be in.

At least hopefully come January those people won't be in charge anymore, and we can get back to government by the people trying to bargain and reason with them.
Top

Thad wrote:I used to think they had awful, corrosive views but at least those views were sincerely held.

FWIW, you have to be very very selective about which bible passages you use to justify a lot of things Evangelists justify.

The folks who I know who are both decent people and strong believers generally have examined the bible in great detail, and for every bigoted or reactionary passage, they usually know at least one, if not several contradicting passages, and always have lots of examples of the bible preaching tolerance, charity, love, and even egalitarianism.

I have a lot of respect for these friends. In almost every case, their devotion, scholarship, and patience leads them to constantly chip away at any false evangelists they know, and it's a powerful line of attack coming at them from a side they're not used to being approached from. In their minds they have a duty to fight false preachers; as it turns out "Well, ACKSHUALLY..." can be a surprisingly big gun in biblefights.

Many evengalists are exactly as you describe - just looking to justify the horrible beliefs they have anyway, and simply ignoring any criticism (the same mindset as Constitutionalists who don't bother with what it actually says). But some simply never had the initiative to examine their beliefs, but genuinely pride themselves on being devout and can be steered away with sufficient persistence and scholarship.

For the ones you can reach, it's one thing to unquestioningly obey a 2000-ish-year old book of moral direction, it's quite another to be confronted with the fact that you're not even obeying it properly.

I'm not talking about Jimmy Carter here, or my Pentecostal preacher great-grandfather who, to hear my grandpa tell it, turned against Nixon after learning that he used curse words in private. I'm sure there's a minority of white evangelicals out there who are anti-Trump. I'm also not talking about nonwhite evangelicals, who are mostly anti-Trump. Anti-Trump socons are still eligible for the "they have awful, corrosive views but at least those views are sincerely held" category in my estimation.

But by and large, the overwhelming majority of American white evangelical Christians are pro-Trump, a figure who is so self-evidently a deeply immoral man, by their own frequently-stated standards, that the only possible justification for supporting him is that he does harm to people they want to do harm to.

And I'm very definitely including the ones who say "I don't like him but he'll appoint pro-life judges" as a subset of that set.

That's not morality. That's not different values. It's dishonesty, hypocrisy, and the absence of values.
Top

Oh in terms of numbers I don't know what percentages we've got, but I have little doubt that the ones you describe are very much a majority.

nosimpleway wrote:On the other hand, "I desperately want the abnormal and supernatural to be real" is a weird mindset to have when your best friend is a talking half-anthro dog.

that kind of is the joke there

shaggy has a sample of god's own whimsy right in front of him and it's just normal
http://zarat.us
Top

Dungeon cops won me over with this:

Oof. the creator of Stand Still Stay Silent (a pretty good comic of happy-go-lucky dumbasses making their way through a pseudo-zombie post-apocalypse) made another comic they released on its own, and it's like

it's when a creator, high on audience, decides to make a work that really expresses their inner concerns and worries about the world straight up, and the most civil way you can react is with an embarrassed cough

Well, more to the point, it's straight-up Evangelical as fuck.

The art's very pretty, I suppose.

9 After this I looked, and there before me was a great multitude that no one could count, from every nation, tribe, people and language, standing before the throne and before the Lamb. They were wearing white robes and were holding palm branches in their hands.
10 And they cried out in a loud voice: 'It's because you be on that phone!
- revelations, chapter 7

9 After this I looked, and there before me was a great multitude that no one could count, from every nation, tribe, people and language, standing before the throne and before the Lamb. They were wearing white robes and were holding palm branches in their hands.
10 And they cried out in a loud voice: 'It's because you be on that phone!
- revelations, chapter 7

I very occasionally miss karma so I can give some sort of tangible (if meaningless) reward for posts of this caliber.

i have learned more about the bad rabbit comic

i read the bunny comic and i'm pretty sure i know what this is about
there was a Thing with SSSS a few years(?) ago about some kind of racially insensitive joke i don't remember the context of
it got smoothed over as being poorly translated from finnish but they got a lot of heat for it at the time
can't believe it gave them terminal fucking boomer brain
it's cancel culture + christian persecution + yellow peril

I feel there won't be a lot of criticism directly visible by Minna on Insta etc because as pointed out, the criticism levelled at her before horrified her, then radicalised her rather than educated her. 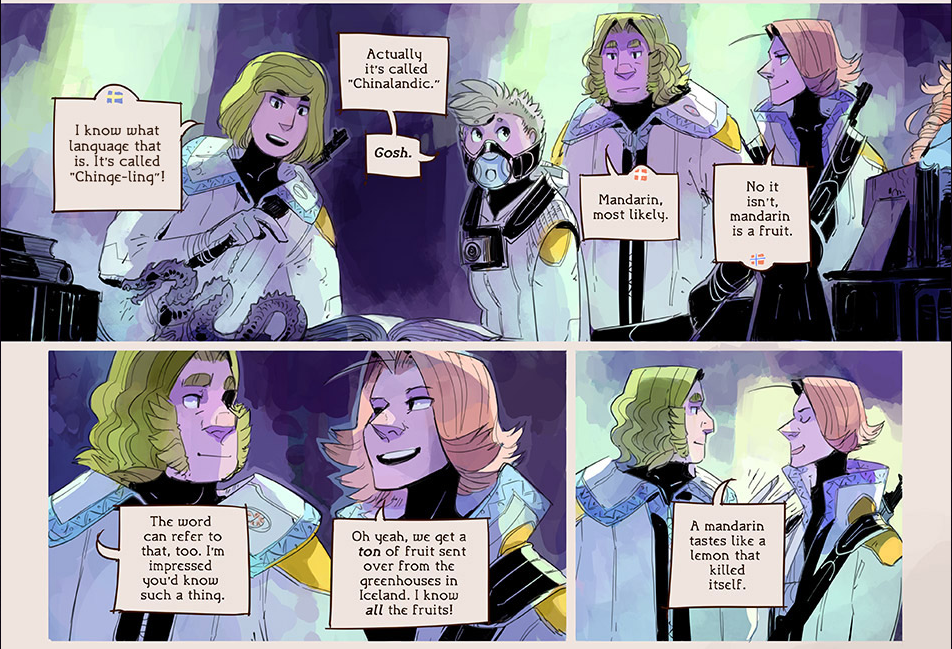 oh my god
fuck me
gotta have my yellow peril!
it's been there all along

Reading the panels: "Chinge-ling" oh so they basically wanted to write that the language is literally "ching chong wing wong"

Okay but is the point not that everyone in the party except for the big guy is distressingly ignorant?

I had figured that when she wrote the bit about the Icelandic mage reaching out to a dead servant of an old god (yep the jesus) she did a little too much research and got hooked
http://zarat.us
Top

Does anyone have experience of what's going on with a person as they progress from confident modern thinker to statements like "And through many turns God, by his providence, allowed me to undertand something of how truly sinful my nature is, and how little I deserve mercy." ?

I can't process that as anything short of schizophrenic.
Top

yeah I'm one of the biggest misanthrope's you'll ever meet and that Original Sin shit makes my skin crawl.

I might hate people for their cruelty, thoughtlessness, vanity and utter banality, but I'll never hate someone because they didn't fucking pray enough or had lustful thoughts or wanted a cookie or whatever.

And hating yourself for that kind of shit always, always leads to hating it in others. (I know, because I hate my own cruelty, thoughtlessness, vanity, and banality.)

I take it SSSS does a Thelma and Louise at some point as the author's brain worms mature.

... just realised what this saga reminds me of. Every interview log where an SCP researcher falls prey to the cognitohazard they wrote the safety procedures on.
Top
Post Reply
329 posts