I'm 100% behind him. That title is awful and having it forced on you is likewise.

Nobody wants to work for Peanuts.

I'd say the new John Ridley/Juann Cabal Black Panther is off to a solid start.

I was disappointed by Ridley's Batman, but so far his take on T'Challa is compelling. He's following the status quo Coates left -- T'Challa is overextended, trying to balance his role as King of Wakanda, Emperor of the Intergalactic Empire, and Chairman of the Avengers -- but there's also a distinct element of Priest's Panther, the master planner with trust issues.

So it turns out that, when Black Panther decided to open Wakanda to the world, he made a backup plan in case things went wrong. He doesn't trust democracy; one election can turn an ally into an enemy. And so he recruited ten people who he trusted, faked their deaths, and placed them as sleeper agents all over the world, deeply embedded in fake identities and awaiting his signal in case he ever needed anybody assassinated. Only now somebody's found out about them and started killing them.

I think it's a good hook! It's been awhile since I've seen someone tackle this side of Panther, the paranoid bastard who's always looking over his shoulder and making contingency plans. I'm interested in seeing where this goes.
Top 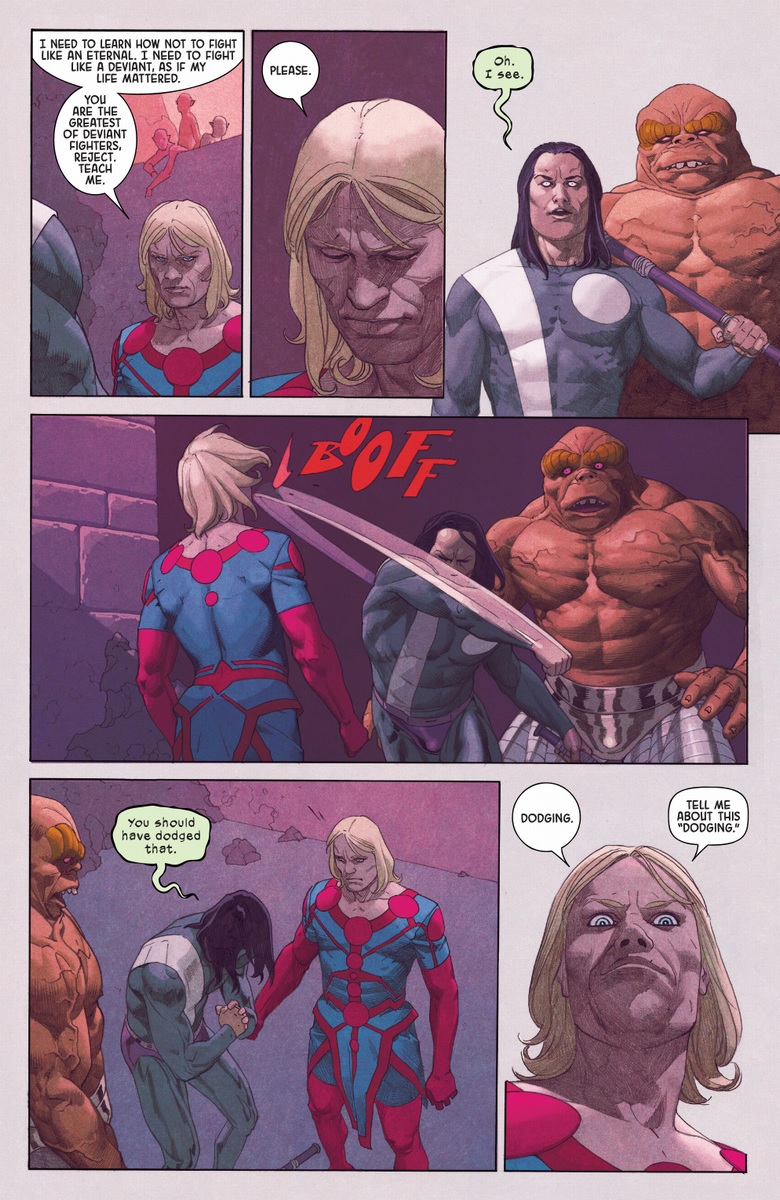 Oh is that why her n

DC's been putting out some good-looking Jack Kirby reprint collections. I picked up OMAC and it's fucking wild.

(scans via mars will send no more)

I've said before that '70s Kirby is an acquired taste, but man, I just love this stuff. I find it particularly fascinating as a '70s riff on Captain America; it's a similar story of a 98-pound weakling being transformed by super-science into a super-soldier (whereupon the bad guys immediately kill the scientist responsible for the transformation), but where Simon and Kirby's anxieties of the '40s came from an obvious source, Kirby was worried about a different kind of villain by the '70s:

It's not quite cyberpunk, but it's getting there; it's set in "the world that's coming", a capitalist nightmare where corporations build phony people and the super-rich can rent entire cities. And Buddy Blank is transformed into OMAC not by a syringe of super-soldier serum but by an ever-vigilant satellite called Brother Eye.

Kirby always had big ideas, in any decade. But there's something about his work in the '70s, free from Stan Lee and firmly in control of his stories, something loud and raw and pure that really clicks with me.
Top

yeah people in the 70s, fresh from having the right kind of eyes and seeing the wave rolling back at the end of the 60s, looked ahead and saw us, right now

Thad wrote:Catwoman: Lonely City asks the question, "What if The Dark Knight Returns, but Catwoman?" and so far at least it's really very good!

Man, I know everyone's hyped to see Michael Keaton play Batman again, but this comic's got me thinking what I really want to see is Michelle Pfeiffer as Old Lady Selina.
Top 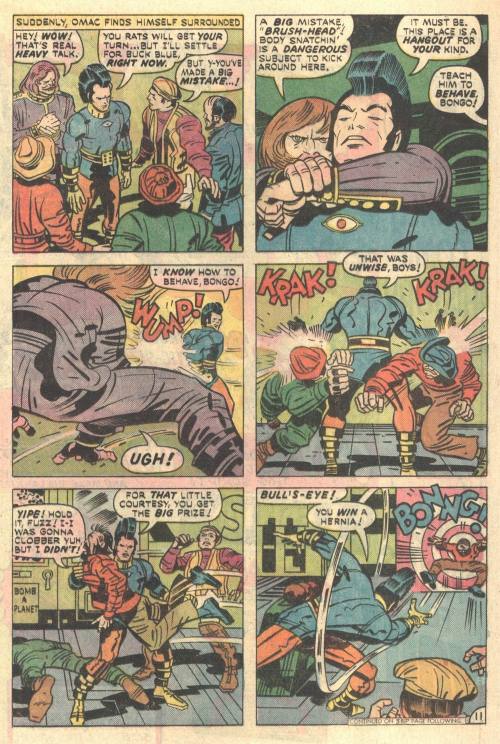 This comic fucking rules. I will never understand people who don't like '70s DC Kirby.
Top

It's not like there's nothing to criticize -- it's light on memorable characters, and the worldbuilding is serviceable but simple. It's full of big, bold sci-fi ideas, but Kirby doesn't dwell on any of them for long; they're thought-provoking but he mainly mines them for striking visuals and an excuse for big Kirby fight scenes.

He's kind of on autopilot here; his contract with DC is almost up, they've cancelled four of the five books he's launched there, he doesn't see any future there and he's got one foot out the door.

But even lesser Kirby is still Kirby. He's still got great ideas and some of the best storytelling chops the medium's ever seen. OMAC's different from his other work in that it's fast-paced and propulsive; this is Kirby in action-movie mode.
Top

Saga is back and it's filthy.

Does it count as a three-year time jump if it's actually been three years?
Top

To this day I've never read any of Tom King's in-continuity ongoing series, but I've really loved almost all of his out-of-continuity limited series (with the notable exception of Heroes in Crisis; I bought #1, didn't like it, found a copy of #2 next to a dumpster, picked it up and read it, and conceded that whoever left it there had a point).

His latest, with artist Greg Smallwood, is Human Target, a neo-noir murder mystery set against the colorful backdrop of the JLI era. The hook: Christopher Chance (whose deal, for those who don't know, is that people who are under some kind of threat hire him to impersonate them) does a job for Lex Luthor, and he fails: he (Chris) gets poisoned and is given twelve days to live. He decides to use those twelve days to solve his own murder. Not an easy task, as the list of people who'd want to kill Lex Luthor is a long one, and includes everybody in the Justice League.

Anyway, I'm enjoying the heck out of it. King's shown a real gift for taking existing characters in unusual directions, telling stories that don't resemble what everyone else is doing, and finding the perfect artist to bring the story to life. Here's Smallwood's cover for Human Target #4, in all its '60s-and-'80s-retro glory:

Fitting that that underlying noir idea of "solve your own murder", was (IIRC) something first done by Jim Steranko.