I've never read a Power Pack comic before, but the new series is written by Ryan North (with artist Nico Leon) and it's the same kind of fun all-ages book as his runs on Adventure Time and Squirrel Girl. Good to have him back. (After a much longer absence than originally planned; this is one of those books that was due out months ago but was delayed by COVID. It's got ads for comics "coming in April 2020.")
Top

Quick recap: the CBLDF has, historically, been an important organization that fights censorship and protects publishers, creators, and sellers against censorious lawsuits. But its director, Charles Browning, had a long history of sexual harassment and assault, and even though this was reported in 2006, he got away with it until the MeToo movement refocused attention on it in 2018.

I've always liked Trexler; he's been comics journalism's go-to guy on legal topics for decades, and written extensively on topics like the Siegel and Kirby heirs' efforts to reclaim copyrights. He seems to have some good ideas both on how to reform the culture at CBLDF that protected Browning (and marketed itself with a lot of pretty disgusting sexist imagery) and on how to keep the organization relevant in an age where the nature of censorship has changed (read: a comic shop owner's probably not going to get arrested for selling comics with nudity in them, but parents' groups are trying to get LGBT comics banned from school libraries) but creators' rights continue to be a major concern.

I like what he has to say, and I'm hoping that, coming out of this, the CBLDF can be a force for good going forward.
Top 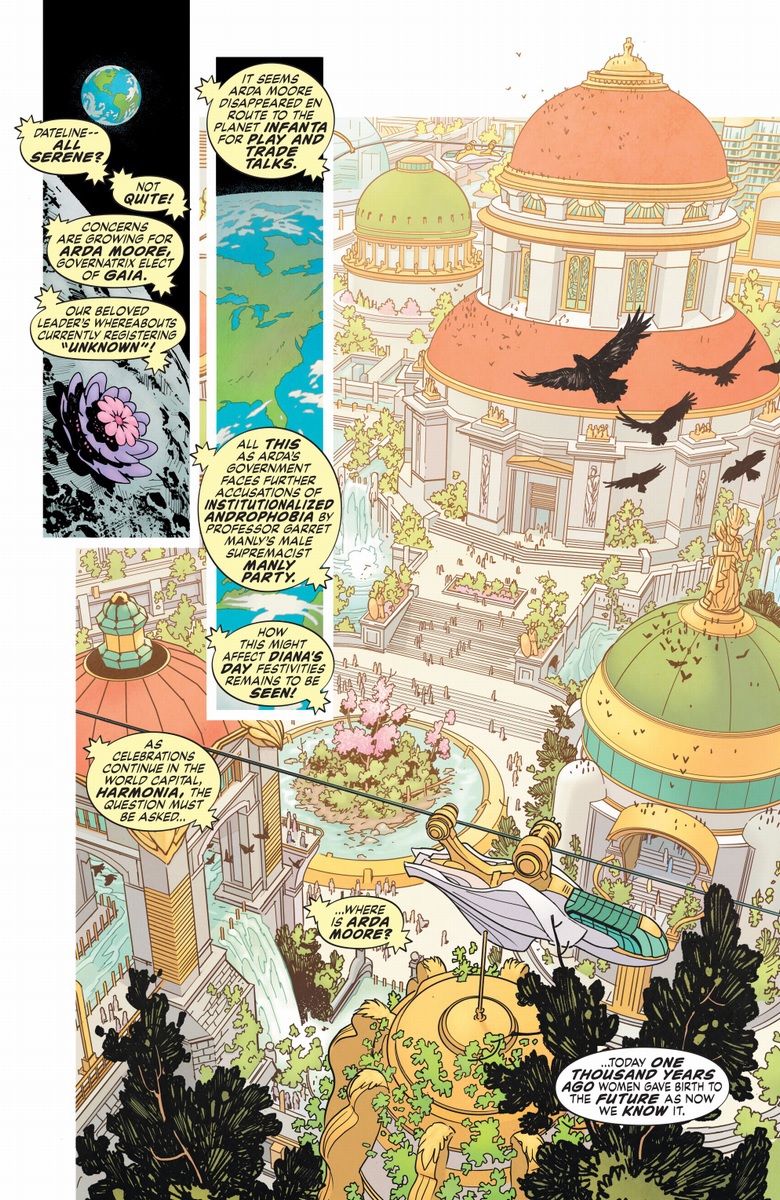 &t= doesn't work in the youtube tag, so you're going to want to skip to about 4:25 because there are technical difficulties at the beginning of the video.

Anyhow! Kurt Busiek is not just my favorite comics writer, he's also somebody who just plain has interesting things to say. He's got an encyclopedic knowledge of comics history, he's an outspoken advocate for creators' rights, and he knows a lot about the business as well. And it's not just that he knows stuff; he's also really good at explaining it in simple, easy-to-understand terms. (I've seen him wade into comments threads and patiently correct people who are pushy and wrong.)

This interview is nominally about Marvels, and there's some interesting stuff about Marvels in there. (The most interesting bit of trivia I picked up: at one point the plan was something more like Untold Tales of Spider-Man; he and Ross pitched the idea that they'd tell new stories set in old continuity. It was Tom DeFalco who suggested that instead, they recontextualize old stories and look at them from Phil Sheldon's perspective.) But on the way there, he talks about how he got interested in comics (Busiek fans will be unsurprised that it was the continuity and shared history he fell in love with), and afterward he and the interviewer, Brian Hibbs, have a good conversation about the comics business. (Hibbs is no slouch either; his long-running column, Tilting at Windmills, is probably the best resource there is on how things look from the comics retailer's perspective.)

He also says that he can't give us an official announcement yet, but more Astro City and Autumnlands are coming, and he's hoping to bring back Arrowsmith too.

And I know Kurt hates it when people take things he says out of context and speculate wildly about them, so I'll try not to do that, but I will say that I pricked up my ears at his comment that one of the nice things about creator-ownership is that if his publisher can't keep Astro City in print, he can take it to another publisher that can. Now, it's entirely possible he just means that hypothetically, and Astro City may very well be staying at DC. But I wouldn't rule out seeing it move to another publisher either.
Top 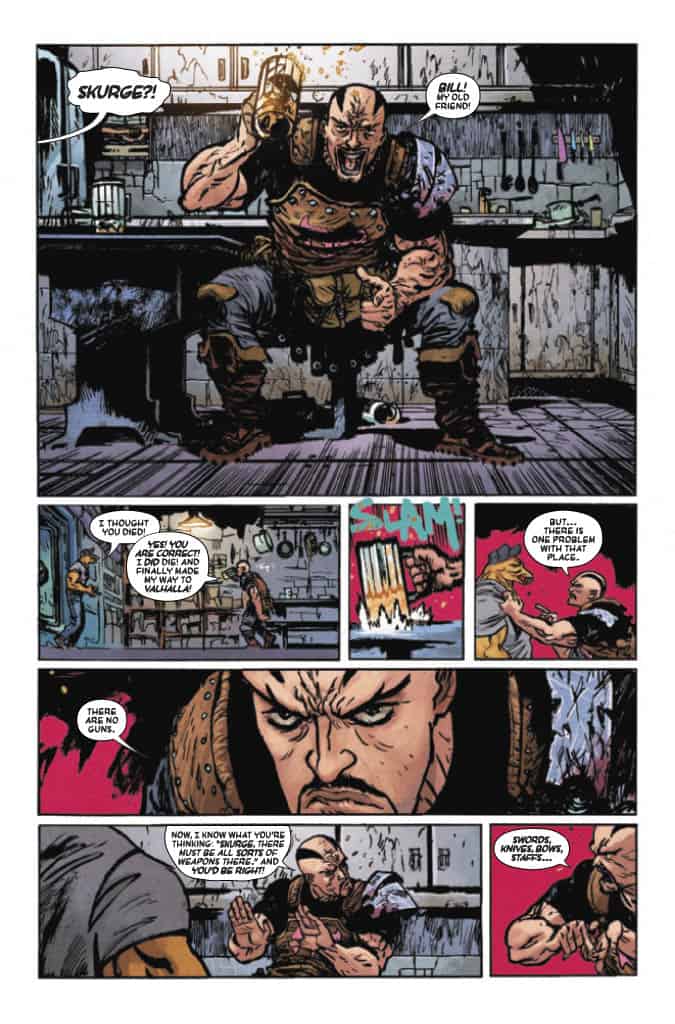 Static Season 1 #1 has the balls to charge you a $5 cover price and then spend most of its page count describing the cool shit that happened in some other comic.
Top

I guess Batman: The Adventures Continue must be doing decent sales, because now they're following it up with Justice League Infinity, by JM DeMatteis, James Tucker, and Ethen Beavers.

I'd say that, at least from issue #1, I think I like it better than the Batman series. It doesn't have the sense that it exists to sell toys, or that it's shooting for a more violent, "mature" vibe just because it can.

It does a good job exploring some of the dangling threads at the end of JLU -- Martian Manhunter has retired and is currently living as an Indian woman; Amazo is still exploring the cosmos searching for meaning; Darkseid is gone and Apokolips is experiencing a power vacuum.

DeMatteis clearly has his favorites -- J'onn narrates, and Mister Miracle, Big Barda, Booster Gold, and Blue Beetle all play prominent roles in the story (was Blue Beetle even on JLU?) -- but that's not a complaint; nothing wrong with a little of the old JLI in the new JLI.

Anyhow, enjoying this one so far. If you want new stories set in the DCAU, this is well worth picking up.
Top

The comic that's got all the Fox News crowd pining for the good old days when Captain America wasn't political, he just punched Hitler in the face, is The United States of Captain America.

It's good! I love the idea of various Captains America (Steve, Sam, Bucky, and John) traveling the country and teaming up with other folks who've taken on the Captain America mantle to help inspire people.

The first new Captain America (other than the villain who's dressing up as Cap, whose identity has not yet been revealed) is Aaron Fischer, the Captain America of the Railways, and if the phrase "the Captain America of the Railways" does not immediately put a smile on your face, I don't know what's even wrong with you. Aaron is a teen runaway who rides the rails righting wrongs, his origin story is a lot like that episode of Batman: TAS where Batman loses his memory and becomes a hobo that everybody hates but I like because hobo Batman, and he's got the socons in a lather because he's gay. He's great, and I look forward to meeting the various other Caps this series is going to introduce.
Top

Wait are you referring to the episode of TAS that's Cool Hand Luke but with Batman? Because that episode rules
Top

Almost always the first episode that comes to mind when someone mentions Batman: TAS

The Clayface in the hall of mirrors one is usually the next one (that's the very first Clayface TAS episode, IIRC?).

Nah, he's not in a hall of mirrors, he's in a TV studio where his past acting roles are coming on screen. It's also a scene where Hiroyuki Aoyama was a key animator, and you'd recognize some of his other animation work in Akira.
Top

KingRoyal wrote:Wait are you referring to the episode of TAS that's Cool Hand Luke but with Batman? Because that episode rules

Hey, I'm with you. But it routinely shows up near the bottom on ranked lists.
Top

WTF is wrong with people. It's an absolute classic "superhero loses his powers but shows he's a hero anyway" story.

I agree with that list's top ranked choice though, Almost Got 'Em is funny as hell and a classic Batman story in any medium.

In this case it's the people who are wrong. Except about "Tyger, Tyger"
Top

Mongrel wrote:WTF is wrong with people. It's an absolute classic "superhero loses his powers but shows he's a hero anyway" story.

It's also got Bruce Wayne volunteering at a soup kitchen, which is one of my favorite examples of Batman understanding that there's more to helping people than just punching murder clowns.
Top

Mongrel wrote:WTF is wrong with people. It's an absolute classic "superhero loses his powers but shows he's a hero anyway" story.

It's also got Bruce Wayne volunteering at a soup kitchen, which is one of my favorite examples of Batman understanding that there's more to helping people than just punching murder clowns.

That too! And he helps some of the victims get jobs at the end of the episode (at least that one resourceful guy who helps him) IIRC.

Another thought which occurs to me is that that episode is one of the most socially-relevant ones the B:TAS folks ever made and which still retains its relevance today, maybe even moreso now than then, because villains kidnapping and murdering disenfranchised people on the margins of society who "no one will miss" is extremely true-to-life. The people being "forgettable" is the point.

Though that article writer probably means forgettable in terms of writing, but I thought the hobos were pretty decently characterized and written. They're ordinary guys, but that's just fine.

Chris Sims also mentioned The Forgotten's undeserved negative reputation in one of his X-Men reviews back in 2013:

In our discussion of the worst episodes of good shows, a few of you pointed to "The Forgotten" from Batman: The Animated Series, and I have never been more disappointed in you. Seriously, if you don't think HOBO BATMAN LITERALLY KICKING HIS WAY THROUGH AMNESIA AND DEMOLISHING A LABOR CAMP is awesome, then you know where the door is. I'll let it slide this time because [X-Men] Season 2 has been hard on all of us, but y'all motherf**kers need to come correct for Season 3.

All right, time for the X-Men. But come on, Alfred flies the Batplane. What more do you want?