Boyne himself replies later, he seems to be just as amused by it and is owning it.

I was going to ask (100% unsarcastically and honestly!) how on earth you're able to keep up with the moral stances or failing of random-ass fifth string creators, but apparently there's trans content in his novel (which is presumably just as idiotic), so, okay, makes sense he'd be on the radar. 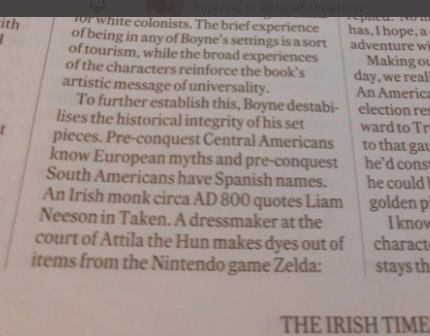 The Liam Neeson thing is fucking killing me.

O to have the confidence, and bulletproof credibility, of a mediocre white man.

Apropos of nothing, it's not even a valid dye recipe in Breath of the Wild.

Apparently the Berenstain bears have pivoted to right-wing christian stuff.

I dunno, they can still get religious, though I think "The Berenstein Bears Celebrate Yeshiva" was pretty harmless.

Jokes aside, what happened was Mike Berenstein took over the books from his parents - Stan was Jewish and Jan was Episcopalian but they were basically both ordinary non-practising types - and became an evangelist nutcase. So, fuck evengelicals, as usual.

But anyway, in discovering that, I also found this bit

In a 1989 editorial titled "Drown the Berenstain Bears", The Washington Post columnist Charles Krauthammer lamented the popularity of the books, writing that "it is not just the smugness and complacency of the stories that is so irritating," but the bears themselves, particularly "the post-feminist Papa Bear, the Alan Alda of grizzlies, a wimp so passive and fumbling he makes Dagwood Bumstead look like Batman." He described Mama Bear as "the final flowering of the grade-school prissy, the one with perfect posture and impeccable handwriting...and now you have to visit her every night. The reason is, of course, that kids love them. My boy, 4, cannot get enough of these bears."[22]

Imagine hating some girl you went to school with that much.

Mongrel wrote:Imagine hating some girl you went to school with that much.

It's been clear to me for decades that Scott Adams never got over being picked on by mean girls in school.
Top
Post Reply
150 posts