MST3K, Rifftrax, and the rest

I've only watched the first seven minutes, but the two new shorts are in there somewhere.
Top

Coming Tuesday the 17th: the Mads riff The Brain from Planet Arous.

I haven't watched their last few livestreams, but I enjoyed the Glen or Glenda one back in July.
Top

The Mads' next riff will be Santa Claus vs. the Devil (which was just "Santa Claus" when MST3K riffed it in season 5).
Top

Also, I watched nearly all of that Puppet Camp video I embedded at the top of the page, and there's some great stuff in there. Some of it sucks (I made it a couple minutes into the interview with the TP puppet and fast-forwarded; I'm not too good for poop jokes and I think there's some humor to be mined from a sentient roll of toilet paper, but this was just lazy jokes delivered in an ear-splitting falsetto), but most of it's pretty good, and the real highlight is the interview with Wayne White, the puppeteer who played Randy on Pee-Wee's Playhouse and who I learned is also the guy who made this music video:

I never watched a lot of MTV, but we got cable around the time that video was in heavy rotation and I freakin' loved it. I didn't know who Georges Melies was at the time, I just knew the visual style in the video was wild and didn't look like anything else on TV, M or otherwise.

Also the two new shorts are in the video (they played during the Turkey Day marathon too). They're pretty good, though I find it frickin' distracting that the middle silhouette is clearly not Joel's. (And he seems freakishly tall, though I think part of that is that Tom and Crow are farther down in their seats than usual.)
Top

The Mads have some shorts up on the Dumb Industries channel on Twitch. Apparently there's more to come.

They've also got another livestream coming up: a riff of The Choppers on February 9.
Top

The Mads have a channel on YouTube now. Looks to be the same videos as the aforementioned Twitch channel.

Their next riff is The Phantom from Space, March 9. They're raising money to keep MST3K makeup artist Crist Ballas from being crushed in the orphan-crushing machine.
Top

AV Club has an oral history of MST3K: The Movie. Some interesting trivia, including early plans from back when Joel was still involved.

You know, I forget who it was who I heard an interview where they talked about how much Jim Mallon likes to constantly make sneering little asides about how much he hates Hollywood, but man, it's true.
Top

Kickstarter update: confirmation that Jonah and Emily will switch off hosting duties, each with their own Servo and Crow (and they're past $3.3M, so presumably at this point it'll be 3 episodes each). Joel talks about production, too, and how they plan to continue with the remote shoots they did to put the new shorts together last year.

(And wait, there was a short with Emily? I didn't see that one, I only saw the two with Joel, Josh, and Bill.)

I guess I missed the memo, but per the latest Kickstarter update it looks like this ran last night:


We had our first livestream last night, and if you were one of the 5000+ folks who showed up to hang out with us on YouTube, Facebook or Twitch, I hope you had as much fun as we did. I was pleased to have a chance to introduce more of you to our newest cast members: Emily, Conor, Nate and Yvonne, and to show you the short riff they did for Turkey Day last year. We also answered some of your questions, and then for the "main event," we all watched Hobgoblins together and chatted all the way through.

(EDIT: Replaced the image with the updated version, Thursday 4/29. Which itself is subject to change. They should at least fix the part where they refer to Bill as "original Crow".)

(EDIT: Updated again Friday 4/30; a timezone conversion mistake has been fixed and Bill is now correctly listed as "Crow #2".)
Top

Just saw about this project that took the blue-ray release of the mst3k movie's cut scenes to restore and recreate the "full" movie that's about 50% longer with all content known to exist.

Last night they screened Untamed Youth, with most of the Servos (no Kevin).

I haven't finished watching it, but apparently they announced Josh will appear as Larry in the upcoming season, as well as writing for it. (Given that Joel's planning to host an episode if the Kickstarter hits a certain threshold, I wouldn't be surprised if Josh played Servo in that episode, either.)

And this'll be tonight's stream, once it starts:

They're watching Quest of the Delta Knights (with tonight's guest Mary Jo Pehl), which, as previously noted, is something of a big deal since it's one of the 11 remaining episodes that have never had an official release.

As for the 10 others: there are 3 Olive Films movies that seem like the rights may be available in the not-too-distant future (Fire Maidens from Outer Space, The Deadly Bees, The Space Children) -- and hey, that's 4, that's enough for another DVD box set, for those who are into the whole physical media thing.

The other 7 are rated "extremely unlikely" -- it's the 5 Susan Hart movies, the Wade Williams movie, and the Godzilla movie. (Not to be crass, but Hart and Williams are both 79 years old, so the rights situation with those films could change any time.)
Top

Talking of hard-to-come-by episodes: I've been searching for years for a DVD rip of Godzilla vs. Megalon, instead of the recorded-off-the-air VHS transfers I've seen most places.

I think I finally found one. Search for "MST3K Season02 DVDrip".

(And note that the rest of the episodes in the torrent *are* available commercially. So, y'know, I've got no moral objection to torrenting the one that's out of print, but keep in mind that MST3K (1) is still a going concern trying to raise money to make new episodes and (2) pays royalties to past contributors when you buy old episodes. Don't pirate episodes if you can get them legally.)
Top

Kickstarter's also added a bundle of 130 episodes for $400, which is...well, a lot less than you'd be paying to get those episodes individually, but good Lord that's a lot of money to spend on MST3K. (I assume it's every original-series episode they currently have the rights cleared for; anyway, here's a full list.)

There's also a still-pretty-expensive but not quite so eye-watering $140 option that just includes the 45 episodes that weren't part of the $300 bundle on the last Kickstarter.

I'm also seeing that the $85 digital reward tier is listed as "no longer available", which feels like it's probably a mistake; I doubt they meant to put a limit on the number of people who could choose that reward tier. I'd expect it to get fixed before too long.

ETA Apparently they only meant to include 5 classic episodes on the $85 tier, not all 10, and they've changed the listing to reflect that. Anybody who pledged before the change still gets all 10; that's the "no longer available" listing I saw under my pledge.

The Rifftrax of Birdemic is now free to watch on YouTube. All official-like.

I already have a buttload of unwatched MST3K and Rifftrax, but I suspect by tomorrow I'll have more. 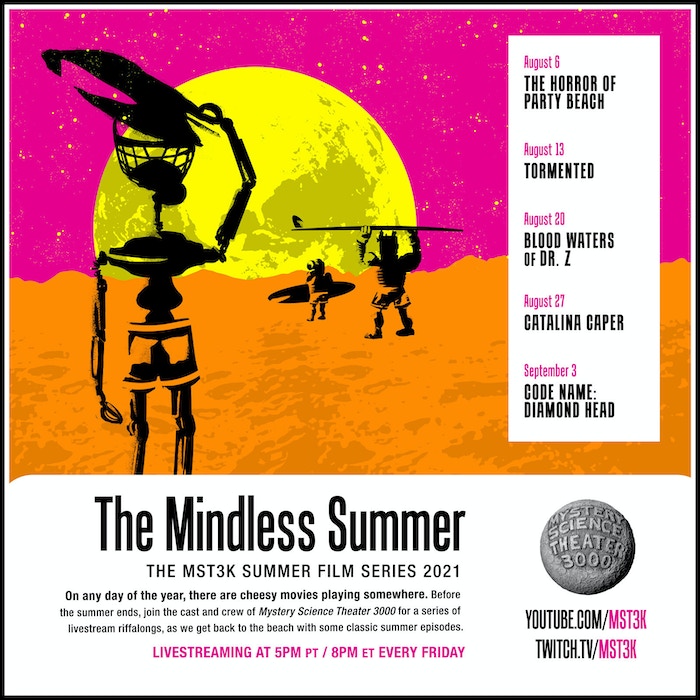 The Horror of Party Beach was my first.
Top

Got this in an e-mail:

Did you miss any of The Mads' livestreams that began in 2020? You're in luck! Every third Saturday at 10pm ET we'll be rebroadcasting each of the livestreams, starting with The Mads: Glen or Glenda this Saturday at 10pm ET! You can download the entire show instantly by buying a ticket NOW. We will not be selling downloads of this show after August 21, 2021.

Not sure why they've decided to go with this artifical-scarcity route instead of just leaving it up to download in perpetuity, but there it is.

I watched it last year and liked it. As for the content, I'll caution that it's the extended cut of the film with the weird, long, rapey fever-dream sequence. And of course while the movie is remarkably progressive and sensitive for the 1950s, the phrase "for the 1950s" is doing a lot of heavy lifting there.

I'll also add that I felt like, while Trace and Frank made fun of the movie's shoddy production values, they didn't make fun of the subject matter. I don't remember any transphobic jokes.
Top
Post Reply
297 posts