That Sean Kelly take reminded me of an existing Batman story with a very similar spin: the original Year One.

Back before Frank Miller became, well, uh, Frank Miller, he put together a story with some extremely strong socialist, and anti-authoritarian subtexts, and in several of those ways I feel like that take was better than Kelly's suggestion.

I think the main things that bug me about Kelly's proposed version is that Bruce Wayne is supposed to do more meaningful work, yes, but he's also a disguise for batman to infiltrate the upper class with in ways Batman can't (or in ways which are much easier than what Batman would have to do). Wayne Mansion as some kind of compound for the homeless is some end-of-days stuff [joke about 2020 goes here].

I'm also not a fan of robbing Jim Gordon of any agency as a person - having the superhero be the lynchpin of everyone's morality weakens the story. I recognize that he's trying to propose Gordon as a model to the silent cops of 2020, but I'm not sure how well that idea would take with Gordon's character history, and in any case, why does Gordon have to be the *only* honest cop? There are many who are silent so why not have two characters?

Year One touches on a lot of that. Batman directly and personally threatens the rich, recognizing where the roots of Gotham's problems start, while also going to a fair amount of effort to present Bruce Wayne as a dissolute playboy. Meanwhile Gordon's alone (at least to start), and he's silent - but he's not idle; he has a plan, irrespective of Batman, and carries it out as best he can, picking his fights, gathering allies and working towards a position of power (a process that has only started to bear fruit by the end of the story).

Regular cops don't feature much outside of Gordon's friend Merkel, but when Batman goes to the worst neighbourhood in town, it's the trigger-happy beat cops who shoot him, not the crooks. When we see the Gotham SWAT team - riot gear and all - they're perfectly willing to murder the poor or homeless and are pretty much straight depictions of your average real-life cop who gets off on the violence and power. After all, that was the same reality all the way back in 1988 and for decades before - all that's changed is more people are paying attention. Going back to Merkel, he'd probably be a great candidate for a cop whose silence enables the machine, but who is willing to risk himself once he knows he's not alone (this is implied in Year One, but never shown). The fact that the hero Merkel looks up to isn't Batman, but Gordon, is pretty meaningful for this IMO.

Another good Batman book that goes all-in on the theme of Bruce Wayne doing large-scale good, but on the sly, was Batman: War on Crime, which is also beautifully illustrated by Alex Ross. Wayne pretends to be interested in skeezy insider deals to bust some white-collar scum looking to gentrify a neighbourhood, but also ends up having Waynecorp buy and restore a shuttered factory that once supported the same neighbourhood in an effort to restore the foundation of the community.

Mongrel wrote:Another good Batman book that goes all-in on the theme of Bruce Wayne doing large-scale good, but on the sly, was Batman: War on Crime, which is also beautifully illustrated by Alex Ross. Wayne pretends to be interested in skeezy insider deals to bust some white-collar scum looking to gentrify a neighbourhood, but also ends up having Waynecorp buy and restore a shuttered factory that once supported the same neighbourhood, in an effort to restore the foundation of the community.

Written by Paul Dini, just to tie it back to my observation that the Batman: TAS crew got it.
Top

I am 100% on board with the notion that Batman TAS was the platonic ideal of what Batman could and should be. 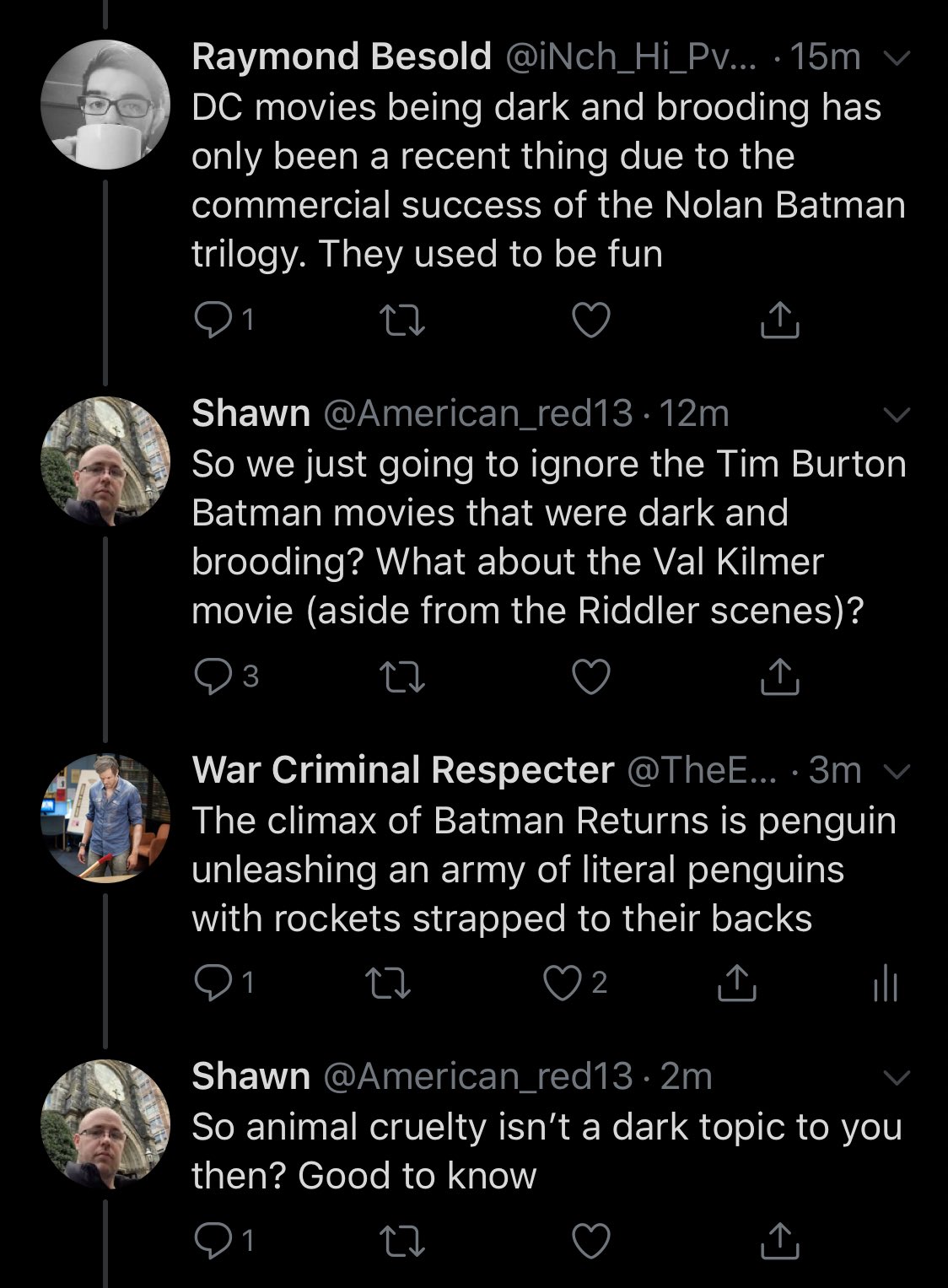 Shawn is making his point ineffectively, possibly because he is having a conversation on Twitter, but he does have a point. I do think people have a tendency to lay the grim-'n'-gritty Batman movie trend at Nolan's feet and dismiss Burton's hand in it.

But, y'know, as neon-colored and over-the-top as Burton's movies are, they were pretty dark. Suicide penguins? Yeah, that's fucking funny, but it's pretty black humor. I think it's easy to forget people throwing around terms like "gritty realism" back then in the Burton era, in comparison to subsequent movies, but the main cultural touchstone for Batman before 1989 was still the '66 TV series.

There are a lot of moments you can trace Batman's grim-'n'-gritty modern portrayal to. Englehart and Rogers. O'Neil and Adams. Frank Miller may be the most important name of all. But Burton? He absolutely goes on the list.

Whether Burton or Nolan is a more important step in that evolution in Batman's popular portrayal is kind of a Zen thing, like "how many babies fit in a tire?" you know, the old joke. I'm inclined to say Burton just because he got there first, though Nolan's take is more what people think of when they think of the definitive dark Batman take now. Snyder's movies are a different thing again but they look more like Nolan than Burton, and if the trailer's anything to go by it looks reasonable to say the same of Reeves's take.

I think really what the Burton movies show us is that "dark and brooding" vs. "fun" is a false choice. You can make a Batman movie that's both. Bruce makes a somber pilgrimage to lay flowers on the spot where his parents were murdered, then the Joker shows up and murders somebody with a comically-oversized quill pen. You know, fun.
Top

Batman at his worst represents what every Chud wants; to kill and beat people they don't like into long term disability.

Batman at his best represents what everyone else wants; a benevolent socialist who attempts to make the worst a better place but isn't above punching when punching is called for. And also fun gadgets and jokes.

Friday wrote:The fact that fun gadgets have given way entirely to "superarmored riot gear and machinegun motorbikes" is a sign that the Chuds are winning the fight for Batman's soul.

It's also yet another sign that everybody took the wrong message from The Dark Knight Returns.

The tank in TDKR is ridiculous.

Once again, Batman: TAS gets it. They juxtaposed TDKR with a Finger/Sprang story where the Joker ties Batman and Robin to oversized musical instruments. Because they understood that those things are equally ridiculous.

I think Frank Miller understood that too, back in 1986. I'm not sure he does now.

TDKR is satire. It's intentionally over-the-top. It's Frank Miller taking the absurdity of the '66 TV series and twisting it hard in the opposite direction. (Which is much the same thing Burton would do a few years later.) It's not a coincidence that when they were looking for somebody to write the sequel to Robocop, he's the guy they went to.

And, as muddled as its politics are, it's also pretty fucking explicitly anti-fascist. HINT: President Reagan and Superman are not the good guys in this story.
Top

Oh and one other thing I just remembered about Year One (looks like it's time to read it again!):

Gordon is being hired by GCPD in the first place because he was fired from another PD for speaking out against corruption (Gotham being an analogy for cities like Detroit in this particular way, as a sort of last stop for the desperate). Commissioner Leob's mistake is in thinking that Gordon has learned to play ball after this experience, since, well, that would be true for an ordinary cop: You tried to be a goody two-shoes, you tried to stand against your brothers. How did that work out for you eh?

Gordon learned from that, just... not what an ordinary man would have learned. Because he's a hero. 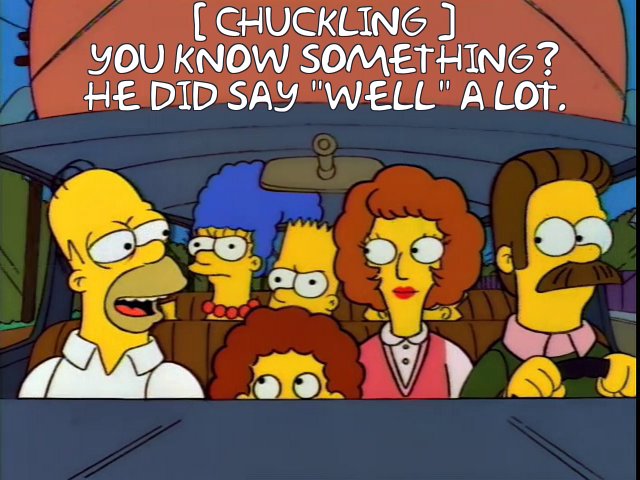 Nah, not directed at you; the Reagan dialogue in the DKR page I posted just reminded me of it.
Top

Mongrel wrote:Gordon is being hired by GCPD in the first place because he was fired from another PD for speaking out against corruption ... Commissioner Leob's mistake is in thinking that Gordon has learned to play ball after this experience,

Mongrel wrote:Year One (looks like it's time to read it again!)

Did that today and got a chuckle out of the accidentally serendipitous comedy of Gordon's introductory description of the GCPD swat team:

"Last month Branden and his swat team calmed down a riot in Robinson Park. Didn't even leave the statues standing."