When I became a man I put away childish things, including the fear of childishness and the desire to be very grown up. - C.S. Lewis.
Top

I have often thought about what the Arkham and Spider-Man games might be like if they'd decided to make them look like comic books instead of balls.

It appears somebody else had the same idea.

i really want them to revisit the Ultimate Spider-man game they did following up on the success of Spider-Man 2 back in the day, but with Spider-Verse building on the Sony Spider games. more cel-shaded open worlds please.

I remember briefly playing a couple of the movie Spider-Man games, but before the 2018 game the last one I spent any real time on was the Dreamcast one. (Never did finish it. Given that I finally finished Shenmue a week and a half ago, maybe it's time I went back and finished some other Dreamcast games.) I heard good things about Shattered Dimensions.

But yeah, I took a quick glance at USM and like what I see. Here's hoping the Hellboy game is good and then there are more games like it.
Top

You can always check out West of Dead, the company's previous game that is clearly their audition for a Hellboy game. It even stars Ron Perlman. Mostly positive reviews on Steam

I do plan to finish that sucker eventually, but we'll see if they get this shit fixed or if I end up just sticking with the previous version.
Top

My nephew's gotten into RDR2, and his younger sister was asking me what a good game was that was like that but more age-appropriate for her.

I'm totally going to get her a copy of Horizon Zero Dawn in a year or two but I think it might be a little much for her right now, in terms of content. I suggested Breath of the Wild; she said she tried it and didn't like it (I think the breakable weapons may have put her off it).

I said I've heard good things about Supraland, and then I went and picked up a used copy of the Switch version of Immortals: Fenyx Rising at the local used game emporium, because it seems like a good fit for her but I don't want to give Ubisoft my money.

I played the first 45 minutes, and my first impression is ick, this is a fucking console game that requires a fucking Ubisoft Connect login. I am not at all happy about that, but I signed up for an account and fired it up.

It's a little rough. It's quite clearly not designed for Switch specs. The framerate is really inconsistent but I didn't actually have any trouble with the gameplay because of it, which I suppose is a pretty significant achievement in itself. Also the menu is clearly designed for a mouse and they didn't bother fixing it so you can navigate it with directional buttons; you have to fucking move a mouse pointer with a joystick, which is kind of amazing in how half-assed it is.

Some very rough edges notwithstanding, I enjoyed the hell out of the portion of the game I played. It's ripping off BotW hard, but that's not really a complaint; if you're going to steal, steal from the best. I think it does a decent job squaring the circle of taking BotW-like gameplay (and graphical style) but making the early going a little clearer and better-guided, which I think is a good fit for a kid who's just dipping her toe into this kind of open-world adventure game and bounced off Zelda when she tried it.

The writing is great; the framing device is that Prometheus is narrating the story to Zeus and the two of them keep bantering about it. It's full of fun little asides and references to Greek mythology ("Who's out there?" - "No one." - "I'm not going to fall for that old trick!").

Anyway. I liked what I played a lot, and I hope she'll like it too. It seems like a great game; it's too bad Ubisoft's such a rotten company.
Top

It's only a short little experience, but there's always A Short Hike.
tiny text
Top

Hm, not a bad idea; I keep meaning to give that one a shot myself.
Top

At least they're unlocking the Stadia controller so it won't just be bricked by the service shutting down.
Top

Technically it was already usable wired as a generic controller, but this is a good improvement. 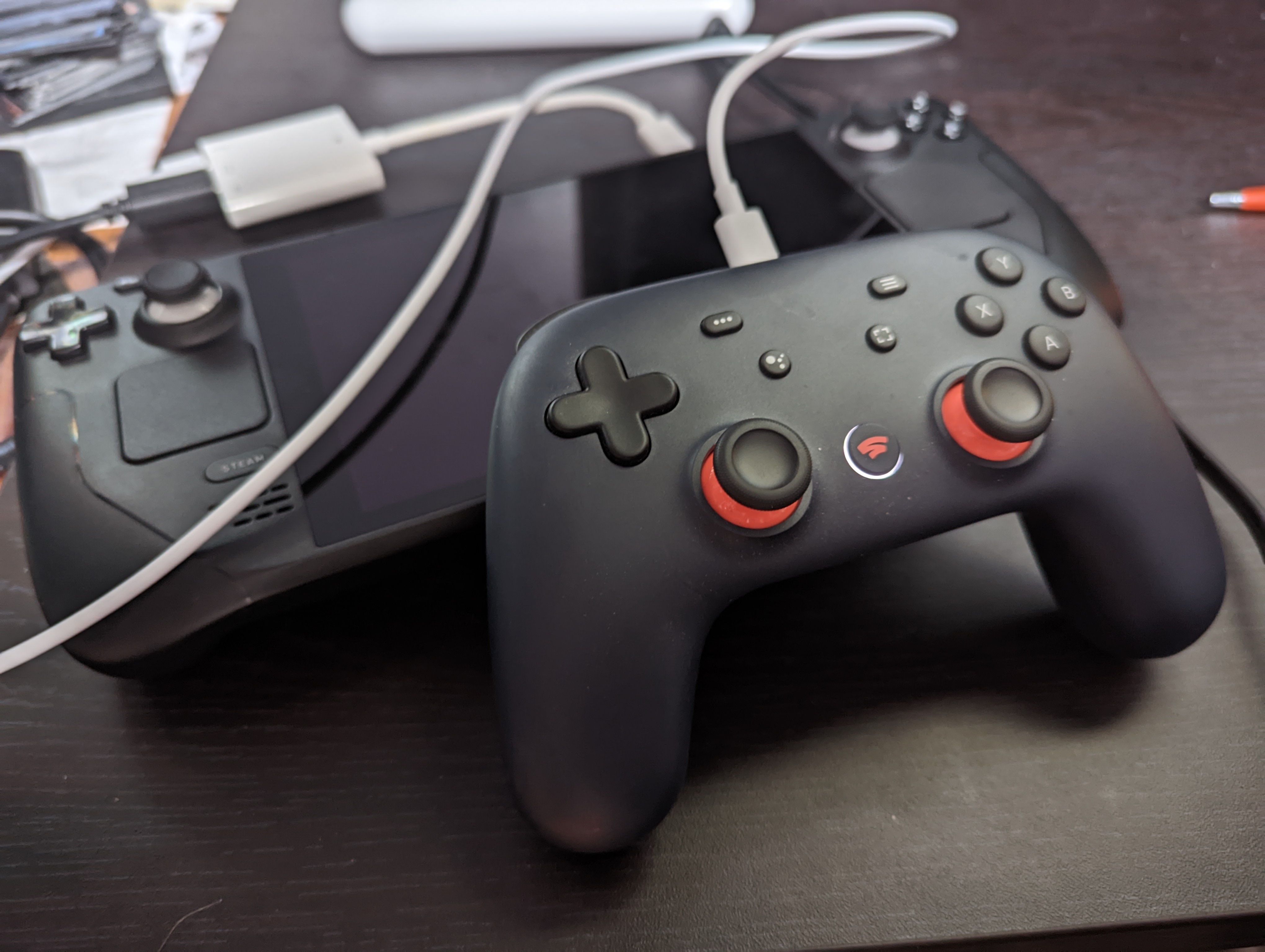 Thad wrote:I went and picked up a used copy of the Switch version of Immortals: Fenyx Rising at the local used game emporium, because it seems like a good fit for [my niece] but I don't want to give Ubisoft my money.

I played the first 45 minutes, and my first impression is ick, this is a fucking console game that requires a fucking Ubisoft Connect login. I am not at all happy about that, but I signed up for an account and fired it up.

It seems like a great game; it's too bad Ubisoft's such a rotten company.

Having to sign up for an Ubisoft account to play a console game is still bullshit, but I have to admit that starting a game on Switch, saving to the cloud, and then resuming my save on PS4 is pretty cool.
Top

Why do developers and publishers keep forcing these absolutely useless third-party launchers on us? Never once have I, or anyone I've spoken to, actually wanted them. They only ever cause problems and solve basically nothing that Steam cannot already do directly.

Publisher-specific launchers are an annoyance on Windows, but they can straight up break shit on Linux. EA's done it, Rockstar's done it, even CDProjekt's done it.

And I know that, historically, publishers DGAF about Linux gamers, but...y'know, given the success of the Steam Deck, maybe they could put a little more thought into not breaking compatibility for the sake of those launchers nobody fucking likes anyway? Not that I'm gonna hold my breath for EA and Ubisoft to be less hostile toward their customers, but y'know, maybe some of the less-openly-evil publishers will start to take the fucking hint.
Top

The Adams brothers, creators of Dwarf Fortress, finally got their big payday with the game finally seeing an actual commercial release (on Steam), and honestly this is the nicest I've felt about a game developer in a long time. (via ars)

The appreciation you give us is part of our being now. It carries us in the cars we drive. It sustains us as the food that we eat. There is now no longer any existence except the one that you have provided. When we pass from this world, you will be the reason we are remembered.