Having a regular playgroup is one thing, but talking about what kind of game you want is probably the #1 best way to get a decent game of Commander (or any tabletop game with that level of granularity) going. How long do you want the game to go? What does your deck do? How does your deck win? What turn does it win on? etc. If everyone is on the same page as to what they want out of the game, there's more enjoyment to go around.

I'm on a few Discords that do Spelltable games, and having a pregame discussion is crucial to taking the temperature of everyone's desires for the game. The place I've found the most fun is Kristen Gregory's server (she's a member of the Commander Advisory Group and writes a lot of articles for CardKingdom - I think she also writes for Tolarian Community College, too?). It's a really nice place, and I don't feel like I have to keep up with some sort of EDH Arms Race and punch up my decks because I keep getting left in the dust every game (which has happened on other servers). If you're open about what your deck can do and what you want to do with it in the game, it can mitigate these issues.

If you're in a group that doesn't have a pregame discussion, you run the risk of someone, if not everyone, having a bad time. We've also found that a postgame discussion can help too. It gives you an opportunity to hear what the other players felt, and if they have any feedback for you that you might want to (or need to) hear about your build or play style. Commander is supposed to be a social format, and if you're just treating it like a Pro Tour Qualifier and not an occasion to be social, you're kind of missing the point.


This isn't so much about the tweet as is the fact that most of the replies are basically "Soooo... just like normal Magic cards?"

Top, the only card banned not for power, but because holy goddamn fucking shit.

Friday wrote:Top, the only card banned not for power, but because holy goddamn fucking shit.

I guess Scheherazade counts for that too.

Seems that MtG artist Seb McKinnon pulled a Terese Nielsen and posted on his Instagram his support for the antivaxx trucker protest in Ottawa, along with a photo of himself there.

So, if anyone's got an artist that they hate, I can buy a couple of their playmats and then they'll do something to make themselves persona non grata. I replaced my Noah Bradley playmat with Seb McKinnon playmats.
Top

You are dead. Dead, dead. 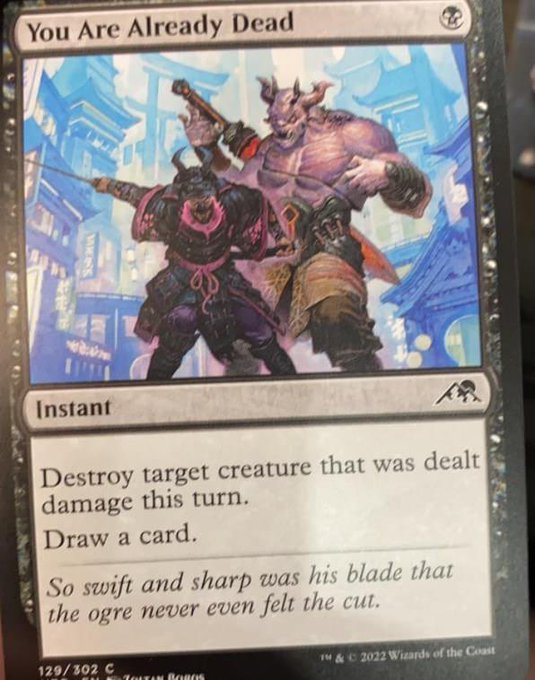 (it's hilarious that this card exists, but the sheer redundancy of the flavour text is infuriating)

Man, a few cards aside, this set is looking just SO BAD.

From a flavour point of view, it's becoming clear that they couldn't figure out whether to stay with fantasy Shinto Japan or to fully embrace the switch to cyberpunk Kamigawa so they kind of tried to have it both ways and just ended up feeling like incoherent shit.

Wizards explicitly said that their thought process was that originally it was going to be new cyberpunk Japan plane, but then they realized it'd be good to have conflict between traditional Kamigawa and modern themes so they made it a Kamigawa set. But the cyberpunk half is horseshit. Consider the fact that Kaladesh feels more cyberpunk than this set does and it was purely steampunk.

But whatever, right? Not the first time Wizards has totally duffed it on flavour.

But mechanically it feels like trash too. So many of these cards have SO MUCH UNNECESSARY TEXT, it feels like a goddamned roborosewater set. 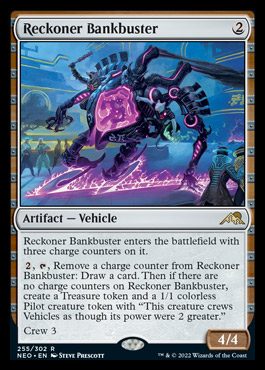 What kind of bank is being busted? Is it even a bank robbery at all or do they mean 'bankbuster' like it's destroying the rails at local skate parks with sick-ass ollies? Why does it take three turns to do its thing? Is the reward the treasure or the card draw? Why is the card slow to operate but the art shows something moving fast? Is it actually a racer and the 3 turns are laps and then you win the race? Why is it a "Reckoner"? Why not just call it The Bankbuster... do they need to keep their options open for an entire series or cycle of Bankbuster cards??? Is "Reckoner" some clan/gang/vehicle type from the fiction? If so, how the fuck would you even gather that from the cards? Why is the pilot not just a goddamn 3/1 if you have to wait 3 turns and pay 6 mana to get him anyway? What exactly is the vehicle supposed to be DOING when it has no pilot and is doing that engine stuff? What is the charges being depleted even meant to represent? Is it like a fuchikoma so it's doing stuff on it's own but a pilot can still get in it later? I still don't know if it's pulling off a heist or just doing wicked drifts?

I can grok the underlying mechanical concept that it's a little engine that gets you some stuff and then turns into a creature to bash with, but like, seriously, what the fuck is this shit?

Mongrel wrote:What exactly is the vehicle supposed to be DOING when it has no pilot and is doing that engine stuff? What is the charges being depleted even meant to represent? Is it like a fuchikoma so it's doing stuff on it's own but a pilot can still get in it later? I still don't know if it's pulling off a heist or just doing wicked drifts?

I can grok the underlying mechanical concept that it's a little engine that gets you some stuff and then turns into a creature to bash with, but like, seriously, what the fuck is this shit?

I have to imagine that the charge counters represent how long it needs to charge before it can bust a bank. Since it can be used from the start if you have a creature crew it, but it only gives treasure if you've charged it fully. The card draw is to make paying the mana to "charge" not just be a drain, and getting the pilot is an added bonus, allowing you to get pilots for other vehicles. Flavor it as you're training pilots in the time when it's charging.
It feels flavorful and fitting to me even if all I would know about it is that it's from something called "Kamigawa: Neon Dynasty".
Top