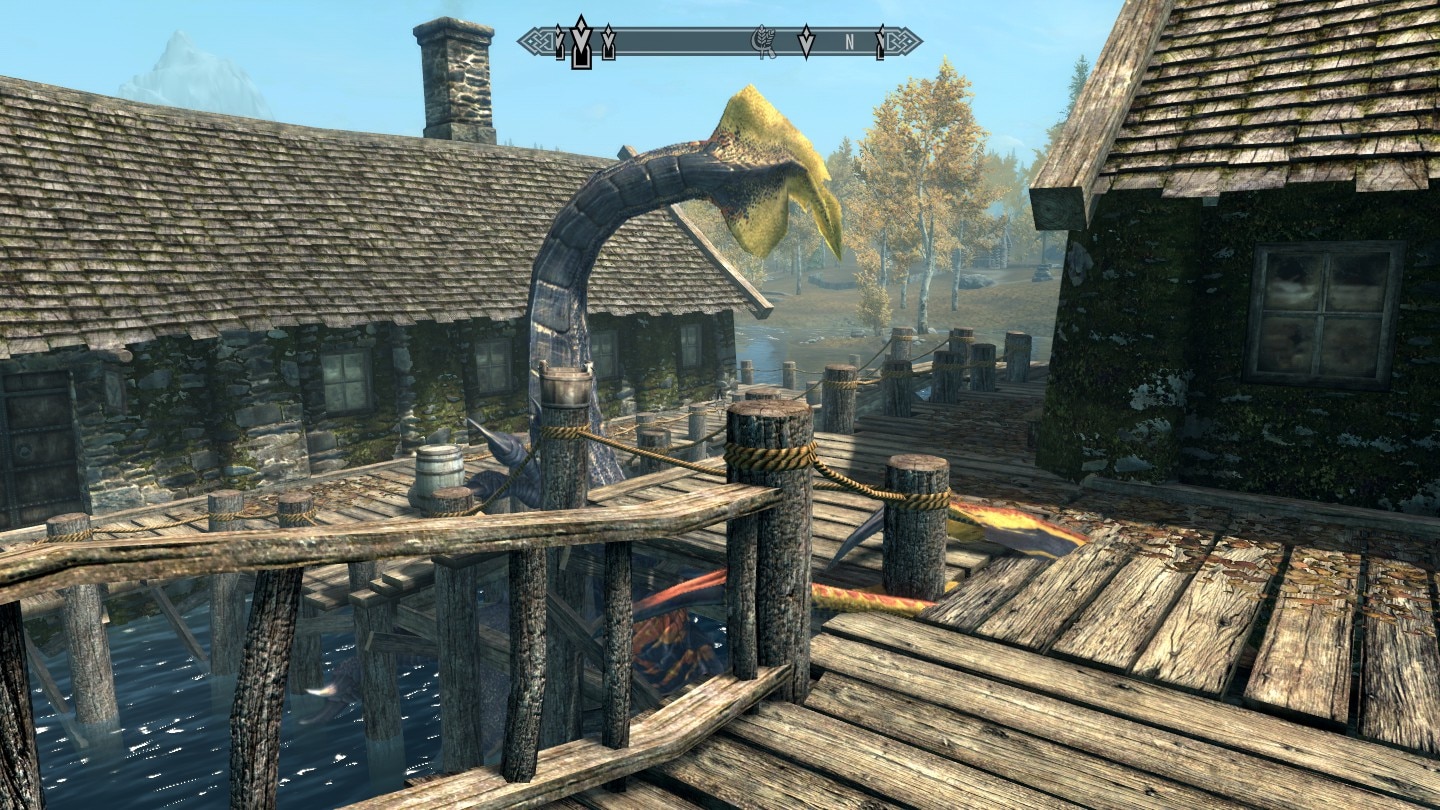 I was really excited for Rune Factory when it first came out, but in practice it was a low-rent Harvest Moon with bad combat added on the side.

I finally came back to the series with Rune Factory 5. It's still a pretty bare-bones Harvest Moon, but now that's the wrapping on the Dark Cloud-esque dungeon crawler that makes up the story and most of the content. However, a pretty basic comprehension of both genres was enough to let me have a mostly self-sufficient farm while beating a final boss that can't damage me and goes down in 5 hits on the highest difficulty before the end of spring year 1. Now I'm having a hard time motivating myself to keep playing just to unlock achievements and finish an NPC relationship.

As I was looking into stuff for RF5 (the tutorialization really sucks, even with guides I was discovering main features 20 hours in) I kept hearing that the PC port of Rune Factory 4 is the high point of the series and RF5 is generally seen as a disappointment. So I guess I know where I'm going next.

Turning in quests like
"Hey I took out the Severin family and a bunch of their assassins, no worries here on out. I'm actually the leader of the Dark Brotherhood back in Skyrim, so everything worked out great."
"Oh, nice."
"I also stole everything in their house that wasn't nailed down, because I'm also the head of the Thieves Guild out of Riften."
"...oh... okay..."
"I got all their souls right here in these Black Gems, if you want 'em. I've got some enchanting to do--"
"Let me guess, because you're the Archmage of the College of Winterhold, too?"
"Strains disbelief, doesn't it?"
Top

nosimpleway wrote:If I were going for that I'd want to forge the Godfucker as, like, a table fork

Edit: A better idea, that weapon is clearly THE END TINES
Top

If the target dies in the next 25 and a half years, you get to keep their soul.
Top

Though I assume anything that can shrug off two billion points of life drain probably won't die, ever
Top

I have found two examples of the game effectively countering a player who has made a bunch of Godfucker equipment.

The first is the boss of one of the DLC packs. When he gets to around 1/4 of his max HP, he goes into an ethereal form where he can't be hurt, summons a dragon, and eats it to restore the 3/4 of his HP that's missing. Once his HP is full again, he resumes his attack. His HP is floored at 1 until he's done this three or four times, so you can't oneshot him. A Godfucker will take him down to 1 HP, he goes invincible, restores 3/4 of his HP, and then doesn't ever come out of ethereal form because he's not up to his HP maximum yet. The game's a softlock and you have to start the fight over again.
In this case I happened to have a maul that I hadn't honed to triple-digit attack power, going off my two-handed weapon skill that I've mostly ignored the whole game. I could chip him down that way while all his spells bounced off my 100000% magic resist.

The other is what I understand to be an optional superboss that shows up when you get to what used to be the level cap. You're approached by a man in black armor who claims that he's already seen everything and done everything, and wants to die in honorable combat but he keeps killing everything he fights, so it's the stupid loser afterlife for him instead of glorious Sovngarde. There's not a button to point out that there are plenty of infinitely-repeating quests for every Jarl and every joinable faction in the game, and in fact my own quest list is almost entirely those repeatable quests (and a couple of bugged ones that won't clear from my quest list even though they're done). So he challenges you to a duel and fucks off to the edge of the map where you won't find him by accident.

He doesn't initiate the duel when you track him down, though. He waits for you to swing first. I swung first. I died instantly. That can't be right? Reload from save. It happened again. Weirdest bug I've seen yet, and a lot less funny than most.

So I looked it up. Unlike anything else I've seen in the game, he has damage reflection. When he's hit with a weapon he automatically does to you the amount of damage dealt to him. With a regular weapon it's just an extra challenge to an intentionally hard-as-balls fight, but since I can oneshot him, he reflects the damage and oneshots me right back. And since it's direct HP reduction it doesn't have to go through all the cool armor I'm wearing, meaning it's the first thing I've seen in a while that can actually harm me.

So I stabbed him with a fork.

Either THE END TINES does exactly one damage that's reflectable and the other two billion don't count, or he reflected two billion damage to me that got negated by the fact that I did two billion of health drain to him, and the game didn't notice my health shot down into seven-digit negatives before it was refilled to full.

"At last... Sovngarde..." he gasps as he dies. I didn't have the heart, or the time, to tell him that because I'd had to kill him with THE END TINES and he didn't wait the full twenty-six years afterward his soul was not going to the glorious afterlife, instead sucked into a gem and thrown into a pile of fifty-plus others just like it in case I wanted to enchant something later. Oh well. I'm sure he'll figure it out.

(I'm pretty sure The Lore is that the glorious afterlife in Sovngarde is only for Nords, anyway. This guy was a Redguard, not a Nord, so I don't know what would have happened to him in the afterlife anyway. But considering that with all the sidequests I've done something like five or six different Daedra have a claim to my soul, I'm not really sure what's going to happen to me, either.)
Top

The Ebony Warrior is by far one of the weirdest things about the game. As you might expect, like M'aiq, he's a sort of not-recurring recurring character.

Skyrim's version has led to sometimes humorous sometimes intense speculation for over a decade as to what exactly the dude's deal is supposed to be. I think EpicNate had the best take on it with some funny detective work, but it's Elder Scrolls, so basically whatever you what to be canon, is.

Speaking of M'aiq, I'm curious. There's a series of characters who players invariably do things to. What did you do to untimely accidents, if any, befell:

I have to look up who most of those people are.
Nazeem: Haven't done anything to him.
Heimskr: oh is that his name? I haven't done anything to him. Because the elf-Nazis want to make it illegal to talk about the thing he shouts about, constantly, in a public place. And if he's going to thumb his nose at the elf-Nazis I'm going to let him do it.
Aerin: He's fine. I mean, he follows and supports someone who has noticed that the place he lives is kind of a shithole and wants to do something about it, which is more than I can say for most of the people in Skyrim.
Cicero: Quest-related kill, as part of my ascent to the top of the Dark Brotherhood. I figured sparing him is possible but I'm not sure why I'd want to, so I just stabbed him. His clothes adorn a mannequin in the basement of my house.
Maven: Haven't done anything to her. I figured the plot would get around to it sooner or later.

If there were a way to inconvenience people short of murdering them I might have lashed out, but the game's not that complex. And if there's any group that is going to suffer my wrath, first and worst, it's the entire population of Markath. If being a smug jerk were a death penalty in Skyrim I'd be the first with my head on the chopping block.

...wait, is being a smug jerk a death penalty in Skyrim? Is that why I had my head on the chopping block in the cold open? Hmm. "My ancestors are smiling at me, Imperial. And they're being really condescending."
Top

I like keeping Heimskr around too, but it's always impressive when someone's managed to not kick Nazeem in the junk.

Skyrim's... fine, I guess. I didn't find it entertaining enough to play it through again, modded or not. The whole time I'm just sort of scratching my head going "This is the game that got memed to hell and back for the last decade? Huh. Okay." The bugs and exploits were more fun than the core game itself, which I guess is the answer.

I booted up Fallout 3, that I bought on the same sale, and found that they've really streamlined the process for the game bugging out and crashing: it doesn't even launch.
Top

Skyrim being a meme is not because it's so good and fun. Morrowind holds up as the craziest setting and characters, and the last game without obligatory markers for every quest objective. It also has a skill system with about 3x the density of skyrim, complete with attack rolls.

Oblivion is the meme king for have the insane catalogue of NPC dialogue. It's a fun middle-child to morrowind and skyrim.

When it comes to 3d Fallouts: New Vegas is far-and-away the best for main story, side quests, companions, and skill uses / dialogue choices.

I keep meaning to check out Morrowind.

With OpenMW, of course.
Top

Skyrim exists as basically the strongest modding platform for an open-world fantasy game, a title it has somehow held onto for over a decade. In fact, lately there's been one of the periodic waves of strong coders unlocking fundamental functions once thought unmoddable and a slew of new mods resulting from that (specifically, big jumps in fine combat mechanics with real collision, dynamic animation replacement, and animated traversal of objects other than just walking or jumping, i.e. crawling over or under terrain in dungeons, negotiating tight passages sideways, etc.).

I got Falliut 3 to work after Steam's response to it not working could be summed up with a single upraised finger.

As I escaped Vault 101 in the intro, my childhood friend who woke me up and told me to escape in the first place met me at the Vault door, as promised. She whipped out a gun and shot me in the face.

It's not a scripted betrayal, she just got flagged hostile for some (or no particular) reason. On a reload she was all bittersweet congratulations.

So I'm sure there will be more Shenanigans to post here as I play through.
Top

nosimpleway wrote:She whipped out a gun and shot me in the face.

Walking along, exploring some burned-out ruined buildings, scrounging for anything that might help this money-spiral I find myself in early on.

A shot rings out. I keel over and die instantly. No indication there was anyone around, much less a crack shot with a sniper rifle.

So, uh, mental note. Sometimes in Fallout 3 you can just be walking along and then die.
Top
Post Reply
909 posts