I played the version before this one and it runs really well, but it will also kick your ass super-duper hard. Unfortunately it still has a similar difficulty curve to vanilla in that you start out pretty evenly matched, then right around crafting the key for the underground base every mission is really hard then once you get your techs things get pretty easy.

The big change though is that there will be random missions mixed in and there's a relative difficulty level based on mission type. So in early game if you don't pay attention to rankings you can end up against cyberdiscs and mechtoids, or trying to chase a UFO that nothing you have stands a chance against. Through mid game you could still get scout ships that only have a handful of sectoids and thin men though.

Be prepared to retreat from some missions when you see exactly what you're up against and don't even try a terror mission until your whole squad has lasers are my two pieces of advice.

beatbandito wrote:once you get your techs things get pretty easy.

bleh, that's the part where I always get bored and quit
pisa katto

There's a point right around when you clear out Exalt that the game is basically won.

The only major challenge are sectopods, which, on ironman, are fucking impossible.
tumblr | twitter | wingnut circus | youtube

In related news, my XCom LP is going to be picking back up now that I have time. I just need to upload the screens and write swears everywhere.
tumblr | twitter | wingnut circus | youtube

I am somewhat glad and also somewhat sad that everyone seems to recognize that Terror from the Deep was dumb.
Top

Classic wrote:Terror from the Deep was dumb.

The real problem with that game was just how much of a drag it became.

There were parts of TFTD that were cool.

Occasionally you'd get a UFO landing mission where the alien sub had put itself down in the middle of a whole host of ancient underwater pyramids. No explanation given as to what they were, or if the aliens were involved, or what, it was just another environment. PROBABLY a hastily thrown-together excuse to use the martian Cydonia tileset again, but still. It was cool. 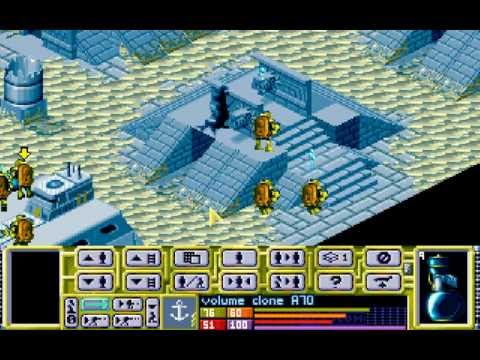 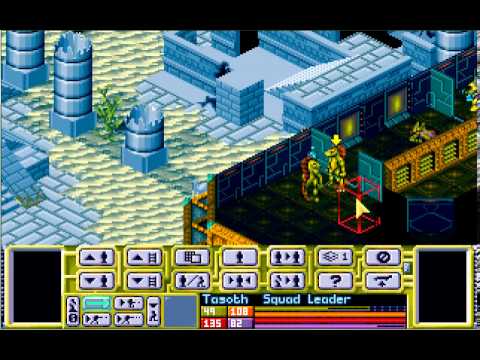 There were also a set of weird alien base variants that were supposedly long-abandoned installations from a race unrelated to the invaders, or at least, the modern ones. They were visually distinct from the usual alien base build, and nobody really seemed to know what they were. Both environments were just kinda cool and creepy. As much as TFTD was a slapped-together shitshow, it had its own feel, and I liked that.

Plus, the ultimate villain was fuckin' Cthulhu:

Course, I only ever played it after heavily modding it with XComUtil and whatnot, cutting out the mind control BS and the invincible Lobstermen. Also I think I undid the 3-part oil tanker missions. The game definitely became worlds more bearable after that.
tumblr | twitter | wingnut circus | youtube

TFTD was brought down by how it was designed to be way harder than the original just because of a bug. So you have shit like the 2 and 3 part missions all over the place, lobstermen, and all of the horrible weapons. And then there were even more fucking bugs because they didn't fucking fix the ones that were still in the engine, so you still had the difficulty bug (not that beginner was going to help, the whole game was designed to crush your balls) and the bug where if too many items were in the map, your dudes would just not have their shit in the next part of the mission.

In theory it would be a rad game, but it was made to be shit.
Top

HEY GUESS WHAT TERROR MISSION'S HAPPENING OH YOU ONLY CAN USE THE HARPOON GUNS ON THE SURFACE GET FUCKED. The only option you really had was to get drills as fast as you can and pray you could get a live deep one so you could actually progress. If you didn't get one before the game progressed to the next wave of awful aliens you're pretty much fucked.
Top

In my experience, MicroProse always has at least one neat idea in their 90's DOS games. So I'd kind of assumed that TftD had at least one.

This looks like a blending of the setting concepts between the Aftermath "spinoff" and Apocalypse. Both of which I also never owned and really sank my teeth into.
Top

There is an enemy that was a tiny UFO with a brain. It could fly anywhere, cross entire rooms, kill anyone in one hit from seemingly any distance, and it had no 'forward facing' position. It faced all directions all the time, and would instantly reaction-shot kill you if you missed.

If you managed to hit it and kill it, it detonated in a 7x7 square tile explosion, killing anyone within the blast instantly.

Those fuckers were just there to get you ready for the REAL assfucking you'd get once the floating mind-control brains showed up. They didn't even have to move to wipe out your team.

TFTD is pretty much impossible to enjoy unless you use XComUtil to fix the insane number of broken features and exploits, and cut out the insufferable oil-tanker terror missions.
tumblr | twitter | wingnut circus | youtube

So, someone out there actually got their hands on the Beta build for the long-cancelled X-Com: Alliance. It was supposedly a Rainbow Six-style tactical shooter set in the X-Com universe, whose major gimmick was your ability to see through the eyes of your team at all times. I don't think you were ever able to control them, oddly enough.

I mean, I know it's a Beta and all, but holy shit. Thank god it got canned.
tumblr | twitter | wingnut circus | youtube

I should note that this game, and Master of Orion 3, were the titles I fucking drooled over for months and months until their cancellation/abysmal release. Every screenshot I could get, every interview or forum rumor or shred of information I could find.

Watching this, I feel like there's a part of me that can rest a little easier knowing it was kindly put out of its misery by some doughy middle-manager at Hasbro.
tumblr | twitter | wingnut circus | youtube

Okay, finally fiiinally got my RMA finished on the broken video card AMD sent me. It now works, meaning I can at long last play XCom 2. Thank christ:

Mothra wrote:So, someone out there actually got their hands on the Beta build for the long-cancelled X-Com: Alliance. It was supposedly a Rainbow Six-style tactical shooter set in the X-Com universe, whose major gimmick was your ability to see through the eyes of your team at all times. I don't think you were ever able to control them, oddly enough.

If it's just art, a game can radically change look in the final art passes.
http://zarat.us
Top

zaratustra wrote:If it's just art, a game can radically change look in the final art passes.

Yep, it's clearly a very early build, probably meant to show investors or whatever.

The fact that it looks like a noticeable step down from Rainbow Six 1 in terms of gameplay is not promising. I get the feeling they wanted to make an actioney half-life style shooter, but also wanted to maintain the sparse dread of early X-Com, so they ended up with massive, empty, poorly-lit, enclosed grey corridors dotted with one-hit-kill Sectoids. More than likely, the central gimmick of being able to switch between AI teammates wouldn't have saved it.

Anyways, after Hasbro canned the team, the assets for this went into X-Com: Enforcer, the final nail in the ol' X-Coffin:

Oh hey. If I'd remembered this was down here I'd have put all my XCOM posts here instead of the general game-you're-playing thread.
Top

Finished XCom 2 a few days ago, I loved it to death. Enjoyed the final mission much more than XCom's.

Overall, it's easily my favorite in the series, my only regret being that they can't use this same desperate premise for another game. I could not get enough of the setting and the style of the resistance, fleeing from UFO patrols and carrying out terror bombing missions to roll back the Avatar timer (which was a delicious reversal). Actually being shot down by ETs and having to defend the Avenger was one of my favorite moments in the game, since the longer you wait, the closer you come to being completely overwhelmed.

Beyond that, everything relating to the lone remaining council member was badass (particularly his last transmission), I loved the occasionally synthy soundtrack, and every new alien addition they worked in was just fantastic. I love shit like this: A methane-filled alien encounter suit which, once shattered, lumbers toward you in mindless robotic automation, spilling toxic liquid everywhere as the limp body of its pilot flops about.

Liked the Sectopod redesign a lot too: There is absolutely nothing more cathartic that hacking one of these things and turning it against its buddies: Here's an unrelated image of my sniper getting clubbed by an Archon: Near the end, I started focusing a lot more on psi training, and the payoffs are absurd. Here's a vid of Geo's guy kamehamehaing a gatekeeper right through it's fucking impenetrable armor:

Here's a mission I did using only four psi-trained soldiers, trying to get the "win with all units of one type" achievement:

Mayybbe if I do another Ironman run, but that would be a ways off.

I could also see myself doing something for this kickass OpenXCom mod X-Piratez I saw on RPS.

Been playing the shit out of it since I finally installed it yesterday. It's really good. DOES take some getting used to re: the pirate speak and some of the awkward anime pics they used for research screens.

It's all about looting the corpses of whatever you manage to kill, especially early on. You'll regularly get some kind of better assault rifle or laser gun, with about one or two extra clips of ammo. It makes it so your team always has a huge range of projectile, laser, plasma, and melee weapons, due to the scarcity of ammo and the variety of firearms.

One of my pirate gals is only strong enough to carry a sledge hammer, so she just hides around corners and slugs em over the head when they pass. Another one pulled a laser rig off the blue officer from Wolfenstein (I think he was a commanding officer of one of the militant groups?), which she's been scoring kills with left and right.

Slashing weapons like the cutlass seem to miss all the fucking time, so I wouldn't recommend them. That said, there's piercing damage from bullets, there's cutting damage, there's blunt damage, and so on, with certain enemy units and factions being better guarded against one type than others. Like, one group is decked out in anti-explosive armor, meaning you need to use piercing or slash damage.

So yeah, it's fascinating. Beyond the scavanger element, I adore how many different factions there are, and how they each fight each other during certain missions. Gives me a bit of an X-Com Apocalypse vibe in that way.
tumblr | twitter | wingnut circus | youtube