Say bro, what about a thread for like, sports?

So who all is watching the World Cup? While I have no interest in futbol normally, I find it interesting partially for the properly global nature of it - what other tournament really comes close? I'd say it beats the Olympics handily. So a lot of fancy words for one of those "I only watch during the playoffs" fans.

A few interesting upsets so far as well as some terrible reffing (a lot of grabbing and tripping seems to be getting a free pass), but deathly-boring defensive strategies seem to be on the wane and there seems to be a great deal less diving (I said less, not none), so the games have actually been very watchable for their own sake!

Plus it's really fun to see the oddball matches that come up sometimes, when two countries who barely bother with relations normally are thrown into direct conflict. How often do you see an all-in fight betwee say, Cameroon and Croatia? Or Greece and Columbia? Argentina and Iran?

I was wondering why you posted this topic in the Politics section and then I remembered just how politicized the World Cup, and most sport events, is/are.

I just posted it here, because our old sports thread was in the same section; presuambly because sports is still a part of "the news".

Mods you can move it if you think it would be better in Our Facebook or whatever.

Detroit teams will continue to relentlessly disappoint me in every sport I care about.

Pretty sure the Red Wings have to at least win sometimes. They're like... the most functional institution in Detroit (though they're in rebuild mode at the moment).

I usually gamble on the world cup but I didn't this time around...
Top

It was odd finding myself rooting for Iran the other day. On the one hand, long list of human rights violations and the constant antagonism and all. On the other hand, they've played two EXCELLENT matches, way above their expected performance level. I love the World Cup.
Top

I have to root for Iran, because hurf blurf half-Persian obv.

sage kicks on all sports fields

Mongrel wrote:Pretty sure the Red Wings have to at least win sometimes. They're like... the most functional institution in Detroit (though they're in rebuild mode at the moment).

But now the Lions have Golden Tate to troll Green Bay with twice a year! (which totally fixes their awful, awful defense....)
Top

I love sportsball! Let's score all the points!
Top

Man I have a hard enough time following the sports that are built in my DNA...

Mongrel wrote:Pretty sure the Red Wings have to at least win sometimes. They're like... the most functional institution in Detroit (though they're in rebuild mode at the moment).

Unfortunately, I've yet to move past the idea that hockey is just soccer with high pain tolerance substituting for actual athleticism.

(they see me trollin')

Rico wrote:But now the Lions have Golden Tate to troll Green Bay with twice a year! (which totally fixes their awful, awful defense....)

I never got a chance to congratulate you on the most painful Super Bowl I've ever watched, even if Pete Carroll is kind of the epitome of a lot of things wrong with college AND pro football and it sticks in my craw a little bit that he's now a SB-winning coach.

I'm not gonna let myself get excited about the Lions this year. It's hard to tune out the Hype-Machine-Turned-Lamentations around here but I promised myself I wasn't going to pay attention until Week 10; historically the Lions will have completely imploded by then so I'll know Something's Happening if they're still in the running.

Mostly it's the Tigers. They are so good! So good! Maybe the best team in MLB if you look at wins over the past five years, but in the postseason they choke like David Carradine.

I get college, but why pro?
Top

...and the seahawks get mysteriously bigger

(that might be a little unfair and I'm probably noticing it based on the residual stink of the USC thing; at this point it's probably more dangerous to avoid steroid use as an NFL player)

What's that Italy? Is that the sound of the sad trombone?

This was great too: 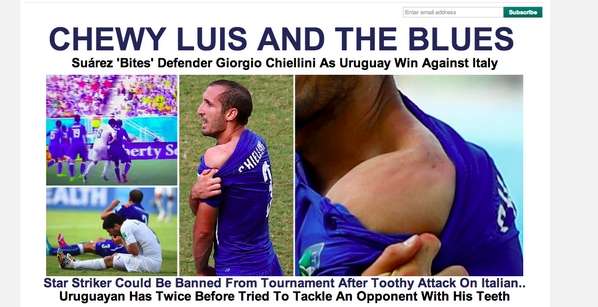 (that might be a little unfair and I'm probably noticing it based on the residual stink of the USC thing; at this point it's probably more dangerous to avoid steroid use as an NFL player)

I feel like that's more a media narrative than anything else. Most of the players were 2nd-3rd string during the ridiculous roster churn during the rebuild. there's only one person who was suspended for PEDs who was really a part of last season (OLB/DE hybrid Bruce Irvin). But like you allude to, with any team these days it's probably more about who's dumb enough to get caught more than who's actually using.
Top

Personal favorite is NBA Y2K even though I don't even know the background to make all the jokes as funny as they should be and it's still good.