So, this week has been kind of a rollercoaster if you still follow the City of Heroes community after the game shut down SIX. YEARS. AGO.

First, we find out that a private server has existed and has been running for almost that whole time. The community was not happy.

Next, stories of that server's existence, which has included former character data which was retrievable, was dropped by a Youtuber, sending the CoX memorial community into a tizzy.

Now, the guy who was running the server has released the code that was probably stolen by a Paragon Studios employee as they were cleaning out their desk and people are hard at work figuring out how to assemble this into a working server emulator.

It's an exciting time for everyone involved, and I'd like to get the band back together. Even if Tiny Activist, Captain Concussion, Inazuma Blast, Frivolous Suit, Inside-out Girl, and the CEO of Earth are lost to digital oblivion, I'm sure we can create new legends of Jerkery. If you're still interested, I made a discord server. There isn't much there yet, but when stuff gets assembled, and private servers are up and running, we can decide where to go from there.

CoH was before my time, but if it was anything like the Champions character designer only with a game attached this is super interesting news. Sucks to be any of the teams working on spiritual successors, I guess?

Anton Grande wrote:What I learned about the CoX Community: It’s been so long since I’ve played, I think I forgot what it’s like fighting next to a bunch of heroes. I have seen every type of hero over the past few days. I’ve seen messengers, leaders, coders, engineers, mods, EVERYONE step up to the plate. There hasn’t been one single talk of money, business, or exclusion at all. We’re all fighting together to get our world set up and that’s exactly what I’ve been missing.

That's just amazing. Seems like the shutdown was actually the best timeline for this community.
Top

mharr wrote:CoH was before my time, but if it was anything like the Champions character designer only with a game attached this is super interesting news. Sucks to be any of the teams working on spiritual successors, I guess?

This is a solution that's going to require a certain amount of tech savvy, and, not to put too fine a point on it, is illegal. (While the Copyright Office *did* approve a DMCA exception last year for private servers for abandoned games, it was only for archivists, not people actually playing the game -- and it certainly didn't apply to cases like this, where the server code was acquired illegally.)

This is great news for a certain type of player who has the right combination of nostalgia and technical skill. But it's not really going to compete for marketshare with legal alternatives that are officially supported by their developers.
Top

BTW, here's Memoirs of an Urban Vigilante at archive.org.
Top

So what you're saying, Thad, is I poked around the discord and got the info. I was out all day today, but early this morning I got a good run after putting all the settings to minimum.

I'm going to assume the test server is under siege right now and leave it alone until the panic dies down. Is there a torrent we can usefully seed?

Oof. Not only under siege, but in all the excitement they went live with a busted population limiter. That must have been... fun.

McDohl wrote:So what you're saying, Thad, is

The Frivolous Suit is a big fan of Devin Nunes these days, but he wants to make it very clear to everybody that he had nothing to do with Gavin McInnes's suit against the SPLC.

"I may be an incredible bastard, but I'm not a fucking Nazi," the Suit said in a statement.

beatbandito wrote:I poked around the discord and got the info. I was out all day today, but early this morning I got a good run after putting all the settings to minimum.

Oh shit, I guess I didn't grok that this was actually in a place where we could fire it up and connect to a server yet.

So is the Discord link working for everybody else? It isn't for me. I don't have an account, but I would think it would say "register for an account" instead of "invite invalid" if that were the issue.
Top

Things may have gotten sticky since those messages. Frankly it's been an incredible launch weekend for them. On Friday night when it first went live the map server and login server could barely handle the few hundred people. By Sunday night and a dozen shutdowns and upgrades, it was running smooth with last count I saw at 2700 connected (a vanilla CoH server had a pop limit of 1500 I think).

And the craziest part was that people were always happy about shutdowns, because the devs kept us well informed and they came back in better shape. So either AAA studios can really suck a dick, or somehow this thing is running on dreams and rainbows, doomed to fall any minute.

Looks like the test server is now officially a test server. It will be live all week or until the users kill it. Then on Saturday, 4/27, they're taking it down and wiping for a fresh start on the official server launch.

This link should work for the CoJ discord for 24 hours.

2. If Tequila doesn't automatically download issue i24 for you, use this magnet link in any torrent browser.
It's important that the COH folder is in the same directory as Tequila!


3. Direct your Tequila/Island Rum towards your I24 download during install. (If your client automatically downloaded it, this shouldn't be an issue)

I did not need the torrent, which a lot of people seemed to? I also didn't have the re-verify option at the bottom. If something seemed to be hung up I restarted tequila and it all downloaded no problem. Also make sure you create an account and then sign in on the step 4 page, then open step 5 in another tab with the first page open. You should already be logged and see the game account, as it says, is a separate option with a different name and password lower on the page.

Also: They seemed to make a pretty clear declaration that NCSoft knows about this, and has basically given them a pass in exchange for purging the old character data and never going pay-to-play.

So I'm a super ultra brain genius and forgot to set the link to never expire.

Server admins are being threatened with legal action, as predicted.
Top

Here's what codebase I've been able to find, but fuck.

Now, the project lead guy is saying throttle back, the same guy who was doom and gloom in that screenshot.

EDIT: Okay, so now that the server admin has taken a few deep breaths and thought things through and obtained all the information,

There is apparently no legal action at the moment by NCSoft. They don't have some binaries that they need to make things go, and they're working to get those restored so they can make it go. Once they get that sorted out, they're going to bring the server back online.
Top

Things are looking complicated right now, I'm trying to follow it but 4chan's swarming the discord and it's making real information hard to come by.

Seems like what happened is that a channer hoaxed the admin who was actually hosting the server, saying they were facing a DMCA suit in the next couple days and facing seven digit fines, and she panicked, wiping the server to try to protect herself and removing herself from the project.

I guess most people on Earth would hear "4chan's swarming the discord" as white noise word salad. Sounds like a nice way to live.
Top

Aaaaaand fuck that place for good. 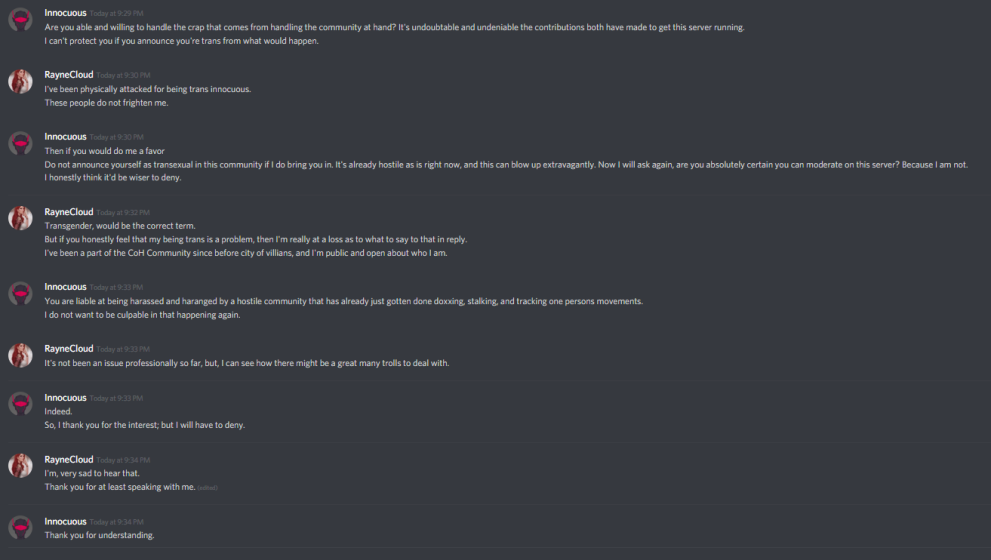 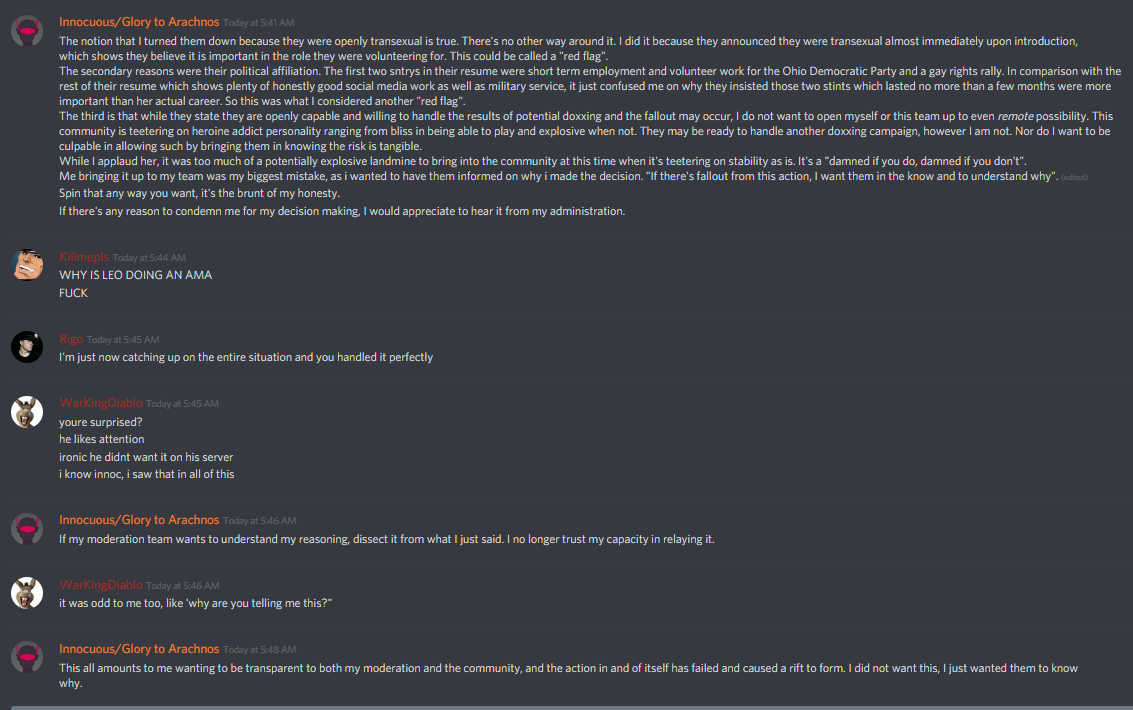 The subreddit has spun up a new discord with a new effort to assemble a server, unsure if it'll get off the ground, but they're committed to a prejudice-free environment for it and that's more important to me than actually playing.

...can't say as I'm *surprised* to see that sort of crap where gamers, superhero fans, and software developers all intersect, but man, it sure is sad.
Top
Post Reply
51 posts