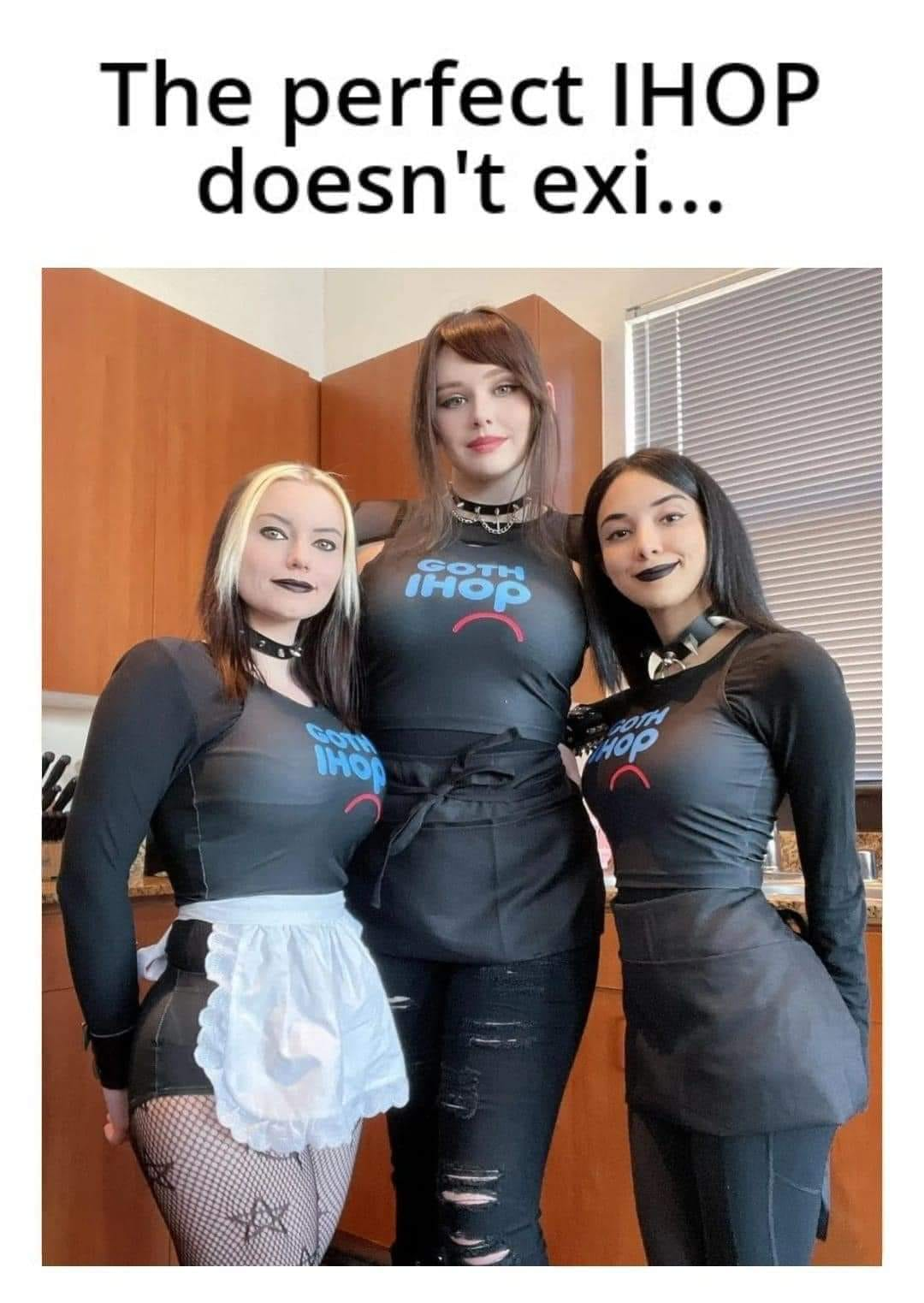 Oh, I'd wondered why they were all wearing aprons in that previous post.
Top

When you shoot your shot with a goth girl.

When you shoot your shot with a goth girl.

YOUNGK LADY I BEG OF YOU, LET ME BACK IN THE CASTLE BEFORE THE SUN....OH NOOOO! *a plume of sparkles and tomb dust rises from the windowsill* 700 YEARS DOWN THE PRIVYYYY.....
Placeholder for something witty that doesn't make me sound like an asshole
Top

The narrator is dull as a brick and needs a kick in the junk, but it's still a fun list.

Some quality posts since I last checked in here as usual, but special thanks to Kishi and Grath for feeding my addiction to ridiculous hot girl kabedon goth memes.

A++ good job, and may your videogames result in victory.

not the toenail being ripped off

I enjoy pain in my videogames, not in my body 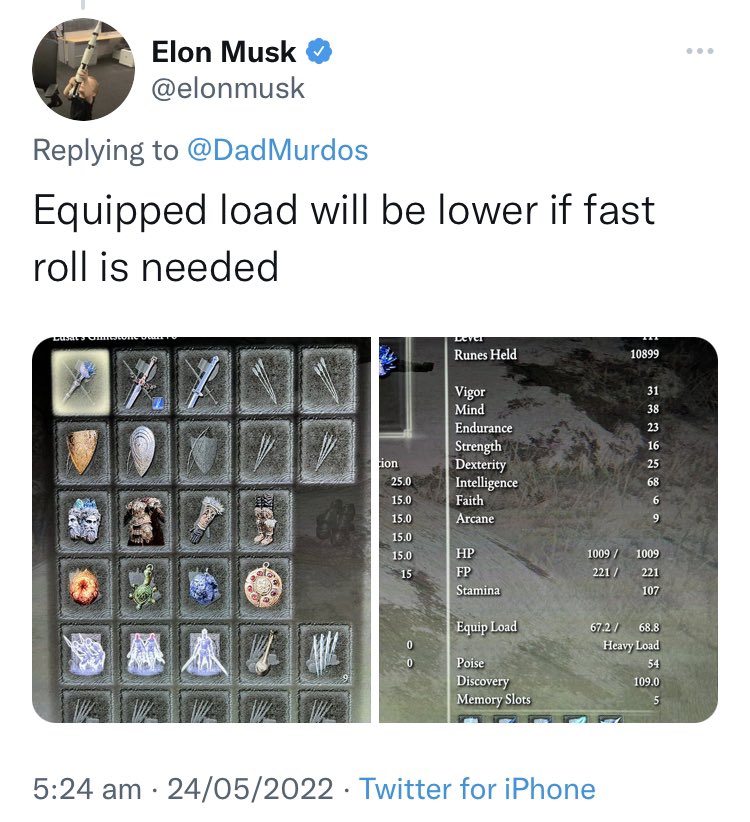 tl;dr: His build is atrociously bad.

It's a metaphor for his "genius": it's actually super shitty and messy. There's sub-par builds, and then there's just BAD builds, and his is way on the bad side.

If you want the specifics, where to start:

He's over level 100 (looks like 111 maybe, hard to tell) and his vigor is 31. There's a meme in the Elden Ring community about how bad players don't level up their Vigor (the HP stat) and then get fucking one or two shot by everything. You should have AT LEAST 40 vigor by level 110, no matter what build. Even super dedicated casters run around 35 at that high a level.

His Mind is 38 (7 higher than Vigor!) and that's your MP/Mana. There's nothing wrong with having 38 Mind on a caster build, mind you, but he seems like he's a melee/caster hybrid and you should basically NEVER have it higher than your vigor.

He's got 3 separate spirit ashes equipped in his inventory. You can only summon one per fight, once. Having three technically isn't useless as maybe you might need different spirits for different situations, but it's still sloppy and weird. Most people use two at the most.

His equip load is 67.2 out of 68.8. Under it, where it says "Heavy Load" means he is "fatrolling" which is a really really bad thing. It increases your recovery frames (the time you spend helpless and immobile after a roll) from something like 8 to 16 or some shit. And reduces stamina recovery by 20%. It's so, so bad. If you haven't played a Souls game, rolling is something you will be doing A LOT. It's your lifeline and how you avoid being killed by otherwise unavoidable attacks.

The reason he's so overloaded is:

1. his endurance is fairly low at 23. This isn't a problem in itself, as builds that focus on staying at range often don't put much into endurance. But then they wear light armor.

2. he's wearing heavy armor (Radahn's) in all his slots except head. Not a problem if you're running higher endurance, but he's not.

3. in addition, he has three weapons equipped, and a bow. Again, that's fine, if you run the endurance to support having that many options at your fingertips. Most people run at most 2 weapons and a bow. I myself hyper min-max so I'm only using my one chosen weapon so I can wear the heaviest armor possible to reduce the most incoming damage without having to put every single point into endurance.

You can only use one shield at a time if they're equipped to the same hand (and they are). They are very heavy. Each can eat up 5-12 units of weight.

So he's basically just lugging around an extra 8 or so weight for no reason at all.

This is all hyper nerd optimization shit, of course, but here's the thing.

Elon pretends to be a super genius but can't figure out a simple effective build in a videogame. He has a lot of minor flaws and a few glaring ones. Again, play the game the way you want to, and plenty of people do meme builds or intentionally funny/sub-par builds. But this is just plain bad. Coming from any other person in the world, this wouldn't be a funny image. It'd just be some noob who didn't know how to build his character and gear loadout well.

You almost wonder if it's deliberately bad just to troll.

What would be really funny if is he paid or forced someone to build his character, and they left all the gear shitty knowing Muskie is too stupid know any better.

Not that I think Muskie is secretly not-that-stupid, I just think he's such a spastic twat I'm kind of skeptical that he has the focus or patience to play a character to level 11, let alone level 111.

Important of note is that Musk's tweet said he "experienced" the game and has not gone on to engage with any of the many, many, MANY replies. There is absolutely no way he beat the game with that build, and if he was able to do it, there's no way someone with his need for attention wouldn't have a twitch.

I am a little offended by the shield thing, though. I had two shield on my first build. The difference being: it was a quality build, I was still on med roll, it was before the barrier nerf so shielding was pretty OP, and the second shield was the mirror shield, meaning I could swap between perfect physical defense and nearly perfect magic defense (his first shield is the common base one everyone ends up using, his second is a decent magic shield that is easy to get but not great for pve)

Other issues with his build:
-He has a staff for a STR/INT build with what might have been just starting STR for some classes.
-No talismans or visible synergy with the wand that uses a lot of extra FP. /the wonderous flask is empty in the screenshot, so can't tell if he even knows about the unlimited FP boost. Memory that high implies he was just trying to cast normally.
-A really, REALLY bad selection of sorceries for an almost pure INT build.
-3 soul ashes that help you in combat, but none of the good ones.
-low memory slots for a caster build (means he didn't solve a single one of the puzzles that reward them, just the ones handed to you by plot)
-head piece is fine, could/should be better, but the least bad part of the INT side of the build. Armor is all high physical, just very Giant Dad meme overuse territory.
-second weapon is rogier's rapier. A pretty bad DEX/INT weapon whose main benefit is being given to you probably +1/2 ranks higher than you have the stones for at that point in the story.
-third weapon is moonviel. Was the most OP weapon in the game, has since been outclasses by buffs to other weapons and stats, but not been weakened. However this is also primarily a DEX weapon.
-health talisman is the +1, which is weird because it's kind of out of the way, where as the +2 you literally run over on your way to the final boss.
-sorcery boost talisman also the lower level version, but easier to get, and also next to the comet spell he has equipped, which is also a lower level variant of another thing, but the upgrade for that is pretty much given to you right after a boss fight
-turtle talisman increases stam recovery. A better option than stam boosting for his very low END, but still a pretty much wasted slot for a heavy magic build.
-Radagon's Soreseal. It boosts all your physical attributes by +5 for +15% more damage received. He has a magic build, yes, there is a magic version of this. The only reason I can imagine using this is because it gives the exact +5 he needs from prisoner start stats to use the golden shield. He could certainly use the VIT and END, too. But come on. And remember, his VIT and END invested are both actually 5 points lower than shown because of this.
-Finally his level. I have beaten the game at level 30 (I'm not very good, I needed support and did a lot of cheesing) but every basic build I have solo'd with was at 120+. I absolutely do not believe that musk got to even the last boss, nevermind the secret boss, at such a low level. And I don't think he beat them himself at all, but again, not at that level without some frustrated boosting.

edit: I don't know sorceries very well so I didn't get into specifics. But because I have no life I checked which each was and we have:
-Zamor Ice Storm, cold spell: never seen it used, but it's on the path in the third-to-last area on the main game route. Likely just the last thing he found and equipped expecting it to be good
-Night Comet, night spell: see two below except it's worse for pve because it's a less visible and unparryable version for pvp
-Magic Glintblade, glintstone spell: literally the starting spell for the class he took.
- Comet, glintstone: rarely used because it's directly outclassed by what is also arguably the best spell in the game (on the right build) Comet Azur. Azur can be found for free in the open world at the dead end of a long and direct route.
- Loretta's Greatbow, carian spell: pretty decent spell I see a lot of people use. Is directly upgraded (for a high INT/MEM build) by a guaranteed boss drop on a mandatory fight to enter the hardest area of the game.


In summary: like Friday said, there is absolutely no serious problem with this build (other than trying to convince anyone he beat that game at that level) and any number of casual players may have a similar one in. But like, it's not something you post to brag about.

I stopped using shields entirely forever after the mid-point of ds2, so forgive me for not realizing there's a legit reason to have an anti-phys and anti-magic shield equipped. But still, as you point out, you were med load and not fucking fatrolling.

Mongrel wrote:Not that I think Muskie is secretly not-that-stupid, I just think he's such a spastic twat I'm kind of skeptical that he has the focus or patience to play a character to level 11, let alone level 111.

I'm sure I've gone on about it before, but I can't figure out my older brother sometimes. Math and computer wizard, teaches math at a college, so he's smart there. Otherwise, he's dumb as a post.

I try not to pounce on most people's builds and stuff; as someone boneheaded enough to still run a lightning claymore in DS3 should probably sit down and let the grown-ups talk. But Muskie isn't most people, and even I know heavy loads are generally something to be avoided. I learned the hard way how they can go very very wrong.