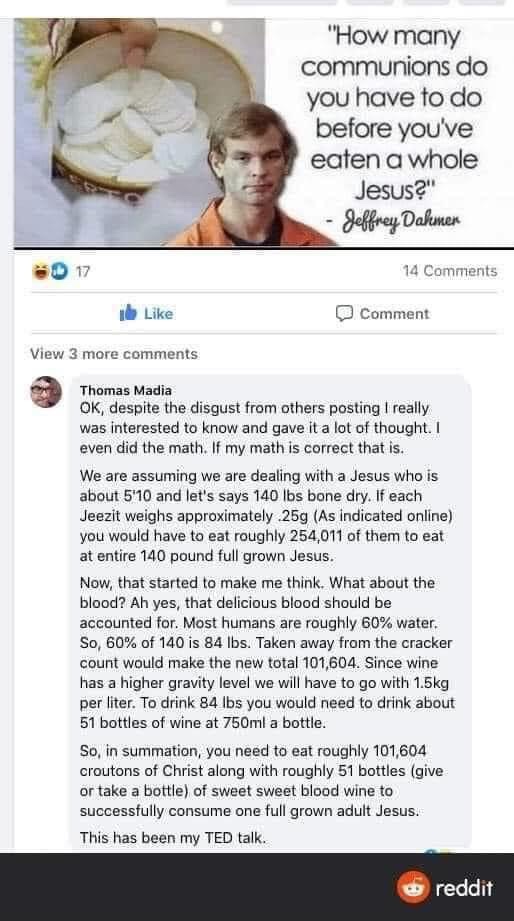 My mother always told me that Jesus was already inside of us which I took to mean we had already eaten him and the communion was to just give him some snacks to nibble on.

My favourite part is his name for the wafers.

what in the almighty fuck

- Apollo 10 still holds the all-time speed record for any sort of vehicle ever with any actual humans aboard (39,897 km/h)
- The ascent module was found last year after being missing for decades (!), and is the only once-crewed spacecraft still in outer space without a crew. SPOOKY ABANDONED SPACE HOUSE.

I wonder what Charles Schulz thought of them naming the command module Charlie Brown and the landing module Snoopy.

Büge wrote:I wonder what Charles Schulz thought of them naming the command module Charlie Brown and the landing module Snoopy.

I remember there was a line about it in one of the Peanuts animated specials to the effect of "That's the most amazing coincidence I've ever heard."

Which was kind of a running gag. They said the same thing when they talked about Linus and Lucy by Vince Guaraldi.
Top

Oh the Apollo 10 article mentioned that too; Schultz made official mission-related art for NASA, so presumably he was at least okay with it. 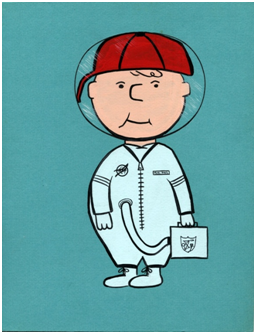 Apparently the senior command at NASA was annoyed enough by this, such that they ordered astronauts for subsequent missions to only use "dignified" names for their craft. Which in no way stopped later astronauts: When John Young finally got his turn to visit the moon in command of Apollo 16, he and the crew named their command module "Casper" (yes, after the Friendly Ghost).

On the other hand, they changed "Serenity" to "Tranquility" once somebody figured out why it got the most votes (or second-most, after Colbert mounted a write-in campaign).
Top

It's always kind of funny when that happens with sci-fi, where expected style or nomenclature are decided years or even decades before the technology arrives.

This is a Union memorial though.

Also I just spent a little while scrolling back through a couple years worth of this thread and wow, what a trip. So much weird and crazy and cool shit I forgot about.

Seeing Thad's "nothing that ends with "Because of Hitler" can be considered fun", had me giggling for a good half hour.

Can just see Washington in the room nervously adjusting his cravat.

Reminder that the British Empire abolished slavery before the colonies and without a war - but also paid slaveowners reparations until 2015!

In the UK, holding a shotgun license (basically the only gun license left) allows you to legally own smoothbore cannon.

But it sure bears remembering when the argument about if reparations being just for the other side comes up.

Also to be very technical, I didn't describe it correctly.

It was only the debt that was being paid up until 2015 (which was effectively insignificant at that point, like Germany finishing paying off their WWI reparations around the same time).

The slaveholders were all paid up front, which is 100% fine if it gets the job done.

Today I learned that the US Postal Service operates a mule train that delivers mail to the Havasupai Tribe in the Grand Canyon.