Crick wrote:Admittedly, I don't know a ton about Metal Gear-- and maybe this is splitting hairs-- but in the strictest sense, I don't think he sounds fascist. He doesn't seem to be promoting, like, an ethnostate, he's not an ultranationalist, and he doesn't seem to be scapgoating minorities.

An authoritarian perhaps, or... some kind of weird... libertarian?

I think I agree with this. Big Boss is an Authoritarian Libertarian, but since this is a world with no real ethnic racism, and portable nuke platforms, and at least 75% of the population is hardcore masochistic; he can't really tilt fully into fascist.

related: @othatsraspberry on twitter has been doing comics of her MGS series playthrough, currently on 4. She doesn't seem to be posting on other platforms. 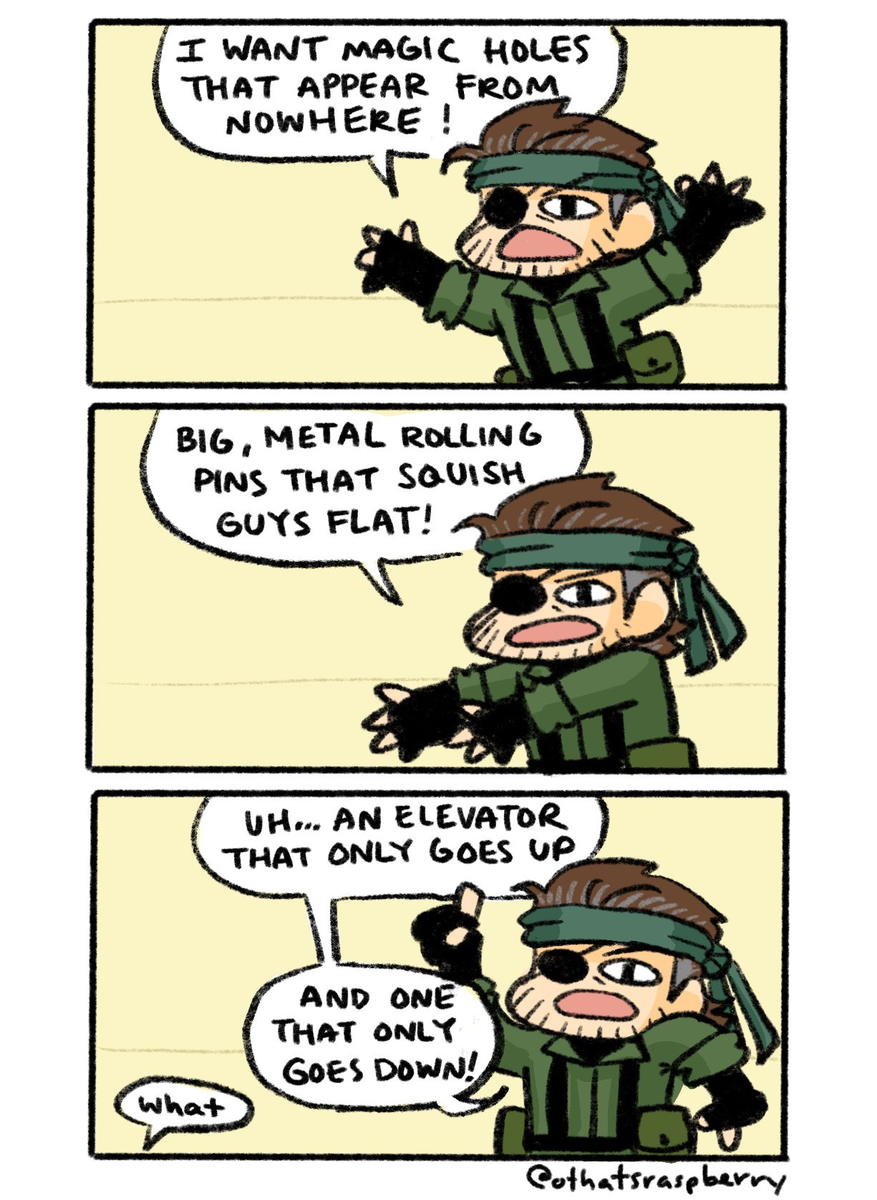 Mongrel wrote:Everything else aside, the morality of seeking a nuclear deterrent isn't inherently evil, rather the morality would depend on the circumstances and intentions.

Yeah! Outside of the moral quandary of perpetuating the threat of nuclear weapons, I pretty much agree.

I think he's bad not just because he's seeking a deterrent from the US, but because he's deterring them from stopping his cult-ish group of unscrupulous (maybe? I don't know a ton about the lore) super soldiers for hire.
Top

hng's video has spoilers for MGSV but the main arguments it makes are as follows:

- Big Boss never actually employed child soldiers. He did keep war orphans, which he planned to train into soldiers, which he would use in other wars, which would create more war orphans for him to recruit. He didn't specifically field child soldiers, he just thought about it, and planned to wage continuous war in order to create a world where soldiers like him were always relevant.
- Big Boss did allow the use of torture, but the video argues that it was justified as part of the greater good, even though torture didn't uncover any useful information, and was mainly carried out because Ocelot likes torture and Miller was paranoid.
- He did kidnap a scientist to work on his Metal Gear project, but that's fine because he needed him as hostage anyway to prevent the UN from just bombing his rogue nuclear compound, so it's self-defence.
- Big Boss did steal nukes from other countries which were decomissioning them, with the goal of becoming a rogue nuclear power himself. This is justified because it's better than corrupt officials selling off those nukes to other, less scrupulous rogue nuclear powers.
Top

I didn't say it was a perfect video. But yeah, his argument that torture is good actually is gross and I forgot that point when I posted it.
Top

beatbandito wrote:I think I agree with this. Big Boss is an Authoritarian Libertarian, but since this is a world with no real ethnic racism, and portable nuke platforms, and at least 75% of the population is hardcore masochistic; he can't really tilt fully into fascist.

I thought authoritarian and libertarian were supposed to be opposites
Top

He thinks everyone should be free and is using dominating military force (he believes) to make that happen. What do you call that?

beatbandito wrote:He thinks everyone should be free and is using dominating military force (he believes) to make that happen. What do you call that?

The basis for some amazing video games?
Top

The inherent contradiction of libertarianism
How fleeting are all human passions compared with the massive continuity of ducks.
Top

Well, it seems from the poll and the comments that Big Boss is regarded as more a bad guy than a good one, but not a fascist and more just a weirdo military dude. Which is, well, sort of the preconceived notion I had about him. It's just that twitter thing threw me a bit, calling him a fascist dad. It was probably just being glib.

Big Boss is exactly whatever the current video game needs to be. In Metal Gear 1, he's the protagonist's trusty mentor, until he needs to be the end boss. In Metal Gear 2, he's the bad guy now, and all the war crimes or wahtever that justify Solid Snake's mission are Big Boss' fault. Solid Snake's the good guy because he's the guy you play as. In all the games where you play as Big Boss, it's Big Boss who's heroic and brave, and the worst he does is enabling Miller's desire for revenge.
Top

I put him at an 8 and didn't realize it'd be such an outlier. I dunno, in a world where all this whacked out shit exists because a milf died and a bunch of CIA dickheads had complicated ideas about that, I can see it. Hell, I'd would put a bunch of you assholes on an oil rig and nick some nukes at the drop of literally any hat at this point if that were even remotely an option. I'd have given him a 9 if it weren't for all the torture, but that's mostly down to Ocelot. Hard to make excuses for but he's, y'know, that friend.

I feel like having Ocelot around is a big mark in the bad guy column, yeah.