I think people on The Internet tend to forget a lot.

I could use some suggestions from the pet people, specifically cat, on where and what one should get.

I know the most basics, litter and litterbox, food and bowls, bed, some simulation toys like feather stick and jingle balls, brush, collars/flea collars. I grew up in cat houses, but getting possibly upper-kitten-aged cats two at once I want to make sure I'm covering everything, and not the more "they'll live" attitude our family may have had when I was a kid.

Beyond that, for things like cat towers / scratch posts, running wheels or similar does anyone have a preferred maker or suggestions on anything not mentioned above, or if anything is bunk?

Our living room has for years now looked like an Amazon fulfillment centre.

Pratchett wrote a non-fiction book about this, everything in it is true. https://www.goodreads.com/book/show/344 ... erated_Cat
Top

All my family's cats have always been free wheeling outdoor cats. But my first week here I saw another local cat unfortunately ended in the roadway and now every time I hear an engine speed past to get to the highway I think that my precious babies will never leave the house.

The modern view seems to be that freewheeling outdoor cats are a mistake of the past, given the absurd damage they do to everything smaller than them as an invasive species we're supposed to be keeping indoor ones only and sterlizing the semi-feral populations. People get very intense about this.
Top

mharr wrote:The modern view seems to be that freewheeling outdoor cats are a mistake of the past, given the absurd damage they do to everything smaller than them as an invasive species we're supposed to be keeping indoor ones only and sterlizing the semi-feral populations. People get very intense about this.

Yeah, indoor is best. Though if you can give them the run of a small outdoor area (good luck trying to cat-proof a backyard, but I suppose it's not outright impossible), that's a nice thing to do. A caged-in outdoor cat-run they can traipse out to at their leisure is also an option.

We let ours out on our balcony, but it was screened up tight - at least until a week ago when they replaced the railings, which involved tearing out the screen. So now we need to get it wired up again, because no fucking way are we letting them out on their own recognizance on a 6th-floor balcony with no safety net. Especially given Jake's tendency to glitch outside the old railing(!) and Elwood's love of catching cicadas which would perch on the old netting.

beatbandito wrote:All my family's cats have always been free wheeling outdoor cats. But my first week here I saw another local cat unfortunately ended in the roadway and now every time I hear an engine speed past to get to the highway I think that my precious babies will never leave the house.

One of my classmates in the ultrasound program hailed from the tiny Caribbean island of Montserrat. She lived on a hillside overlooking the main circumferential road around the island. Any cats she tried to take in, eventually ended up under a truck on that highway ;____;
Placeholder for something witty that doesn't make me sound like an asshole
Top 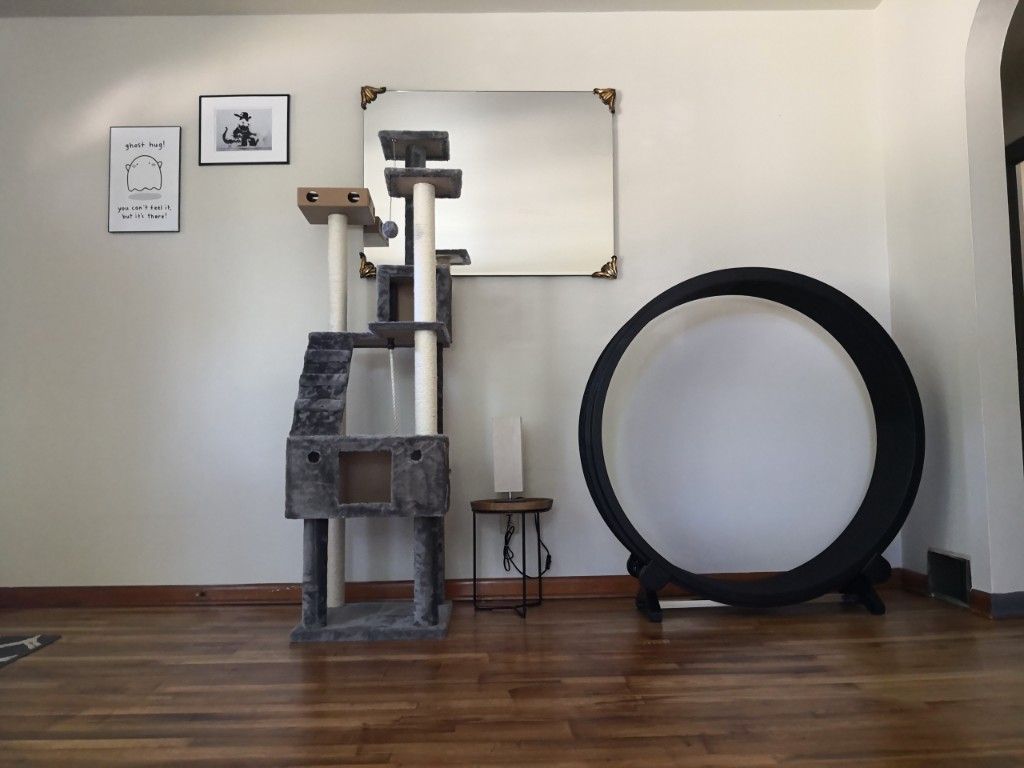 Doglet surprised what looked like a young starving stray ginger cat in the village today, no idea if there's anything useful I can do about that. Anyone have experience with this sort of thing? (It was on the road directly bordering hillside woodland, so they have infinity hiding places up there.)
Top

Starr suggested trying to put down a little fishies or something similar with a strong odour. While watching from a safe, but nearby distance so you can scoop up anybody that pokes out.

Obviously some other animals might have a go (and that's fine as long as you don't end up with a single repeat customer who has no business there), so bring a fair amount but only put down a little. 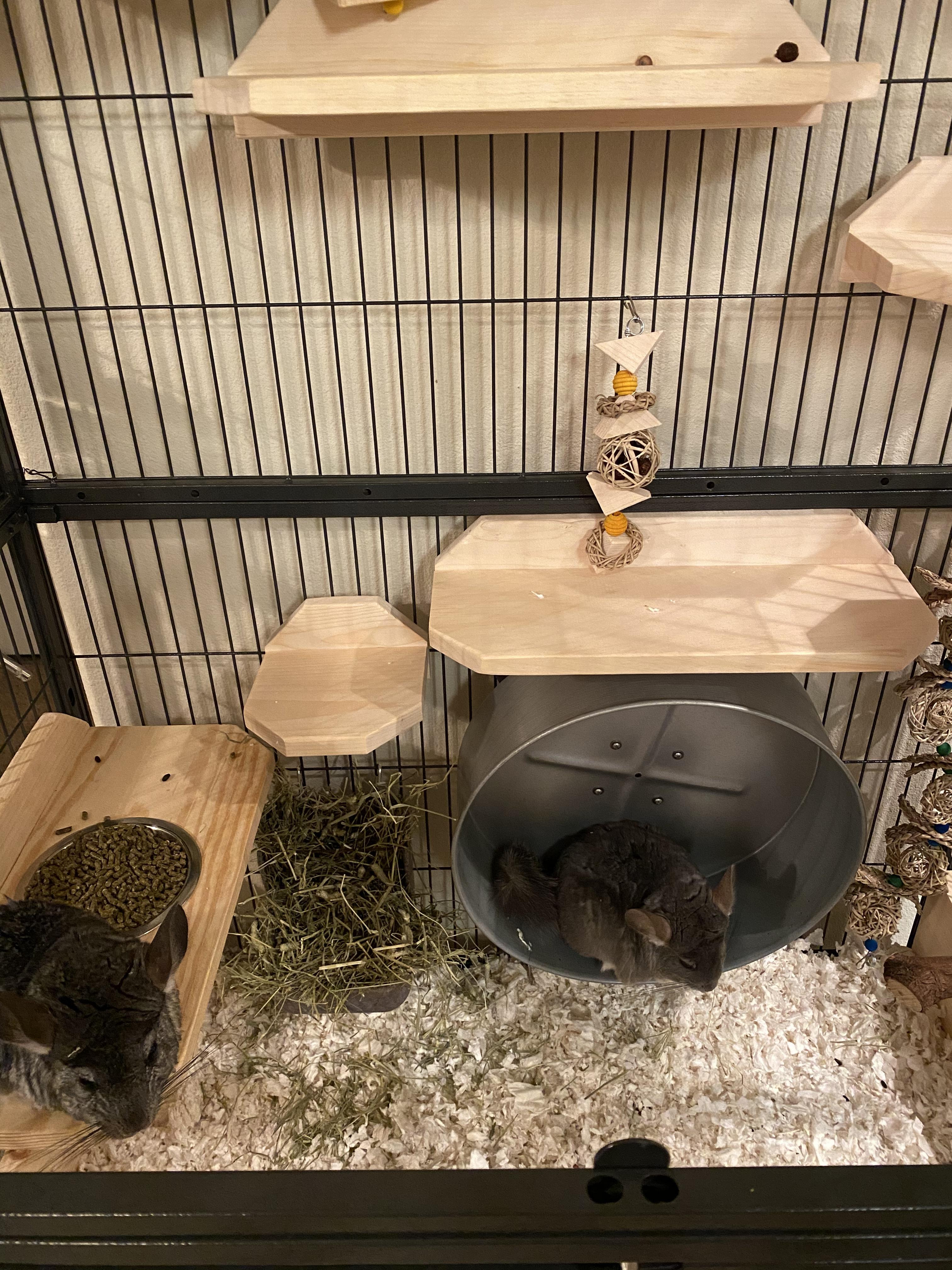 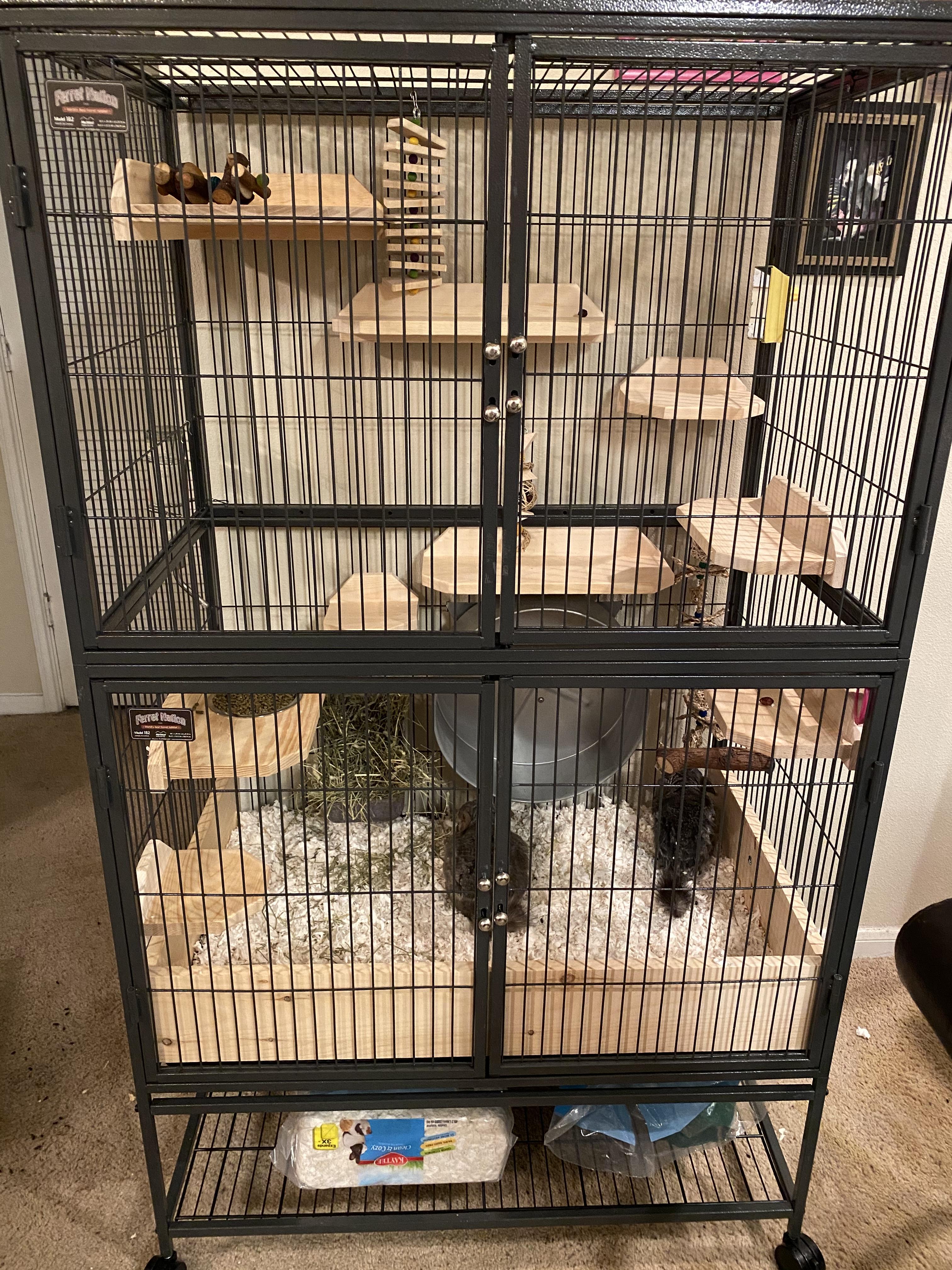 we've put it off for a long time because it was a pretty big investment to completely overhaul the setup, but since we had some extra stimulus money and feel pretty secure right now, these absolute kings finally have the palace they deserve.

I had a dog for about three hours today. 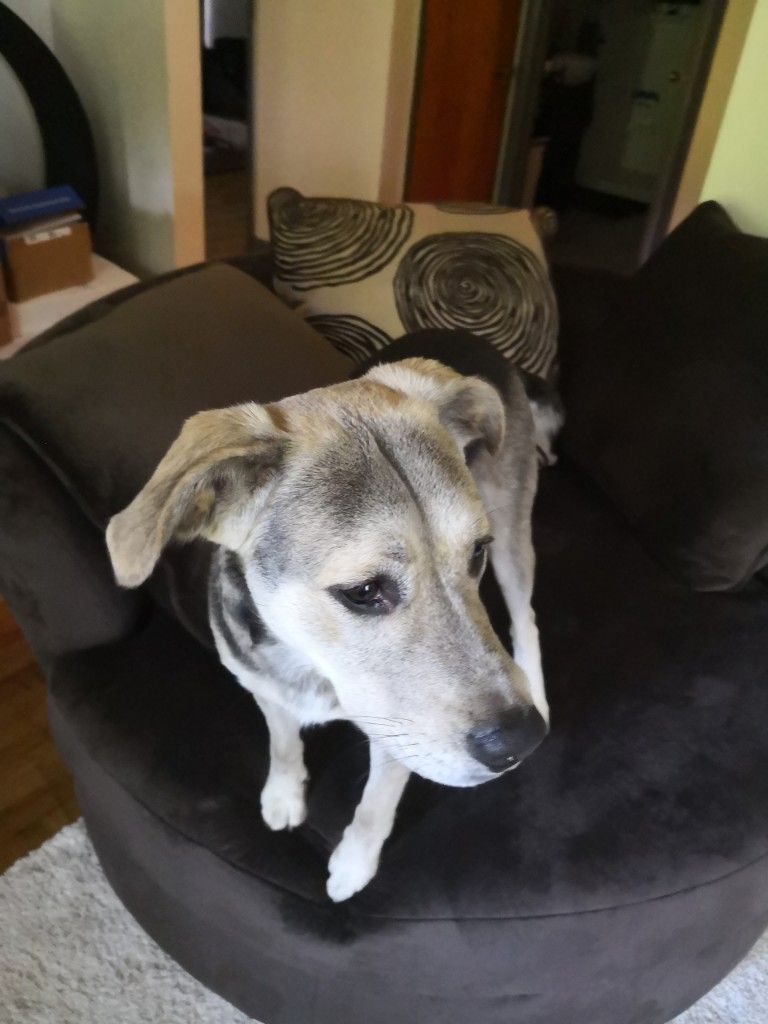 I found him wandering through my yard around 1 and he ran off when I tried to get his attention. About an hour later I saw him again jumping around a car that had just pulled up to one of my neighbors. At first I assumed that reaction meant that was the owner, but when I went inside and heard her honking and shouting I went back out and she was apparently just trapped in her car scared of this random dog. At that point I was armed with a can of cat food I had taken from my mom after Lily passed and managed to lead him in my house.

Did some posting on craigslist and Next Door, put a crappy sign in my window since I was scared to open the door. Around 5, still no response from my posts and no shelters or vets being able to help, I resign myself to having him in for the night. Got him in the car with a terrible twine-based leash and collar and went to the pet store to get him properly outfitted for a walk, plus some actual dog food and a toy so he'd leave the various decorative stuffed animals alone.

I get him out the car back at my house and before I can get him to the end of the driveway someone runs up "oh my gosh, did you just find that dog? Milo, Milo!" The dog did seem to react to him better than he did me at first, so I begrudgingly accepted that my visitor was already leaving, right after I spent like $40 on stuff for 'em.

It was a sad experience, certainly that timing. I absolutely could not have kept him permanently, the entire time he was in the house he didn't stop jumping and stomping around chewing on or knocking over everything. But in the car he kind of settled in the back leaning over the center console storage thing keeping his head and paws in my lap the entire time. Then when we first got back he ran right to my door while I was trying to lead him to the road. And it really made me realize how much I need an animal to give me a reason to do anything. Seeing drool still on the couches and chipped paint on the hallway corners I'm not even frustrated that this random dog roughed up my house and cost me money, I just wish I still had him here to rub his face some more.

Haha, we had a similar thing happen a few years back with a cat we found. We put up posters all over and didn't get any reply, so we took him to the vet for a checkup, see if he had a chip, etc.

Right after we got home, having just spent $90, owner shows up.

It's not like you mind all that much, because it's right thing to do and there's no point being resentful about it, but it's still a case of "Man, your timing is shit".

I guess I never posted about it here, but I ended up adopting two senior male brothers just over a week ago. They've been mostly completely avoiding me (and one still is) but as of yesterday one has warmed up enough to let me pet him occasionally, and he dances to let me know when it's time.

Will do a full post about them when I'm bored at some point and remember to.

Oh right yeah, we've completed our emergency exit to Scotland and are installed in a proper house, a month's electricity and basic floors and furniture provided by local government because apparently people matter to them, great neighbors and the scenery is as highland as the lowlands get. Dog is utterly happy to have a proper garden, friends and greenery everywhere on walks and almost no traffic, cat is busily fighting her way up the local hierarchy as normal and we're looking forward to her stunning a viper and depositing it with us as a housewarming gift.
Top 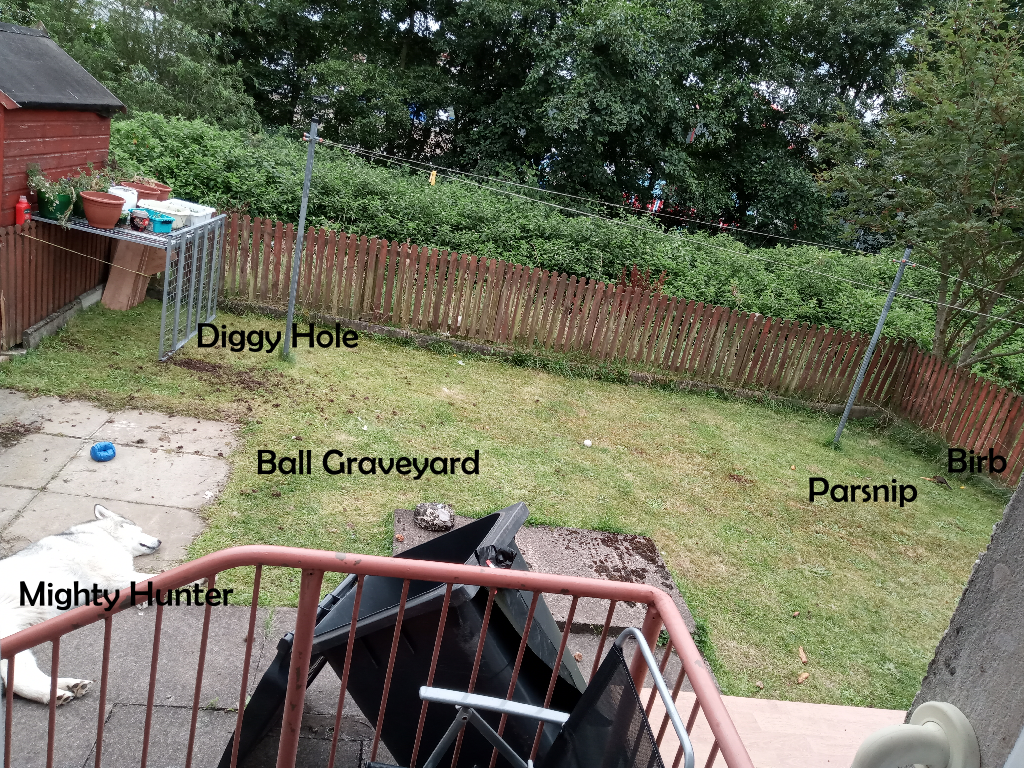 I like the Chair Jail and the door seemingly made from concrete.