Bezos in particular is worth 25$ Billion more than he was before Covid hit the US.

Some more fun context is that the IMF recently released a prediction that the entire global economy will shrink by at least a full 3% this year.

Speaking of which, this is the month the evictions start.

This won't even help landlords. When the vacancies cause property values to plummet, so will house prices.

Welp, the rule preventing studios from owning theaters was nice while it lasted.
Top

At least they waited until theaters were already dead.

You don't pull out the rondel until your foe is on the ground. 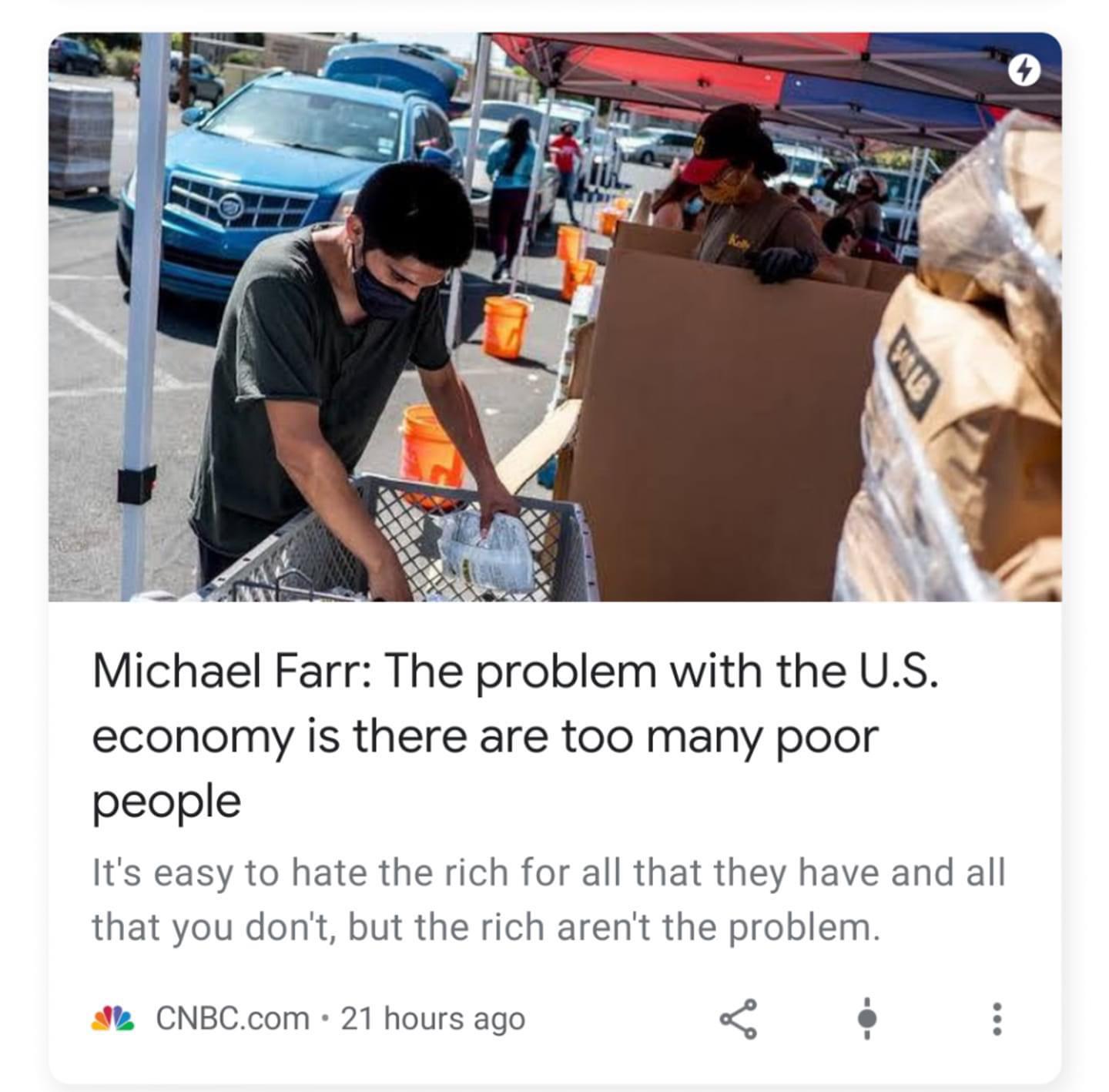 (the full article isn't any better.)

The article seems to cover most of the important points about needing to actually meaningfully invest in long-term endeavors instead of short-term patches.
Top

Evanier's occasionally told stories of his father working for the IRS and how any time he audited somebody well-connected (read: somebody who knew Nixon or Reagan), it would result in an angry phone call from his supervisor telling him they were off-limits.
Top

Democrats call for Congress to rein in, break up Big Tech

I don't know that breaking up the big tech companies is going to do much to help with competition; separating Facebook from Instagram at least adds some competition to social networking, but, say, splitting Google's ad business off from its search business doesn't do anything to decrease either division's dominance in its respective market.

Which isn't to say it shouldn't be done. It should. These mergers shouldn't have been allowed in the first goddamn place. Break up Google, break up Facebook, break up Amazon, break up AT&T again. We need to reevaluate our entire approach to antitrust -- as in, we should go back to having one -- and this, at least, is a step in that direction.
Top

Sheldon Whitehouse does a pretty good job laying out how Republicans have rigged the Supreme Court to consistently rule 5-4 in favor of wealthy donors. That's not going to be new information to anybody here but it's succinctly put.
Top

Remember "The Free State Project" and New Hampshire? Well it was preceded by "The Free Town Project" in a small town in the same state.

Beth Elderkin at io9: Comics, Contracts, and Covid: Inside the Scandal at Terrific Production

Terrific Production is a comics publisher (or will be, if it ever gets around to publishing any comics) owned by Andrew Rev. Rev ran a company called Comico back during the '90s bubble, where he developed a reputation for not paying people (the article recounts a story of Bill Willingham driving to Comico headquarters -- in Chicago, from Seattle -- and demanding that Rev write him a check or he'd start breaking shit).

It would seem that Rev's back up to his old tricks, and he's been focusing specifically on recruiting inexperienced Filipino artists who don't know who he is and aren't familiar with how the comics industry typically works.

For three of the creators we spoke to—Mainé, Urdinola, and Casas—the dispute was because of the contract. Rev would claim that the first contracts they’d signed were invalid for things like general mistakes, Shepard sending it without his approval, Rev never signing it, or it not coming from a Terrific Production email address. Mainé, whose contract had Rev’s signature, said Rev accused him of “forgery.” Rev repeated this accusation to io9 (though he didn’t mention Mainé by name), and Shepard backed it up in his only response to our questions. Shepard, identifying the person as Mainé, claimed Mainé “tried to pull a con on us. A wrong page rate and Euros vs USD,” but emails obtained by io9 show Shepard agreeing to Mainé’s rate and preferred currency, and sending him the contract with Rev’s signature. We asked Shepard to provide documentation to support his account, but he didn’t reply. Rev suggested we “get an expert to compare signatures,” so we asked him to provide examples. He didn’t reply to our request.

The article's worth a read, at least for the Bill Willingham anecdotes. Shit's wild.

(via Heidi MacDonald at the Beat)
Top

I have various conflicting opinions about this. First and foremost, I never assume noble intentions from the Barr DoJ. Barr doesn't give a shit about Google's business practices; this is political retaliation because Trump is mad at Google about something.

But that doesn't mean that I don't think Google engaged in anticompetitive behavior, or that I don't want the suit to succeed.

I suspect if it does, we're going to end up with a slap on the wrist like Microsoft got, but what I'd really like to see is a wholesale change in antitrust enforcement and an abandonment of the past forty years of Chicago School "monopolies are okay as long as prices stay low" philosophy. I'm not holding my breath, but who knows, maybe we're due.
Top

There's no possible way that hitting Google while standing in the shadow of Amazon is going to make a lasting positive change.

I think that depends on whether Google is the end of it or just the start. Big Tech has become a popular punching bag for politicians of both major parties. This is election-year posturing, but there's plenty more election-year posturing to go around. I think Facebook is probably a juicier and likelier target than Amazon at this point, but I won't rule out that they'll get around to Amazon eventually.

Of course what we really need is to expand antitrust enforcement across the board, not just against whatever Big Tech company the current president is currently mad at, but against any company using anticompetitive behavior in any sector. AT&T, looking at you. Again.
Top
Post Reply
323 posts